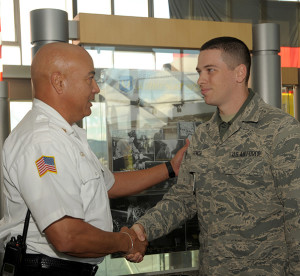 There are probably few people who aren’t first responders who would run into a burning building for a stranger, but that’s exactly what one Airman assigned to the 721st Aerial Port Squadron at Ramstein Air Base, Germany, did.

The evening of Sept. 21, 2016 was probably as normal as it could be for new father Senior Airman Corey French, 721st APS passenger service agent. He was enjoying the night with four generations of women dear to him – his grandmother-in-law, mother-in-law, wife and their 3-month-old daughter when a shrill sound pierced the night sky – a fire alarm.

According to French, fire alarms sounding in base housing aren’t uncommon, but he decided to take a look anyway.

“I was curious, so I just popped my head out the front window of my balcony,” French said. “I looked down and saw fire in the hallway (of another building).”

French ran downstairs and across the street to confirm there was indeed an ongoing fire in the building. After doing so, he ran back to his building to grab the fire extinguisher and proceeded into an unknown situation for a person he did not know.

“The Airman ran out of his home and was like, ‘In here,’” French recalled. “I saw there was smoke everywhere as I ran into their kitchen and the whole oven was ablaze. I doused the flames as best I could, and told them to grab their puppy and get out of the house. It all happened very quickly.”

Though the fire had been enraged by attempts to put it out with a blanket and water, French was able to put it out and make sure the family was safe due to the knowledge he gained as a fire extinguisher inspector before enlisting in the Air Force.

“I’ve been doing this business for 39 years, and there’s only (been) a handful of folks in my time who have actually taken the extinguisher and acted that quickly to prevent a conflagration in a kitchen,” Rabonza said.  “Most of the time, we are there for hours because the fire burns for an extended period of time … our job is to help people when they are having a really bad day, and you kept them from having a really bad day.”

To honor French’s extraordinary actions, Rabonza committed a rare act of his own – he coined French with the 86th CES Fire Department coin.

“I can tell you I’ve given this coin to one other person, and this young man is getting one of my coins,” Rabonza said. “I’m very pleased for the opportunity to be able to do this.”

In addition to making French one of the few people to own his coin, Rabonza joined Lt. Col. George Nichols, 86th CES commander, in naming French the grand marshal for the kickoff parade for Fire Prevention Week.

Though French has been recognized by his personal and base leaders, as well as thanked profusely by the young Airman he helped, he prefers to think of his deeds as normal.

“I just hope the people involved in this learn from this in case there is a next time. I’m just glad everyone got away safe and no one got seriously injured,” French said. “I’m happy to get recognized for it, but I would hope anyone else would do the same thing I did.”