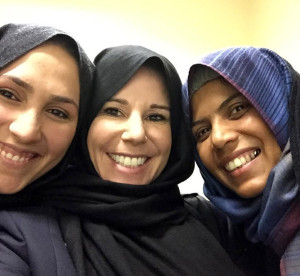 Marci Strathearn, middle, poses for a photograph with her Afghan colleagues. Strathearn, a former Army captain, has been in Afghanistan for the past 18 months trying to improve women’s rights in the male-dominated country as an advisor for the U.S. Defense Department’s Ministry of Defense Advisers program. She recently won a national award for her ongoing commitment to gender equality.

While not a rare sight in America, the woman’s briefing to the male officials, including the Afghan finance and budget director, was still a big win for the former U.S. Army captain and her efforts to promote women’s equality in the war-torn country.

“I think I was more nervous for her than she was. I definitely was perspiring, and my face was red,” recalled Strathearn, who volunteered to work overseas with the U.S. Defense Department’s Ministry of Defense Advisors program.

“It’s very rewarding,” she continued, “the feeling you get when you see the person that you’ve mentored for eight months finally making it to the table.”

Afghan women are often not allowed to sit at a table with men, let alone during a high-level meeting. They also face many other one-sided social norms in regards to attaining education, driving a vehicle, strict dress codes, and more.

“It’s the right thing to do,” Strathearn, 41, of Dale, N.Y., said about gender equality in Afghanistan. “This mission is essential to keep going. We have a lot of work left to do here.”

Her ongoing commitment was recently recognized with a meritorious service award by National Image Inc., a nonprofit that advances civil rights for all.

Though deeply honored by the award, she still couldn’t travel to New Mexico to accept it in person at the ceremony Saturday. “It would have been a long time away from the mission,” she said.

In the past 18 months, Strathearn has been teaching female government workers the basic budget and finance operations skills and professionalism they need to break through the glass ceiling. She is also doing coordination for a new oversight board that will look into a more inclusive way to promote Afghan general officers.

“We’re trying to stabilize and build a promotion (system) based on merit,” she said.

With her help, the woman who briefed the senior leaders has since earned a service award of her own, along with a promotion. 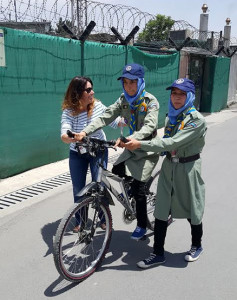 Marci Strathearn, left, teaches an Afghan girl scout how to ride a bike during an outreach event to empower young women. Strathearn, a former Army captain, has been in Afghanistan for the past 18 months trying to improve women’s rights in the male-dominated country as an advisor for the U.S. Defense Department’s Ministry of Defense Advisers program. She recently won a national award for her ongoing commitment to gender equality.

“It’s a humbling experience watching these women persevere,” Strathearn said. “When I finally do return to the States, I’ll be more appreciative for my freedoms.”

Other projects that Strathearn has worked on have sought to empower young girls. It’s all part of fighting for the “small wins,” she said, that can usher in new changes.

In one project, Strathearn and others taught Afghan girl scouts how to ride bikes — an activity normally reserved for boys. At first, she said, it was challenging for the girls, who wore scarves and skirts with pants underneath, but they still had fun.

“They were elated,” she said. “They were free, smiling and laughing.”

Strathearn, who holds a master’s degree in business administration, has herself not been immune to the struggles women face in Afghanistan. Many times, she said, it can take several months to develop a productive relationship with a male counterpart.

“It’s not a naturally trusting environment,” she said. “My experience and advice may not be warranted all the time, but once the relationship is built, it’s definitely needed and solicited.”

Adapting to tough situations is a skill that she has refined during her 14 years with the Army.

“When I was an Army officer, it taught me about conflict issues and how to deal with them,” she said. “It taught me how to be resilient, to be flexible, to lead when I need to be a leader, and to stand up for what’s right.”