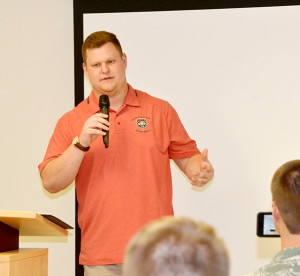 How do you define yourself? Is it as an Airman? A mother or father? A spouse? These are examples of questions Garrett Adcock posed to Airmen on Oct. 20 at Gravity Airman Ministry Center at Kirtland Air Force Base, N.M.

Adcock is the former offensive right tackle for the University of New Mexico Lobos football team and is also known for his humanitarian work. He asked the questions as part of a talk on perseverance and resiliency.

“I want to share my story, to inspire people to place their identity in something eternal over something temporary, as it leads to dissatisfaction in life,” Adcock said.

He grew up in Dallas and attended a Christian academy. Heal so played football.

“Football was everything in Texas,” Adcock said.

He said the movie “Friday Night Lights” was accurate; if anything, it toned down the portrayal of football culture where he grew up.

He now attends the University of New Mexico, where he is a second-year law student.

“When I first came to UNM, I took a biology course. And there is a trend away from creationism and more on evolution. I was excited to hear about it. But the professor would say things during the class such as ‘the creationists really hate this,’ and I would just get mad,” he said.

To alleviate his anger, he took to Twitter. The public backlash would even resort to calling him names.

“I realized I don’t know why I believe what I believe, besides simply what I had been taught,” Adcock said.

He faced an identity challenge after the realization. He took to studying more about his faith.

“It’s a journey I have taken very far; I’m still on the journey,” he said.

Another crisis came when a hospital he had helped fundraise for and equip was taken over by the government in Ghana, Africa.

Adcock and his family would do missionary work in Ghana when he was still in high school. His mom asked one day what more they could do and what the needs of the people were. She received the answer of more health care.

When the hospital was opened, it served more than 3,000 people in two days. Unable to go back for several years due to terror threats and Ebola, Adcock grew worried when the hospital director stopped contacting the missionary group.

Adcock said the director of the hospital had taken out loans against the hospital in the amount of $1 million to try to expand it to serve more people. With the hospital unable to handle the loan and about to be foreclosed on, the Ghana government took over the operations.

It was when Adcock worked at the hospital in the pharmacy that he found a calling for medicine.

Adcock has also had a crisis of faith when he lost a friend, Max.

Max, who was from Las Cruces, was a pediatric cancer patient at UNM hospital. Adcock met him when asked to visit him as a UNM football player for a photo opportunity.

“I was sitting in class one day and got a text from his mom. They were going to be taking Max home,” Adcock said.

At first he didn’t see why that was unusual, but it turned out Max had slipped into a coma. The doctors theorized the cancer had metastasized to his brain.

“I questioned why does God cause suffering; I had no answers,” he said.

It took him the day to rationalize the suffering. What came to him was a passage from the Apostle Paul when Satan had placed a “thorn in his side.” Paul pleaded with God to take it out and God replied, “My grace is enough.”

The only way for Adcock to overcome was to place his identity in Christ.

Adcock was dealt another blow this year in a pair of concussions, once while in training camp and another during a football game.

“My entire life had been about football… I invested my identity in it,” he said.

But all the while he kept hearing a little voice in his head saying, “No, my son, your identity is in me and not in football.”

Adcock said he has learned that things may hurt for a while but it’s all temporary. The only thing permanent is placing your whole identity in the eternal.

Adcock officially retired from football Oct. 19. He will still be involved in coaching and as a mentor to younger players, especially to those who have career-ending injuries.

He plans to finish his law degree and then go to medical school.

Separated but not alone

I’m not just an Airman, I’m a spouse, and I can be both

Separated but not alone