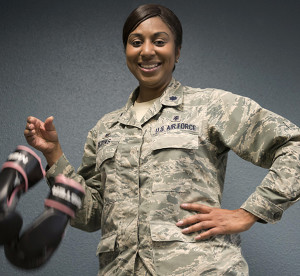 Lt. Col. Felicia Burks, the 92nd Medical Support Squadron commander, drops a pair of boxing gloves Oct. 21, 2016, at Fairchild Air Force Base, Wash. During her fight with cancer, Burks took up boxing as a way of staying physically fit. To her, the dropped gloves signify the end of her fight with cancer.

She placed a pillow under her right shoulder and put her right arm behind her head on the bed. Using her left hand, she pressed the pads of her fingers around her right breast gently in small circular motions, covering the entire breast area and armpit.

These routine checks only took a few moments of her time. But her eyes widened as her fingertips suddenly found a lump on her left breast, and her breath caught in her throat as she realized what it might mean.

“I make it a practice to check myself,” said Lt. Col. Felicia Burks. “I had discovered a lump that felt like a marble in my left breast as I lay in bed one night. The lump … was hard and appeared mobile … It’s unusual when you’re under 40 and don’t have a history of breast cancer.”

It was May 2014, and she was a health services administrator finishing a tour in the 673rd Medical Support Squadron at Joint Base Elmendorf-Richardson, Alaska, only six weeks shy of assuming a command position at Royal Air Force Lakenheath, England.

“I was beyond stoked to have that opportunity,” the medical professional said. “Command is a privilege.”

She went to the hospital and was diagnosed with “triple negative” breast cancer.

Breast cancer is called triple negative when it does not grow in the presence of three known receptors – the estrogen receptor, the progesterone receptor and the HER2, or human epidermal growth factor receptor 2. Approximately 15 to 20 percent of breast cancers are triple negative.

“When breast cancer interrupted my life, all those plans went out the window,” Burks said. “I was devastated. There were times of uncertainty, and I was still determined to go (to Lakenheath) but that just wasn’t the divine plan for me at the time. I started thinking about how to fight through this. I wanted to learn more about what had interrupted my life. I had to go to a medical board, and then go through surgery to remove the cancer.”

With no family in Alaska, she said the prospect of going at it alone was nerve-wrecking.

Burks’ Mother’s Day gift to her mother that year was the disturbing news she (Burks) had breast cancer.

“It shook something in me for a moment, but I realized I had to reach out so she could be a source of strength and support for me,” she said.

Unfortunately, her parents were unable to travel, but her sister was able to be with her for the surgery.

Coming to terms with the disease, Burks said she wondered how it would affect her 23-year-long career.

Growing up in Grady, Alabama, Burks wanted to enlist after being inspired by her uncle’s service in the Army Reserves.

“I was 17 at the time, my mom actually signed the papers for me to join the military,” she said.

The multi-service veteran served in the Army Reserves as an automated logistics specialist from 1993 to 1999 before being commissioned into the active-duty Army, where she spent several years in various roles including an executive officer, administrative officer and a company commander.

But she said she dreamed of a different path, one of putting others before herself by helping people heal as a health services administrator.

“I wanted to be a medical professional, to give back and help make a difference in the lives of others,” the lieutenant colonel said. “It’s amazing; it’s what I was born to do. It’s the best job I could have had, I’m really having the time of my life.”

After years of serving her country, it was her turn to be served.

Surgery to remove the cancer took place only five days after diagnosis. The surgery was followed by six weeks of fertility preservation and then four-and-a-half months of chemotherapy.

The chemotherapy took its toll. Burks was exhausted. She lost most of her eye brows. Her nails became brittle and dark. Her skin appeared dehydrated.

“When faced with anything, we can either fight it, or run from it,” she said.

She shaved her head, rather than watch her hair shed away. Combating the effects of the therapy, she took vitamins and monitored her diet – she was determined to win.

In addition to her sister, Burks also found support through her wingman and church families. 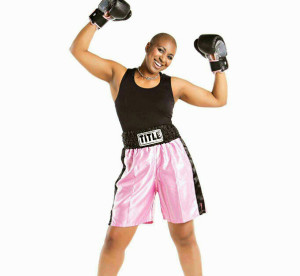 Lt. Col. Felicia Burks shows her resiliency by taking boxing while she battles breast cancer on Joint Base Elmendorf-Richardson, Alaska, in 2014. Burks ultimately defeated cancer and went on to a command position at Fairchild Air Force Base, Wash.

Burks and Maj. Jennifer Pearl, a colleague in the same field, had been friends since 2006 when they met at Health Service Administration School at Sheppard Air Force Base, Texas. They re-connected at Elmendorf in 2012.

“I did what any friend would do – (I was) just a shoulder for her to cry on,” Pearl said, who also served with Burks in the 673rd MSS. “She didn’t have any family there, just a church nearby. She’s one of the strongest people I’ve ever known. If you didn’t know she was going through cancer, you wouldn’t have been able to tell.”

“My period of adversity drew us closer and she taught me wingmanship on the next level,” Burks explained.

The believer also said she found support through a non-military community she held close to her heart. Burks will always consider Shiloh Mission Baptist Church in Anchorage to be her church home. They became her extended family.

“It was shocking and a surprise for her,” said Edwenia Brown, the executive pastor for the church. “We prayed for her in the services, and then we just listened to what she needed. Whatever she needed, (whether) at home or in the hospital, we had a team that would respond, but mostly we were there to listen and walk with her.”

“It was an amazing dynamic, from my Air Force medical service providers, the whole medical team all the way to the providers within the community of Anchorage,” Burks said. “It was outstanding, I was very impressed by the compassion, their professionalism and excellence.”

Burks said the overall process developed her, and made her view life differently.

“I’ll always reference the quote of Winston Churchill, ‘Mountaintops inspire leaders but valleys mature them’ because it reminds me that adversity almost always primes one for purpose,” Burks said.

Burks advises women to pay careful attention to their bodies, to know when something isn’t normal. She also stressed that its important people understand what resources are out there to help.

The Air Force officer and cancer survivor hopes people understand what resources are available. There are services to help patients get a wig or prosthetic, clean their house, or provide meals. There are a lot of options out there to help get through these difficult moments, she said.

“We’re already trained to fight to overcome adversity, especially in the military,” Burks said, sitting in her office at Fairchild AFB, Wash.
As a survivor, she hopes others will not quit, and will continue to believe in themselves and their purpose.

“As I look at myself today, I can clearly see the difference,” Burks explained she finally feels normal again as she adjusted her hair bun, perfecting her professional appearance as she prepared for another day as commander of the 92nd Medical Support Squadron.