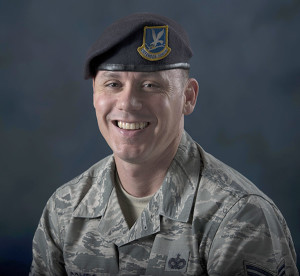 Tech. Sgt. Nathan Combs, the 902nd Security Forces Squadron NCO in charge of resource protection, was diagnosed with testicular cancer in 2005 while serving as a military working dog handler at Joint Base San Antonio Randolph, Texas. Combs was notified in the spring of 2015 that he was considered cancer-free.

At 28 years old, then Staff Sgt. Nathan Combs never imagined he would be in a hospital room at Joint Base San Antonio-Lackland’s Wilford Hall receiving chemotherapy.

But in December 2005, that’s exactly where he found himself.

Sitting across the room from him was a retired Marine, flexing his arm muscles while he read a magazine and received chemo treatment too. The Marine looked over to Combs and smirked.

Now just over a decade later, Combs, now a technical sergeant and the 902nd Security Forces Squadron NCO in charge of resource protection, is cancer free. And he’ll never forget the words that Marine spoke to him.

“People can look at cancer (negatively),” Combs said. “It does a lot of damage in this world; it kills a lot of people, it takes our family members away and the treatment for it is just as bad. Cancer made me reassess everything in my life. And it really changed the path that I decided to take.”

Combs was diagnosed with stage II non-seminoma, which is a cancer that affects the testicle. According to the University of New Mexico’s Comprehensive Cancer Center, this type of cancer is curable in almost 90 percent of cases, but surgery to remove the tumor and chemotherapy are recommended.

Chemotherapy is something Combs remembers all too well.

“I got radiation treatment every day, five days a week, and then on Fridays, I doubled up,” Combs said. “Within a week it took away my appetite. I went from about 190 pounds to about 135 between the surgery and completion of treatment. It definitely kicked my butt.”

Combs’ chemo treatment lasted for about a month, and during that time, he said he couldn’t eat anything with a tomato base. Pasta? Pizza? Forget it.
“I love pasta and pizza, but I couldn’t do it,” he said. “It just wouldn’t agree.”

There was one Mexican restaurant outside the Valley Hi gate at JBSA-Lackland where Combs could always stop to eat. He said his go-to was always a lengua, or cow tongue, burrito.

“I would stop there and scarf down a lengua burrito before or after treatment because if I waited any amount of time, I would not be able to do it,” he said. “A lot of people are like, ‘That’s gross. Lengua, oh my gosh, how do you eat that?’ And I’m like, it’s good. You just eat it.”

Another downside to his chemo was losing his hair, Combs said. He still remembers the moment it first began to fall out about two-and-a-half weeks in to treatment.

At the time, Combs had a motorcycle, and would drive himself to-and-from treatment. He recalls it being a clear, windy day and getting an eyelash caught in his eye.

“I wiped my eye with the back of my hand and half of my eyebrows and all of my eyelashes were on the back of my hand,” Combs said. “I just sat on my motorcycle and buried my head on my arms, and I started crying. It reminded me that it was not going to be an easy kind of fight. It scared me again. It made it very, very real.”

When he was first diagnosed, Combs said he didn’t know how to deal with it. His father had passed away in August 2001 from cancer, so he didn’t want to lean too much on his mother, who had taken care of his dad and worked full-time throughout his treatment. 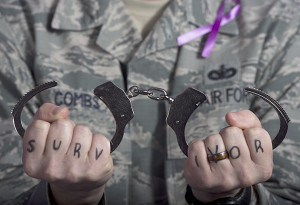 Tech. Sgt. Nathan Combs, the 902nd Security Forces Squadron NCO in charge of resource protection, was diagnosed with testicular cancer at the age of 28. According to the American Cancer Society, about one of every 263 males will develop testicular cancer at some point during their life, with the average age of diagnosis occurring around age 33.

“I would come to the kennels and sit in my dog’s run, which is the kennel area, and he would just lay in my lap,” said Combs, a former military working dog handler. “I attribute a lot of the positive thoughts during that time to my close friends and family. And definitely to that dog.”

After enduring and surviving his own cancer experience, Combs was inspired to help a friend during theirs by donating blood. Since then, and for the last six years, he has become a regular blood donor and attempts to lead blood drives every 90 days.

“After my cancer situation, I started thinking more about people other than myself,” Combs said. “That’s the primary reason why it has become my passion project. I can save up to three people’s lives just from the blood I’m able to donate, so why not?”

Combs believes his experience with cancer changed him for the better and gave him a new perspective. He even credits his fight with the disease as being the most significant experience of his life — aside from the birth of his child.

“It took a very frustrated, angry young man and turned him into a very happy, positive older guy these days at 39,” he said.

Combs advises other men that knowledge is the best weapon against cancer and not to let the “macho” view of something abnormal going on to deter them from seeking help.

“I would rather do without and live longer,” Combs said. “Because there’s a lot of cool stuff to see, and there’s a lot more waves to surf.”
And like the Marine said, it’s all about how you look at it.

Airman seeks to rejoin pararescue team despite loss of leg