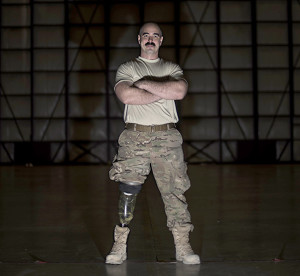 “Being here, you get treated like a normal person, not like an amputee. Not like an injured guy,” said Tech. Sgt. Jason Caswell, as he added more 45-pound plates to his barbell.

In the crowded 455th Expeditionary Aircraft Maintenance Squadron “prison gym” at Bagram Airfield, Caswell is outlifting most. He should be — he showed many of them the ropes.

After a sports injury in 2010, Caswell underwent a year of surgeries, two years of painful limb-recovery therapy, followed by physical therapy. In October 2014, his limb still hadn’t healed and began to worsen. Caswell elected to amputate his injured leg.

It has since been replaced with a prosthetic, which allows him the mobility he needs to get back to work and stay fit.
Though he can now squat 405 pounds, his deployment didn’t start out that way.

“I was a chubby lumpkins,” he said jokingly.

Caswell weighed in at 272 pounds before leaving for his deployment in May 2016. He has dropped down to 226 pounds and has used his success to help others in the unit.

As a group of lifters stands in front of a C-130 Hercules they share their workout area with. They encourage one another to deadlift the weight – 365 pounds.

“I’ve seen Caswell do it and he’s just got one leg. You can do it,” one of them said.

“The guys see it as motivation,” Caswell said. “I’ve been able to come in and show them how to do the lifts, give them tips and help them develop workouts.”

“Jason has lifted not only over 1,000 pounds but the spirits of several across the ‘Vulture Nation,’” said Lt. Col. Richard Boatman, the 455th EAMXS commander. “His drive and character never let anything get in the way of his goals. He is motivated by his loving family and an internal fire to better himself and those around him.”

Eight months and 46 pounds later, Caswell is finishing up his second rotation at Bagram Airfield. Originally tasked with a single four-month deployment, because the person originally tasked suffered an injury, Caswell volunteered to extend for another tour.

“Being here, I’ve missed a lot – Mother’s Day, my wife and kids’ birthdays, my birthday, all the holidays,” Caswell said. “But I wasn’t finished with what I needed to do.”

According to Caswell, what he needed to do was prove that he still belongs in the military. 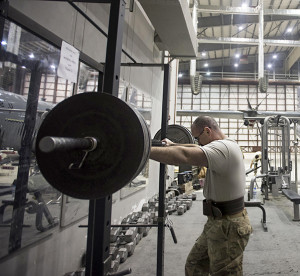 It was a long journey for Caswell to remain on active duty, and another to get medically cleared for a deployment, let alone two.

“I wouldn’t be here if it weren’t for all the chiefs and captains and first sergeants that helped me fight for this,” he said. “Whatever they need me to do in the military, I’m going to do it and nothing is going to stop me.”

Back in the maintenance debrief office where Caswell works, people walk by to say “hey” or stop in to talk, play with Hot Wheels, put together puzzles or other things to pass the time while not on shift.

“While you’re here, this is who you have. This is your family,” Caswell said about the squadron he’s become a part of during his second four-month tour here. “People know they can come here to talk to me, talk about how they’re missing home, missing their family back home. They can come here and we’ll talk about it and we’ll joke and we’ll goof around. If I can put a smile on one person’s face a day, that’s what I’m going to do.”

Caswell and his unit are wrapping up their deployment and preparing to head home to Little Rock Air Force Base, Ark. There, Caswell also serves as an Air Force Wounded Warrior mentor. They have already linked him with two other service members who are also considering an amputation due to injury.

“I’ve deployed, I’ve remained on active duty. I’m a fully active member of the military now. If my story can motivate people or help people, then great,” he said.