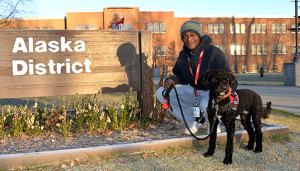 A native of Mountain Pine, Ark., Babb received Matai (mah-TIE’), a Portuguese water dog, at no cost from 832 K9’s Deputy Dogs, a Florida-based nonprofit group. The organization specializes in providing law enforcement agencies across the nation and Europe with trained bloodhounds to assist in searching for missing persons and during other life-saving events.

The black, coiled-haired puppy released a deep bellow while napping under a conference table at the feet of his new owner.

“Oh man, he is feeling it now,” joked Erik Babb, procurement technician with the Army Corps of Engineers – Alaska District’s Contracting Division, while telling the story of how he acquired his new service dog and best friend.

A native of Mountain Pine, Arkansas, Babb received Matai (mah-TIE’), a Portuguese water dog, at no cost from 832 K9’s Deputy Dogs, a Florida-based nonprofit group. The organization specializes in providing law enforcement agencies across the nation and Europe with trained bloodhounds to assist in searching for missing persons and other life-saving events.

However, Matai is as much a bloodhound as his owner is a police officer. The story of their growing bond is one of friendship and empathy in the face of adversity.

“I lost some great friends in-country and at war,” he said. “I want them to be remembered.”

In 2010, Babb medically retired from the Army and began working at the Warrior Transition Unit, or WTU, at Joint Base Elmendorf-Richardson, Alaska. Acknowledging he was broken after settling into civilian life, Babb said, he never took the initiative to seek help during his tenure there — something he attributes to his own stubbornness.

“I knew I had PTSD, and I was not dealing with it,” he explained. “Every person I took care of there made me feel a little bit better, but I was just taking it day-by-day with energy drinks and beer.”

Not long after he joined the WTU, transition units across the nation began shutting down because of budget constraints, including Alaska’s. Soon after, Babb accepted logistics positions with the Air Force and the Corps, while many of his former coworkers shifted to the Department of Veterans Affairs.

Some of his colleagues urged Babb to seek help through the VA. After several appointments, he reluctantly agreed to a 40-day inpatient program in Tacoma, Washington.

The support he received from his new supervisor in the Corps’ Contracting Division meant a lot to him when he chose to seek treatment after being on the job for only two weeks, Babb said. He cherishes the VA doctors and personnel as well.

“The VA in Alaska has never failed me,” Babb said. “Even working with a guy like me — I chewed up their interns.”

However, something still seemed to be missing. Suicidal thoughts and unhealthy habits continued to plague him. Heavy drinking in excess of about 110 bottles of liquor in a matter of months became his new norm, he said.

The medical professionals and his supervisor at the Corps logistics office suggested adopting a service dog. Yet for months his headstrong character prevented him from embracing the idea.

“He was very jumpy and impatient,” said Robin Norby, chief of the district’s USACE Logistic Activity office and Babb’s former supervisor. “I ran across a TV show on someone who raised service dogs and decided to watch to see if it was something that would assist Erik in his dealings with people, crowds and life in general.”

One day, while en route to an appointment, Babb was noticeably depressed. A coworker from the Corps stopped him, hugged him and reminded him that someone always cares. The interaction was a defining moment and helped coax him into adopting a dog, he said.

Pursuing a service dog proved to be no easy task, though. For Babb, the breed was a critical detail. The canine needed to be hypoallergenic because of his wife’s allergies. Previously, Babb had given two pugs away to a local rescue center because of her allergies. Then, he learned about the Portuguese water dog.

In 2009, the breed became famous when President Barack Obama and his family adopted a puppy named Bo. While fit for the commander-in-chief, Babb discovered that one dog cost about $6,000, well out of his price range. He emailed about 30 breeders around the country explaining his struggles with PTSD and his brain injury. The cheapest dog he could find was still $2,500.

Some breeders understood his financial constraints and situation. One organization offered to sell him a dog for $1,000, with the condition that a crowdfunding site sharing his story would be set up, he said. However, the proposition did not align with the Army values he lives and serves under.

“I did not want them using my friends that were killed or hurt for gain,” Babb said. “It would have been disrespectful to them.”

Overall, his search turned up disappointing results. Then one day, Babb’s phone rang, and Duke Snodgrass, executive director and founder of 832 K9’s Deputy Dogs, was on the other end.

Lifesaving canine
Snodgrass’ son, Kody, was a police officer and canine handler with the Lake County Sheriff’s Department in Florida. He wore badge number 832. In 2001, Kody died in a motorcycle accident. During his law enforcement career, he saved two children’s lives with police dogs. Working with dogs was his passion and legacy.

“We started to place bloodhounds in his honor with sheriff departments to keep his badge number alive and keep him going,” Snodgrass said. “We are 210-strong now across the U.S. We bring children home by the dozens.”

According to its website, the organization is dedicated to providing law enforcement agencies with bloodhounds for police work at little or no charge. The dogs are trained to locate missing persons, fleeing suspects and disoriented seniors. The group also works with the FBI and deploys across the country.

In order to help the nonprofit stay viable, Snodgrass raises and sells Portuguese water dogs — a breed he always was intrigued by. But it’s difficult to charge fairly for the time and training invested in each bloodhound, he said.

“We are here to save lives,” Snodgrass said. “That was our commitment when we started this organization. We are not in it for the money.”

After receiving Babb’s email explaining his situation, Snodgrass said he felt compelled to help, but not without getting to know Babb first. During their phone conversations, he found that he quickly related to Babb and what he was going through, he said.

“I could tell that the boy was genuine,” Snodgrass explained. “On some of the work that we did with the bloodhounds looking for missing or abducted children, I had some of those nightmares, not as deep as Erik’s, but I have woken up in the middle of the night seeing stuff that I did not want to remember.”

Since its beginning, 832 K9’s Deputy Dogs has placed 80 out of the 210 bloodhounds with law enforcement agencies at no cost. Snodgrass said he could afford to donate a water dog to Babb.

A few weeks later, Babb flew to Tampa to meet Snodgrass and Matai. Not sure what to expect, he knew he was about to receive a tremendous donation on the generosity of complete strangers.

Babb presented Snodgrass with a certificate of appreciation from Col. Michael Brooks, Alaska District commander. Meanwhile, Babb’s chain-of-command thanked him for his generosity and good deed via email. Babb decided to spread word of the good deed.

“I did not want to go empty handed,” Babb said. “I had to do something to make it right. I sent an email to multiple media outlets in Alaska and Florida.”

A local Tampa TV news station picked up the story and captured the first meeting between the three in the hotel lobby where Babb was staying. The energetic puppy jumped on Babb, and he knew he found a new best friend.

“I felt like it was Christmas,” Babb said of the experience. “I really like this dog. He is a part of my family now.”

Snodgrass and Babb eventually parted ways and the story aired that night. The next morning, Babb found himself at the center of applause when he and Matai went for breakfast in the hotel lobby. Management even comped his stay for sharing his story at the hotel.

Babb said the experience had taught him a valuable lesson about compassion for others.

“One thing Duke wanted me to do was pay it forward in life,” he said. “To take any opportunity to stop and listen to a young man or woman in need.”

Snodgrass and his family plan to visit Babb and Matai this spring. For now, Babb will have his hands full training the pooch to meet his needs.

Matai
During the first night they spent together, Babb had a nightmare. A gentle nudging from Matai woke him up. The incident served as confirmation that a solid connection was forming, he said.

“These dogs really work,” Babb said. “The bond is good. Nobody is going to hurt this dog.”

“I wanted to name him ‘chief,’ but I did not want to be in the building confusing my supervisors,” he joked. “He is the little chief of the district.”

Matai’s mission is to complete about 160 hours of basic and specialized training to be certified as a legal service dog. He will learn to wake Babb from nightmares; recognize symptoms of anxiety and tension; remind him to be calm by tapping his foot or rubbing against his leg; help keep a personal safe zone and retrieve medicine.

In the meantime, he remains at his new owner’s side, offering comfort and emotional support.

“When I go fishing, he will be there with me,” Babb said. “I have a friend with me at all times.”

Snodgrass said he hopes Babb’s story will inspire other breeders around the nation to step in and help someone else in need.

“I hope there are other breeders out there that want to make a difference,” he said. “I hope that need gets met whether it is one, two or 200. I think we owe it to [our veterans].”

Despite Babb’s tribulations in life, he knows there are many others who could use a service dog and friend like Matai.

“I almost cried,” Babb said. “What did I really do to deserve it? There are other people who have worse luck.”