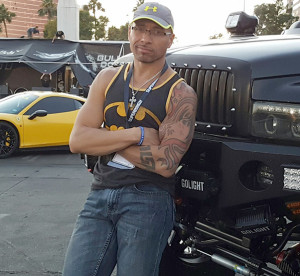 Jason Velez poses next to his custom built Dodge Ram 2500. Velez, a retired Airman, who served multiple tours in Iraq, rebuilt the truck to resemble a vehicle halfway between a personal vehicle and tactical military vehicle. Velez hopes the hybrid vehicle will help other veterans transition from military to civilian life.

After four years and countless hours working on restoring and retrofitting his truck to help veterans with PTSD, Jason Velez of Roy, Utah, was invited to be a feature vehicle exhibitor and contestant in the Battle of the Builder at the 2016 Specialty Equipment Market Association Show in Las Vegas last month, the foremost automotive specialty products trade event worldwide.

Receiving an invitation to SEMA is a rare honor Velez said, especially given he built the truck on his own from his driveway, without the luxury of a large team of builders, which is usually the case for any vehicle presented at SEMA.

Velez said the journey getting to SEMA, however, has been a life changing event, helping him heal from PTSD after a 21-year military career and the death of a young security forces lieutenant Velez worked with during his final tour.

“These past couple of months have been a fantasy and a pipe dream, but it is the most beautiful closure to some of the ugliest chapters in my life,” Velez said. “Sadly, I have learned there is a horrible stigma to PTSD, but being able to do this for others has been an avenue of recovery for me.”

Following his return home, Velez was counseled to begin a project to help him cope with the impact of numerous combat tours, so he set about restoring his truck. “What started as a self-therapy tool became a crusade for me to develop improvements to the tactical vehicle designs of my old fleet,” Velez said.

“I tried to engineer countermeasures to the explosive formed penetrator weapon that took my friend’s life and my mission grew rapidly,” Velez said. “When random strangers would just show up in my driveway and start conversing out of curiosity, they ended up sharing their feelings and emotions with me, and it hit me. I finally had a focal point to concentrate my efforts on and I felt a sense of hope.”

Seeing the impact of his efforts on others fueled his desire to do more, and eventually decided he could create a new therapy technique to help others through. “I set out to target a greater audience, which gave 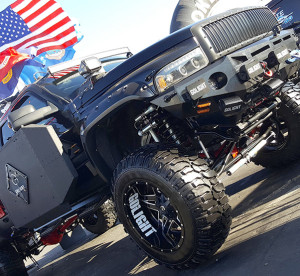 He started getting sponsorships and was invited to SEMA with Golight Company as his sponsor, which meant he only had a few months to get his truck ready for the show. Velez began working harder than he had since being home from Iraq, working late into the night of his work week and 16 to 18-hour work days on the weekend trying to get his truck finished in time.

Velez didn’t get everything completed that he had hoped, but his truck was ready to go just a few hours before he needed to leave for Las Vegas. He was nervous about entering the builder’s competition. “I’ve never heard of or seen someone build a vehicle in their driveway that competed at that level,” Velez said. “I thought I would be laughed at going up against big timers in the auto fabrication and build industry, but then I wanted to find out where a driveway build by one guy stacked up against the toughest competition in the world.”

Velez didn’t place, but just being in the competition was an honor he said. “I will continue to help and hopefully inspire more and more sufferers of PTSD with the story of this project. Team Golight gambled on an emotionally broken veteran and gave me a chance,” said Velez. “They restored my hope and helped heal my heart and now I will never be too shy about sharing my story to anyone who wants to hear it.”