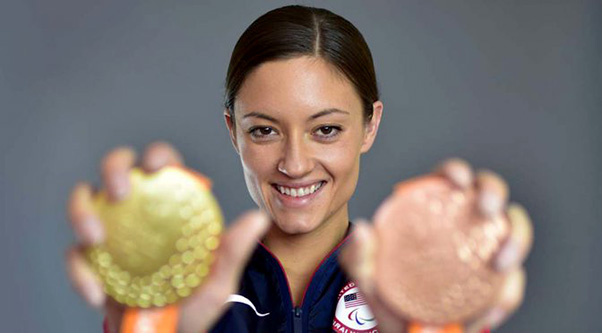 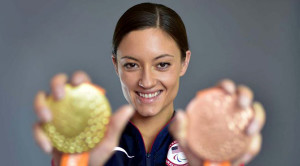 It’s been a momentous year for Sgt. Elizabeth Marks.

The combat medic and U.S. Army World Class Athlete Program swimmer spent the summer garnering international headlines for a grand gesture while winning four gold medals in swimming at the Invictus Games. That led to an appearance at the ESPYs, the awards show that recognizes sports’ highest achievements, to receive the Pat Tillman Award for Service. She followed that up by smashing a world record and winning two medals during her first trip to the Paralympic Games in Rio de Janeiro, Brazil.

The list of hardware is already impressive. But it received another addition earlier this week.

Marks was named to the ESPN Women’s Impact25 Athletes and Influencers list Tuesday. The list highlights the top 25 women who made the greatest impact in sports and the societies in which they live. Marks joined names such as Simone Biles, the Olympic gymnastics gold medalist who was also the magazine’s Woman of the Year; Kathryn Smith, the National Football League’s first female full-time coach; and Hillary Clinton, the Democratic presidential nominee.

It’s extremely special to even be mentioned,” Marks said on Twitter about being an Impact25 nominee.

Her unveiling as an honoree was marked by an essay written by Prince Harry. The British royal was at the center of the moment that opened the world’s eyes to Marks.

In May, she made international headlines for her gesture at the Invictus Games in Orlando, Fla.

Marks was decorated with her fourth gold medal at the Games by Prince Harry, who created the competition, an international Paralympic-style, multi-sport event, which allows wounded, injured or sick armed services personnel and veterans to compete. After he placed the medal around Marks’ neck, the 26-year-old gave the award back.

Marks wanted Prince Harry to deliver the medal to Papworth Hospital in Cambridge, England, where she spent the duration of the inaugural Invictus Games in 2014. Marks traveled to London in the fall of that year to compete in the Games when she collapsed with respiratory distress syndrome. Her condition worsened and she was eventually hospitalized and placed on extracorporeal membrane oxygenation, or ECMO, life support to help her breathe. She missed the Games, but Marks said she was fortunate to come back alive. She said donating one of her medals was the only way she could think of to repay the hospital staff. Her request was honored June 1.

“This is an incredible achievement by any standards,” Prince Harry wrote about Marks’ appearance in the Impact25 list. “And I know this is how she wants to be defined, by her achievements and her abilities. But as an Army sergeant wounded in service to her country, her journey to get to this point has been remarkable. To me, she epitomizes the courage, resilience and determination of our servicemen and women. Using sport to fight back from injury in the most remarkable way, she sums up what the Invictus Games spirit is all about.”

For Marks, her ordeal in 2014 wasn’t the first time she had to endure an arduous hospital stay. In 2010, after suffering devastating injuries in Iraq, she grew nervous about the words being bandied about her such as “end of service” or “retirement.” Marks called her father to vent her frustrations. The former Marine told his daughter to write what was most important to her on a piece of paper. She scrawled “FFD” in pencil on a torn sheet of paper. The acronym stood for “fit for duty.” She was deemed fit for duty on July 3, 2012, after several painful surgeries and a grueling rehabilitation. Marks has not stopped trying to live up to the notion, resuming her job as a medic while also competing for WCAP.

“I was told it’d be six months before I got into a pool again,” Marks told the audience at the ESPYs where she became the first active-duty Soldier to receive the Pat Tillman Award. “I got into a pool about a month out of my coma. Without those physicians, without their service, I would’ve died. I hope that my service could eventually mean that to someone.”

Marks received a standing ovation after accepting the award on the stage of the Microsoft Theater in Los Angeles. She thanked her father and the Pat Tillman Foundation for turning an “absolute tragedy into a triumph.” She also thanked her fellow injured service members throughout the world for their support. She said any success she found at the Rio Paralympics would be because of them.

And find success she did. Marks broke her own world record in the breaststroke to win the gold medal. She then had a heroic swim in her leg of the 4×100 medley relay to help the Americans win a bronze medal after getting off to a difficult start.

The feat seemed to cap off a storied sports year for Marks. But this week proved otherwise. And that should suit her desire to inspire her fellow Soldiers just fine.