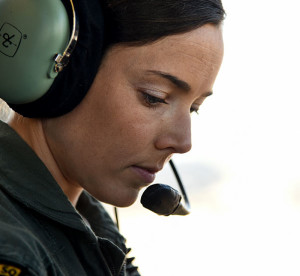 With childlike wonder she watched as her mother pulled on a pair of combat boots. She witnessed her mother forge forward, knocking down walls that once stood to stall female progression. In the wake of that advancement, there was a maneuverable route the young girl could use to reach her own future goals.

Capt. Jamie LaRivee, a 21st Airlift Squadron C-17 Globemaster III pilot at Travis Air Force Base, Calif., saw her mother as a role model, and watched her excel in an Air Force career, making LaRivee certain she would follow in her mother’s boot steps.

“She was in the first class of women at the Air Force Academy,” said LaRivee. “That was a big piece of her life that shaped her completely, but it was also a big piece of my life too.”

After LaRivee graduated high school, she mirrored her mother and attended the Air Force Academy where she majored in operations research and minored in German.

Her mother was a rarity as a female cadet in 1976. Similarly, today LaRivee’s career field is manned with just over 5 percent women.

While at the academy, she had an opportunity to fly gliders. She recalled how she felt in control of her own exhilarating roller coaster ride. After that, she was committed to make it as an aviator.

“There are still biases out there, and sometimes there are people who make assumptions,” LaRivee said. “They’re not so sure you can be as qualified as a male pilot, but that just makes you want to work even harder to show you’re just as capable.”

“In aviation, it doesn’t matter if you’re male or female- you’re a flyer,” said Barbara Brewer, the 21st AS unit program coordinator. “Your gender doesn’t change that ability.”

The world of 2017 has progressed socially far beyond the views of 1976.

“My mother faced a lot more challenges and a lot more barriers,” LaRivee said. “There were not as many women who had gone before her to pave the way to prove that women were just as capable as men if they worked hard at it.”

LaRivee views her gender as a proud part of her identity. She is aware of the obstacles that being a female military member presents, and accepts them as an opportunity to excel beyond expectations.

“You can’t pretend that we are built the exact same way as men. But, there are so many ways that we can, if not overcome it, become better,” LaRivee said.

Trials arise throughout a military career that tests a person’s confidence in their own ability. While flying a mission, LaRivee was part of a predominately female crew. She remembers a passenger looked inside the flight deck and was shocked that he had been unable to tell the difference in women flying the aircraft rather than men. This comment did not bring LaRivee to question her capacity as a woman, but rather solidified her confidence in her skill.

“If you face challenges, don’t let them get you down, let them inspire you to do better,” LaRivee said. “There are so many women in aviation who have done amazing things, and there have always been people who doubted them.”

In a 1996 speech made by LaRivee’s mother, the message of femininity in the military rang out.

“One of the biggest challenges of being a woman in the military has and will continue to be balancing strength with sensitivity, confidence with humility,” said retired Lt. Col. Marianne LaRivee, in a speech for the Senior Executives Symposium Spouses Program. “We want to show that we can do our jobs well while also staying true to ourselves as women–daughters, sisters and mothers. That we can do what our country asks of us while also living up to the cultural expectations and responsibilities of our gender.”

The Air Force perseveres in its commitment for a brighter, more diverse future.

“We’ve made a lot of progress in the last 40 years,” said LaRivee. “The social norms have improved so much in our favor as women in the military.”