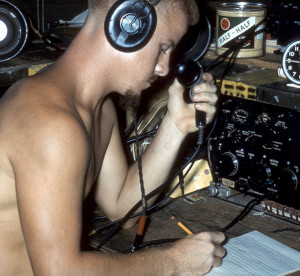 For six months in 1956 Bob Cunningham, a former Air Force radar operator, lived on a remote knob approximately 2,000 feet long and 850 feet wide in the Spratly Islands group located midway between the Philippine Islands and Vietnam. His home was a canvas tent and he manned radio and radar equipment for a secret Air Force project mapping the earth.

Cunningham’s first duty station was a tiny, oblong blister of land in the South China Sea. He knows it as North Danger Island.

It was a ‘million dollar experience’ that he wouldn’t give two cents to repeat, Cunningham said jokingly.

Cunningham’s four-man team and all their equipment was brought in by helicopter to the island from the deck of a Landing Ship Tank, along with the drinking water, fuel and rations the men would need to survive. Resupply occurred every four to six weeks by helicopter, supplemented by occasional parachute drops. A radio relay team of six Airmen had already established itself on the island and shared the same copse of trees.

“I was 22 years old. I was the kid on the island so it was a real experience,” Cunningham said. “I didn’t have a lot of sophistication psychologically, and that was a real psychological test for human beings, to be going like that.”

He was an Airman 2nd Class, with just over a year of service in the Air Force and some college education. His sergeants had seen combat during World War II and were wise to what the isolated team would endure. Their ingenuity, humor and direct leadership kept young Cunningham and the others on the island from mentally cracking.

To keep a low profile, the Airmen were ordered to stow their uniforms and wear civilian shorts and sneakers, sandals and cowboy hats instead. The men also kept their pistols and M-1 Garand rifles ready, knowing that pirates and other possible threats roamed the waters surrounding them.

“The Chinese nationalists came by with a gun boat. A big, long vessel,” Cunningham said. “And they had this big 3-inch cannon on the front on a turret, and they swung that baby in toward our island, and they had some machine gun turrets, and pretty soon we saw boats come over the edge and some officers got on that and they came in to see who we were and what we were doing.”

The Airmen placed palm fronds along the beach to spell out U-S-A-F. The gunboat crew was satisfied and the standoff ended.

On another occasion, Okinawan fishermen came ashore to trade their fish for drinking water.

“They saw our 50-foot antenna that we put up for our radar set, our pulse radio, and so they were curious,” Cunningham said. “They came onboard and they were quite friendly.” 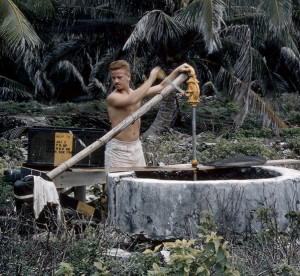 Airman 2nd Class Bob ‘Red’ Cunningham, of the 1374th Mapping and Charting Squadron, pumps water from an old well on North Danger Island in 1956. The Airmen only used this for laundry and washing. Drinking water was delivered in 55-gallon barrels.

But visitors were the exception. Day after day, interaction was limited to within the tiny community of Airmen.

The veteran sergeants kept up morale in other ways. They improved the camp with funny signs, handmade furniture and a wind-driven water pump. They cooked sea turtles for the men, and they improvised a way to make alcohol from coconut juice and cake mix.

For recreation, Cunningham would walk around the island and photograph the thousands of birds it attracted. He also tried diving off the reef once and became terrified by the absolute darkness.

“I opened up my eyes and it scared the bejeepers out of me,” he said. “It was total black. I couldn’t see anything. I got so danged scared, I came up and I got off and I got back to that reef and I never went back again.”

In the final month, he and the sergeant were the only humans left on the island. Two members of his team were evacuated. The radio relay team was relocated, taking their noisy generator with them. For the two men remaining, the silence at night was now ‘spooky’ – a lone coconut dropping from a tree was enough to send them scrambling for their weapons.

Cunningham said his experience on the reef forever changed how he relates to other people.

“I have an expression,” he said. “’This guy sounds like a North Danger kind of guy,’ meaning somebody compatible, smart, you can get along with him, he’s got a good temper. Or this guy, I would not want to be with him on North Danger.”

A kidney for Kai