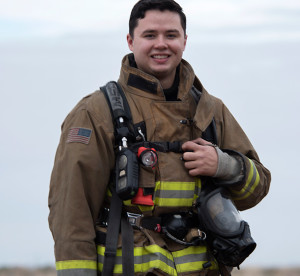 The holidays are a great time to reset with family, and Cloudcroft, N.M., a small village nestled in the Sacramento Mountains, 30 miles east of base, is a convenient getaway for Holloman Airmen.

The scenic, green pines and cool weather lure in visitors who are looking to escape the muted colors of the desert.

On Nov. 24, 2018, Staff Sgt. Brock Gladson, 49th Civil Engineer Squadron lead firefighter, traveled to Cloudcroft to take in the scenic views and stroll the boardwalk of the Burro Street Exchange with his family; he never anticipated saving a man’s life.

“I was buckling my son into his car seat when I heard a distressed woman’s voice screaming for help,” said Gladson.

When Gladson turned around, he saw an older man was being laid on the ground outside of a parked vehicle.

“I didn’t need to stop and think about anything,” said Gladson. “It felt very natural, almost like my body was pulling me toward him.”
The man was suffering from cardiac arrest.

Gladson administered five sets of CPR before the ambulance arrived, continuing CPR until the paramedics were ready to drive away.

“The Air Force has provided me with the skills and training to be able to save a life,” said Gladson. “This is actually the second time I saved a life. A few years ago, I responded to another case of cardiac arrest, but I was on-duty and had a lot more to my advantage.”

While Gladson may have been off-duty this time, his confidence and abilities have grown since his previous save; he is currently a certified CPR instructor and has taught hundreds of Airmen how to perform CPR. 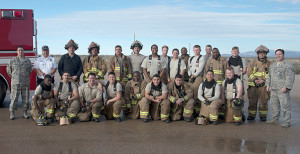 Firefighters from the 49th Civil Engineer Squadron pose for a group photo after completing a live burn exercise Dec. 3, 2018, on Holloman Air Force Base, N.M. Holloman has three fire stations with more than 80 personnel.

Gladson is originally from Casper, Wyoming, and enlisted in the Air Force as a firefighter in 2013. Today, he is the lead firefighter at Fire Station 3 on Holloman Air Force Base.

“Having the schedule that we (firefighters) do, 24-hours on and 24-hours off, we miss quite a few events and important times in our families’ lives,” said Gladson. “The fire department really tries their best to accommodate us (firefighters), but I need to be more present for my own family.”

Coming to the end of his service in less than a year, Gladson plans to become a real-estate agent and spend more quality time with his wife and three children.

“I’m so grateful for my Air Force career as a firefighter,” said Gladson. “I have matured so much over the years, and the training I have received has really made an impact on my life and the lives of others.”