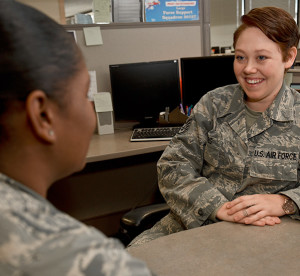 Air Force Staff Sgt. Jacquelyn Combs, 21st Force Support Squadron noncommissioned officer-in-charge of customer support at the Peterson Air Force Base, Colo., military personnel section, jokes with a coworker, Nov. 14, 2016. Combs was diagnosed with Crohn’s disease while at her first assignment and diagnosed with cancer at her second assignment, but didn’t let either affliction stop her from doing her best.

Over nearly a decade of Air Force service, Staff Sgt. Jacquelyn Combs, 21st Force Support Squadron noncommissioned officer-in-charge of customer support at the military personnel section at Peterson Air Force Base, Colo., has had more than her share of adversity to battle, but she comes back stronger every time she gets knocked down.

At age 21 while stationed at MacDill Air Force Base, Fla., Combs was diagnosed with Crohn’s disease. She said it was an unexpected, painful experience.

“I thought that my appendix had burst, so I drove myself to the hospital and thought I was going to get into a car wreck,” she said. “I had to stop and squeeze the steering wheel so I wouldn’t drive off the side of the road.”

The pain feels like being in labor and doesn’t really go away, Combs said. The disease is becoming more prevalent and can be regulated with medication, but there’s also a specific diet tailored to the individual. Combs said her body doesn’t function well on healthy food and does better with less healthy options.

“So pizza is really my best friend,” she said. “If I were to eat apples, the acidity and what it does to my body, as opposed to someone else’s body, is very different.”

Under control during deployment
Not long after being diagnosed, Combs deployed to a two-person military personnel flight. The combination of medication and learning to control her diet allowed her to get her Crohn’s disease under control, she said, noting that it’s important to know which food items cause flare-ups and which ones help. For example, Combs explained, whenever she has a flare-up, the first food she goes to is potatoes, because they help her body regain its balance.

“It can be a difficult thing to live with,” she said. “It’s a chronic illness for a reason. I may have a smile on my face, but the majority of the time, my body is in pain.”

After becoming more comfortable with how her body reacted to the disease, Combs and her family moved here in 2014. She started rapidly losing a lot of weight, and she noticed that her hair falling out. Soon, she said, every time she leaned over at work, it caused pain and she felt a poking sensation under her ribcage. At first, she added, the just thought it was stress.

“I would joke about it, because I thought it was a baby arm,” Combs said. “It felt like a baby arm when you’re pregnant. It wasn’t. It was tumors.”

She got increasingly more exhausted, she said, and eventually stopped eating because it caused extreme pain. She discussed her symptoms with her father and was convinced to see a doctor. She said everything progressed quickly after an X-ray revealed a mass and a biopsy revealed what the doctors called desmoid fibromatosis tumors.

Four tumors about the size of softballs jumped sporadically throughout Combs’s body, causing her organs and body to begin shutting down. Because that specific type of tumor affects only four out of every 1 million people, Combs became a study case.

Doctors in Denver conducted tests and research, because the condition is so uncommon. When it came time to remove the tumors, Combs said, the doctor had previously operated on only one other person with the same condition.

“I was actually really excited about going into surgery, because then all my pain would stop once they removed the tumors,” Combs said.

With everything going on, she added, she remained positive and made jokes about her condition. At the time, Combs had two children and said the thought of not being there for them was scary. But being negative, she said, “only makes it worse quicker.”

Of the four tumors she had, only two were removed.

Unexpected development
After the surgery, Combs said, she expected to be treated with chemotherapy and radiation. But something changed. Two weeks later, she went in for an appointment and doctors told her she was pregnant, which meant her treatment wasn’t an option. What Combs called a miracle turned out to mean treatment wouldn’t be necessary.

“Once I got pregnant, all my symptoms stopped,” she said. “All my organs were shutting down, my hair was falling out, but once I got pregnant with [my daughter], everything stopped. …It was my miracle child.”

Symptoms of cancer went away, and Combs began to feel better. She began going to prenatal appointments while she still had a drainage tube and a bag sticking out of her side from the surgery. Her baby was born in November 2015, and life today couldn’t be better for the happy family of five.

Family and leadership both helped her battle through the cards life dealt to her, Combs said, adding that her job is not only to be an airman, but also to be the best mother and wife she can be. At her lowest lows, she said, everyone helped her focus on the next step and keep her eye on the goal.

Today, Combs said, she has some “pretty awesome scars” and follows up with her doctors every six months to keep an eye on the two tumors that weren’t removed.

“When I say I have Crohn’s disease or I had this soft-tissue cancer, people look at [me] differently,” she said. “It’s not that I’m sick. It’s just that my body is different, so I have things that I have to do to take care of it. But that doesn’t mean I can’t do my job.”

Anyone going through a stressful situation should focus on something they wholeheartedly believe in to make the challenge easier, she added.

Airman seeks to rejoin pararescue team despite loss of leg