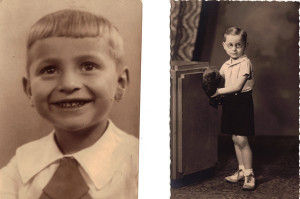 Samuel Lauber, a retiree from the 88th Air Base Wing Medical Group, survived the Holocaust after being rescued as a toddler by the Detry family in Lalouviere, Belgium. These pictures were taken around the time Lauber went into hiding from the Nazis during World War II.

The year is 1942 and the Nazis are in the second year of their brutal occupation of Belgium — as they seek control of Europe and the world.

Sam Lauber, a retiree from the 88th Air Base Wing Medical Group at Wright-Patterson Air Force Base, Ohio, was born to a Jewish family in Antwerp Belgium, March 29, 1942, on the first day of Passover (the Jewish holiday commemorating liberation of the Israelites from slavery in ancient Egypt) during what was a dangerous time for Jewish people in Europe. Across the continent, Nazis and their sympathizers were passing laws stripping Jews of property, economic opportunity and systemically targeting them for elimination in their communities and in death camps.

Lauber’s family who were living in Brussels, knew they could be arrested by the Nazis at any time and in order to save his life they approached the Mother Superior of a local Catholic convent, who agreed to hide his identity and arranged for him to be sent to a sea resort for kids with breathing problems. Eventually it was discovered that he was in fact healthy and preparations were made to send him back to Brussels in which he would have risked being identified, arrested and deported to a concentration camp.

Nelly Detry, a pediatric nurse who found out about Lauber’s situation from the group taking care of him, knew the danger to his life so she asked her parents in Lalouviere Belgium to keep him — and protect his identity — for the duration of the war. They agreed and became his foster parents.

During this time Lauber became very close to the Detry family, who at great risk to themselves took him in. A key part to keeping the family safe was ensuring that little Sam blended in.

“If the family went to church, I went to church,” Lauber said. “If they ate non-kosher food, I ate non-kosher food, although my parents [biological] kept kosher. But I had to do what they did. Also, if someone in the community asked who I was, they [Detry’s] would say that I was a member of the family visiting for a period of time. They had to keep who I was a secret.”

While with the Detry’s, one issue that came up was whether to baptize Lauber.

The family reached out to Lauber’s parents, who said no.

“There were many instances where foster parents [people who hid Jewish children] did have their Jewish child baptized, which was a big issue because at the end of the war the foster parents would say to the natural parents, no the child converted to Catholicism, the child stays with us,” Lauber said.

Towards the end of the war, Lauber’s biological sister picked him up and returned him to his parents. The parents never discussed how they managed to survive the war.

On April 12, 1948 Lauber and his family boarded the Queen Elizabeth I for the week-long passage to the United States.

“My father would take me on tours of the ship, and to the make-shift synagogue,” Lauber said. “Once we saw the Statue of Liberty, everyone cheered. Freedom at last. Now we could start living.”

Years later while working in Europe as a civil servant, Lauber was able to find and meet the family who hid him as a child and saved his life, which he described as a joyful occasion and something very special.

“I never spoke about my background (as a hidden child) until 1991,” Lauber said. “By education and speaking about what happened, we can make people aware and prevent another Holocaust.”

Lauber retired from Wright-Patt in 2008 as an outreach program manager with the Medical Group, where he was responsible for providing suicide prevention training across the base, training approximately 88,000 people during a ten-year span.