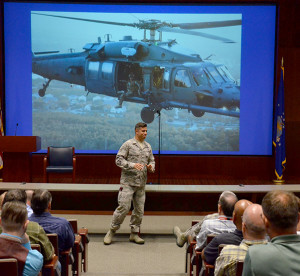 Staff Sgt. August O’Niell, an Air Force pararescueman, briefs members of the Air Force Technical Applications Center about how he sustained significant warzone injury, which led to the amputation of his leg, and how he overcame adversity during AFTAC’s Combat Airman Fitness Day May 22, 2017. O’Niell is the first Air Force pararescue amputee on active duty today.

Those were the words of Staff Sgt. August O’Niell, an Air Force pararescueman, to members of the Air Force Technical Applications Center when the combat warrior visited the base to discuss resiliency during the center’s Combat Airman Fitness Day.

AFTAC commander Col. Steven M. Gorski invited the Purple Heart recipient to speak after learning of a connection between O’Niell and another member of the treaty monitoring center, Kevin Callan. Callan has known Auggy (as he’s fondly known by his inner circle) since 2001, and thought he’d be a perfect candidate to inspire AFTAC personnel during their quarterly CAF Day events. Once Gorski learned of O’Niell’s amazing story of courage, he told Callan to do what he could to have him come speak.

In July 2011, O’Niell was on a rescue mission in Afghanistan when his helicopter came under fire from enemy insurgents. Several rounds pierced the chopper, with one tearing through O’Niell’s lower limbs. His left leg was severely wounded, and after nearly two dozen surgeries, immeasurable pain and a desire to stay on active duty, he opted to have his left leg amputated above the knee.

“The non-stop, excruciating pain was just too unbearable,” he told the standing room only crowd. “After talking with the doctors and surgeons and various specialists, I made the decision to have the leg amputated. Once that decision was made, there was no looking back. And to this day I don’t have any regrets about it.”

The PJ’s message resounded with the packed house in AFTAC’s Northrup Auditorium May 22, 2017. He went into detail about that fateful July day that changed his life forever, and talked about how he’s learned to deal with what he calls the “new normal.”

“When I look back at everything I’ve gone through, believe it or not I’d have to say my darkest day was when my ex-wife asked for a divorce,” he said. “It was on a Sunday. I know that because two days before, I called my case manager and told her that I had hit rock-bottom and needed some help. Her response was she’d get me seen by a mental health specialist first thing Monday morning. I was already in a very bad place – physically, mentally, emotionally – and then my wife sprung that news on me. I don’t think I ever felt more alone than I did at that moment.” 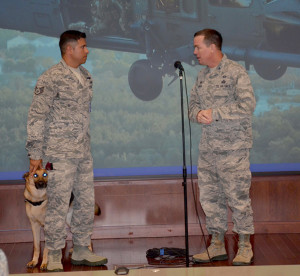 He continued, “I’ve never been suicidal, but I remember going out on a motorcycle ride and I thought to myself, ‘Man, if I take this turn too hard or I wipe out or something, that might not be a bad thing.’ But then Kai (his service dog) came into my mind and I realized he might be left alone for days before someone found me or realized I was gone. I just couldn’t do that to him.”

Kai has been a part of O’Niell’s life since shortly after his accident.

“I told my case manager I was lonely and needed a companion to help me cope with everything,” he said. “She said it could take up to two years for me to get a service dog, and I told her, ‘Two years? But I’m depressed today!’ That’s when I reached out to K9 Soldiers for help.”

K9 Soldiers is a non-profit charity dedicated to improving the lives of military servicemen and women by providing them with fully-trained dogs to assist with everyday challenges.

Kai was at O’Niell’s side throughout his visit to AFTAC – a first for the center. The audience laughed when Auggy warned them about how Kai reacts to applause.

“I just want to let you know he has his own way of clapping along when he hears others doing it!” And O’Niell wasn’t joking – when the crowd erupted in applause after his presentation, Kai popped up on all fours and began to howl and bark.

“That was pretty cool to witness,” said Master Sgt. Tamicka Cogdell, AFTAC’s superintendent of program management. “As much as I loved seeing Kai at his side, listening to his story was so compelling, humbling and heartfelt. Sergeant O’Niell is a hero in my eyes, and it was an honor to listen to what he’s been through, and what he’s overcome. He was truly inspiring!”

After nearly two dozen surgeries, countless hours of rehab, and a drive to return to active duty to rejoin his PJ brethren, O’Niell began the process to requalify and recertify as a pararescueman. His decision to amputate his leg not only helped alleviate his pain, but cleared the way for him to meet a medical board for consideration to return to the job he loves. 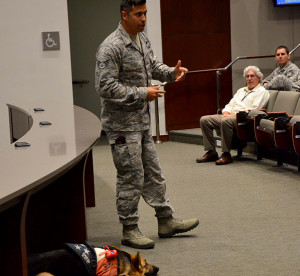 “I am a very competitive person,” he said. “I love to win – so much so that if you beat me once, I won’t let you beat me again.”

His competitive spirit was evident during his participation at the Invictus Games in 2016. He rappelled from a helicopter during the games’ opening ceremonies in front of 10,000 spectators and television viewers around the world, with Kai anxiously waiting for him at the center of Champion Stadium in Orlando, Fla. He competed in swimming, and earned a Gold Medal in sitting volleyball. He’s also a five-time Warrior Games gold medalist.

“Sergeant O’Niell’s description of ‘little victories every day’ really resonated with me,” said Gorski. “He talked about how he wakes up each day and sets a small goal for himself, whatever it may be. He tells himself that he just needs to accomplish that one small thing, and when he does, he counts it as a success. This is an Airman who loves his job so much, loves the Air Force so much, and loves being a part of our nation’s fighting force. I hope the AFTAC workforce walked away with a greater sense of understanding of what Auggy went through, and how he’s risen above an enormous amount of adversity to continue to serve his nation. I challenge everyone here to keep his story in mind when they’re facing hurdles that seem tough to overcome.”

During his presentation, O’Niell quoted the pararescue motto during his presentation, ‘These things I do, so others may live.’ Gorski agreed there is no greater sacrifice than someone willing to lay down his life to protect others. “He is a testament to every aspect of the Air Force Core Values, and it was a privilege to have him visit the center,” he said.

O’Niell is the only pararescue amputee serving on active duty in the Air Force.