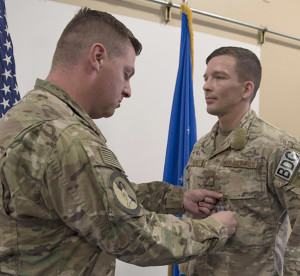 He was rushing to work when cars suddenly started braking and driving around a car in the middle of the street. On the side of the road he saw an overturned van with the driver still inside.

Relying on his military training and previous experiences, Staff Sgt. David Green, 824th Base Defense Squadron fire team leader at Moody Air Force Base, Ga., leaped out to help the trapped victim, unaware that he would soon become that man’s hero. To him, he was simply doing what any good person would do.

Green received an achievement medal, April 10, 2017, at Moody for his courageous acts during an off-base vehicle incident.
“He told me something that will always stick with me,” said Green. “He said that when he saw me in my uniform that day, he instantly knew that he was going to be alright.”

Green added that the only reward he needed was knowing that the victim was going to be okay because he stopped to help.

“You never know when you could be the one that needs help so it’s important to stop and help when someone is in need,” said Green. “It’s essential for (service members) to step up like this because it gives the community faith and trust in the military and lets them know that the training we do each day really works.”

As Green approached the overturned van, he immediately recognized signs of shock in the victim, noting that he was disoriented. He noticed smoke coming from the engine and instructed the victim to turn off his vehicle. Green looked for a way to get him out but realized that every entry was blocked.

“I worked with the 23rd Security Forces Squadron as a patrolman for eight years. So during the moment, it felt like I was back at work,” said Green. “However, because I didn’t have my law enforcement gear on, I didn’t have any of the tools that I had been trained to use.”

Forced to improvise, Green found a drill that had fallen out of the victim’s van and used it to break the windshield until he could pull the glass back enough for the victim to get out. Once the victim was out, Green began to treat for shock, a skill he learned in self aid buddy care training.

“Because of the military training I’ve been given and the previous experience I’ve had with major accidents, I was relaxed the entire time,” said Green. “I simply saw a problem and knew I needed to solve it.”

After local law enforcement took over and the situation was under control, Green pulled the shattered bits of glass out of his hand and went on with his workday as if nothing had happened.

Although the event felt like any other work day according to Green, the victim’s mother was thankful for his brave actions and began searching for her son’s hero. She only knew he was in the Air Force and he had four or five stripes on his insignia so she turned to social media for assistance in finding him.

“It was so important that I found him to thank him for being there for my son when I couldn’t,” said Laura Sousa, mother of the victim. “I wanted to make sure he knew how much we appreciated him and what an asset he is to not only his country but to his community. He truly is my hero and my son’s guardian angel.”

Through Sousa’s quest to find him, word of Green’s actions spread to his leadership, who felt he should be recognized formally in front of his peers, according to Maj. Christopher Daniels, 824th BDS officer in charge of MedCell.

“Green demonstrated service before self by rushing to the aid of someone in need,” said Daniels. “His actions that day were outstanding and set an example for the other members of the 824th BDS.”