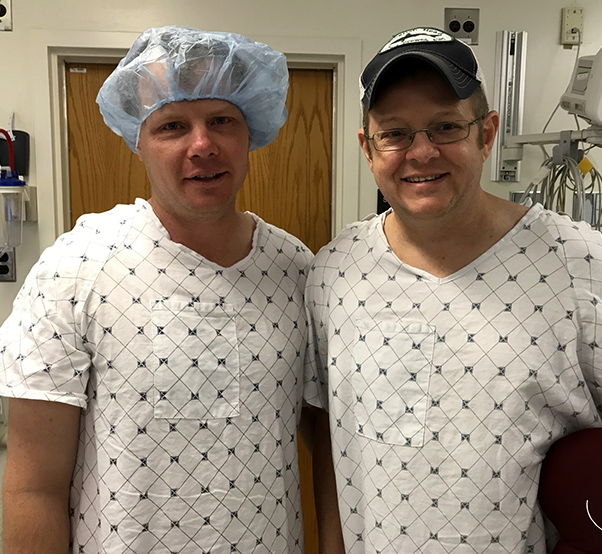 Sgt. 1st Class Rob Harmon (left) stands with Kai Johns at MedStar Georgetown University Hospital in Washington, District of Columbia on April 27 before undergoing surgery to donate a kidney to his old Army buddy. Harmon was a perfect match and his living donation saved Johns’ life.

Sgt. 1st Class Rob Harmon, the noncommissioned officer in charge of the 3rd Infantry Division Sustainment Brigade communications section, sat waiting for a meeting at Hunter Army Airfield in December 2016. As he scrolled through his Facebook feed on his phone, he saw a post that would not only change his life, but save someone else’s. The post read:

“Seven weeks ago Kai went in to the hospital in end stage renal failure. Fast forward nearly two months and he is being kept alive by dialysis three days a week. Please keep him in your prayers as the search continues for a kidney.”

The post struck a chord with Harmon, since Kai Johns, the subject of the post was an old Army buddy. They had served together at Fort Bragg, N.C., from 1995 to 1997, working assault command post operations in support of the 18th Airborne Corps.

Although their work shifts prevented them from seeing each other often on the job, Harmon and Johns spent a lot of time together outside duty hours. They went to concerts together, and Johns even introduced Harmon to the woman who would later become the sergeant’s wife.

“We were having fun like normal 20-year-olds do,” Harmon reminisced. 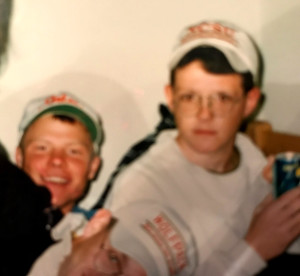 Sgt. 1st Class Rob Harmon (left) and Kai Johns in 1997 when they served together in the 50th Signal Battalion at Fort Bragg, N.C. They spent a lot of time together outside the office.

Fast forward nearly two decades later, when Johns’ health began to deteriorate quickly. As a fifth-generation polycystic kidney disease carrier, he had been reduced to about six percent kidney function by August 2016. He lost approximately 50 pounds after a 45-day hospital stay. Harmon knew had to act fast after seeing the social media post.

Harmon spoke with his wife, who was very supportive of his intentions to at least find out if he was a match for Johns. He filled out a questionnaire and received his first blood kit to complete in January 2017.

After many bloodwork tests and a thorough physical, Harmon found out that he was a healthy match in March.

“According to the doctors, our match was as close as you can get,” Harmon said, with tears filling his eyes.

In total, four months passed from the date that Harmon saw the post to the day of the operation.

On the morning of the surgery, April 27, Harmon arrived at MedStar Georgetown University Hospital in Washington, D.C., with Johns’ family to begin the final preparations for the operation. The two sat next to each other in the pre-operation room as several nurses came to conduct various tasks related to the surgery.

Harmon had never experienced anesthesia before, and he was a bit nervous, especially after the anesthesiologist told him a little-known fact that directly impacted him.

“Redheads take more anesthesia, generally, than most other people,” the specialist said.

Around 7:30 a.m., Harmon was wheeled to the operation room. After receiving an IV and an oxygen mask, he was told to count down.

When he finally awoke from the anesthesia, he felt his blood begin to rush.

“It felt like my body was imploding,” Harmon said. “It literally felt like a black hole was forming in the center of my body.” 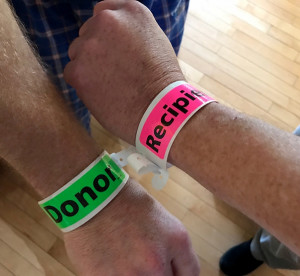 Sgt. 1st Class Rob Harmon shows off his “Donor” bracelet and Kai Johns his “Recipient” bracelet before undergoing kidney transplant surgery April 27 at MedStar Georgetown University Hospital in Washington, District of Columbia. They became friends in the Army more than 20 years ago.

After about an hour, he calmed down and started recovering normally. He was up and walking around the next day.

Once Johns woke up, the change in his demeanor was almost instantaneous, Harmon said. Johns began walking the halls the same night as his surgery, even though the doctors told him to wait. It was clear that the new kidney was working as it should.

“It is a great blessing,” Johns exclaimed. “Knowing that someone would step up and offer a piece of them to preserve your quality of life is quite an honor.”

When asked why he did it so quickly and willingly, Harmon was brought to tears as he answered.

“If it wasn’t for him, I wouldn’t have my two girls right now,” he said. “If nobody else did it and I knew I could, how could I live with myself if I didn’t donate? How could I look my kids in the face and not donate when I could save his life?”

Considering that less than one percent of those in need of kidneys actually receive them, Harmon’s decision had a huge impact.

“Until you are put in that position, or until you are aware of it, you don’t give two thoughts about it until it’s staring you in the face,” he said.

The selfless service that his 22 years in the Army had instilled in him made it an easy decision for Harmon. It was the perfect ending to his career, as he is retiring on August 1, 2017.

“With all the negativity that we see,” Johns said, “I was hoping that there was still good left in the world.”

That good came in the form of his old friend, Rob Harmon.

Soldier helps save life of man struck by lightning