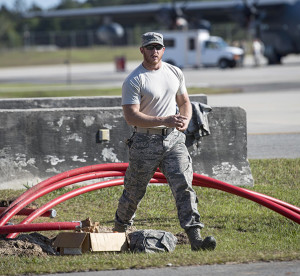 Staff Sgt. Nicholas Worley, a 23rd Civil Engineer Squadron electrical systems craftsman, crosses the flightline after remarking wires, April 13, 2017, at Moody Air Force Base, Ga. In January 2012, Worley was diagnosed with chronic myelogenous leukemia, an uncommon form of blood-cell cancer that starts in the blood-forming bone marrow cells. He’s currently in remission and goes to the cancer center every three months to ensure his treatment is still working.

While CML made him fatigued, caused joint pain and even activated the shingles virus, Worley’s attitude and strength gave him the drive he needed to view it as just another obstacle.

“If you put an obstacle in front of me, I’m either going to bulldoze through it or find a way around it,” said Worley, who hails from Anchorage, Alaska. “That’s who I am as a person. I never went into the ‘pity party’ stage or the ‘why me’ stage. That gets you nowhere. I looked at all my friends around me and I realized why not me. I knew that God only gives the hard things to the strongest; he puts things on you when he knows you can handle it. Yeah it might be stressful, but if you know these things are happening because you can handle it, your entire outlook will change.”

“That’s my brother from another mother right there,” said Shaw, who has known Worley since 2010 and took him to the ER the day Worley was diagnosed. “When you spend that much time with someone you develop an emotional attachment and you don’t want to see someone go through that so whatever he needed I was there. I can’t tell you how vital I was to his recovery, but I can tell you how important he is to me. I didn’t want to lose my friend, wingman and brother. I just wanted to support him and I was willing to do whatever I could to help him. I didn’t want to be negative and worry about things he wasn’t worried about; he’s one of the strongest people I’ve ever met.”

Physical and mental strength along with setting and meeting goals helped Worley get through his recovery.

“When you have the goal that it’s not going to beat you or bring you down, you do what the doctors tell you,” said Worley. “But that positive outlook and outlet can help everything work out. I was diagnosed at 22, but I wasn’t going to let cancer define who I was.”

Worley’s determination to not let cancer define him stemmed from his desire to detach himself from the stigma surrounding people who live with cancer.

“Every time I tell someone I have cancer they say, ‘but you have hair,’ or they say ‘but you don’t look sick,’” said Worley. “Cancer can happen to anybody. I’ve met a six-year-old with cancer that is happy even with a terminal illness. It’s more about the person than the sickness.”

While going through treatment, Worley experienced flu like symptoms, headaches and chills but Worley’s friends and coworkers expressed that neither his attitude nor his drive ever wavered.

“He’s a very strong individual and nothing gets him down,” said Kenneth Clark, a 23rd CES electrical manager. “He never changes; he’s the same person that he was before the cancer.”

Before CML, Worley graduated basic training in 2008 and was stationed at Moody Air Force Base. He deployed in 2010, where he began working out and developed a passion for maintaining his physical strength.

“When Nick first got here, he was a skinny little feller,” said Clark, who has worked with Worley since he came to Moody AFB. “When he deployed, he got into working out so he came back a lot bigger, he started getting smaller and after that, he found out he had cancer.”

One symptom of CML is weight loss, which caused Worley to lose close to 30 pounds of muscle he had gained. Once Worley got into remission, he quickly bulldozed through that.

“When I joined the military I was 149 pounds,” said Worley, who bulked up to 190 pounds while deployed. “I got cancer and dropped to 160. People that knew I was into fitness would see me and say I was looking small and it just lit that fire that I needed to get back into the gym.”

Initially, Worley was on a medication that worked long enough for him to go into remission then became ineffective. He switched to a new medication and has been in remission ever since, going to the cancer center every three months to ensure its still working.

“Once I got into remission, I was able to get back up to 215,” said Worley. “The gym plays a major part in my remission status because I can see my body progressing and getting stronger and I know I’m not feeling sick.”

While some may consider Worley’s ongoing battle with CML a great story, he knows he’s just getting started.

“This isn’t the end or the start for me,” said Worley. “I’m not doing this for the recognition; this is just a part of my story. You can’t let people dictate what you’re going to do in your life or your career. Every time you tell me I can’t do something, I’m going to try to prove you wrong.

“My sickness doesn’t define me because I’ve turned it from a weakness to a strength,” said Worley.

I lost my son: Airman turns tragedy into therapy through resilience