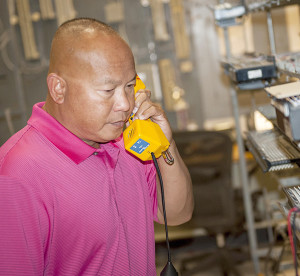 Khanh Phan, a 96th Communications Squadron telephone maintenance technician, conducts a routine check of telephone cables at Eglin Air Force Base, Fla. The 23-and-a-half year Air Force veteran and his mother, Ha, fled South Vietnam in April 1975. They narrowly escaped the invasion of Saigon by North Vietnamese troops for a new life in the United States.

Khanh Phan appreciates every day of his life here.

It’s a life he knows could’ve been different, had him and his mother, Ha, not fled South Vietnam in April 1975.  They narrowly escaped the invasion of Saigon by North Vietnamese troops, which ended the 21-year long Vietnam War.

Phan, a telephone maintenance technician at the 96th Communications Squadron at Eglin Air Force Base, Fla., was six years old when he and his mother left what later was united as the Socialist Republic of Vietnam.

“I really don’t know a lot about Vietnam, just what my Mom told me,” he said of the second longest war in U.S. history.

The 48-year-old was born in a South Vietnamese village.  His father died from an illness leaving behind his mother and three children.

Phan remembers few details of his journey to the States, but Eglin turned out to be his final destination.

His uncle, who was in the South Vietnamese Army, asked his mother if she wanted to come to a nearby military base to get a job and work with him, Phan recalled.  She said yes.

After landing a job, Ha and Phan, the oldest child, moved in with his uncle while she worked on base.

She worked on base for only a few months when they got the life-changing news in late April 1975.

“She was told to ‘get on a plane, you’re going to the United States,’” he said.

He remembered losing one of his flip flops while running on a hot pavement to a crowded helicopter.  His mother, who was running ahead of him, later told him a man picked him up and carried him to the helicopter.

The pair flew to an aircraft carrier and eventually ended up in the United States.

They had nothing, but the clothes on their backs.  There was no time to get his younger brother and sister.  They remained in South Vietnam.  Phan’s brother died a few years later of an illness.  His sister remained, starting a family there.

The pair’s journey eventually led them here, which served as one of four main U.S. Vietnamese refugee processing centers.  Phan and his mother were two of more than 10,000 people housed at a “tent city” at what was then Auxiliary Field Two.

“We ate meals ready-to-eat while we were there,” Phan said with a smile.  “I remember liking the peanut butter out of a can.”

After a few months in the tent city, a widowed lady from Pensacola sponsored them and the pair moved in with her.

Not long after, Phan’s mother was introduced to Airman 1st Class Rory Jones, who was stationed in Pensacola.  They were married in 1977.

“He always treated me like I’m his biological son,” Phan said.  “He is a good father to me.”

At first, Phan had a difficult time adjusting to life in the U.S.

“There were hardly any Asian people in Pensacola when we got there,” said Phan, who started school there in the second grade.  “There was only one other Asian kid in my school.  I used to get into fights all the time because the other kids didn’t like me.”

The family relocated to Shalimar, where his father served at the 55th Aerospace Rescue and Recovery Squadron here.

Phan found having two military bases in proximity offered more diversity and acceptance in the area, which helped him better adjust to life in a new land.

From the third grade on, he grew up as a normal kid, attended various area schools and played football and baseball.

Phan followed his step-father into the Air Force in 1992.

“I was 23 years old, my identification card expired and I didn’t have any insurance,” he said.  “I saw the military as a good way to get benefits.”

He also got married that same year.  Four years later, his sister, her husband and two children finally came to America in 1996, sponsored by Phan’s parents.  They now live in Texas.

“When we met after all that time had passed, we were like strangers because we hadn’t seen each other for so long,” he said.  “We’re a lot closer now.”

During that time Phan raised a family.  He has three sons, 22-year-old twins and an 11-year-old.

He retired in 2015 as a senior master sergeant.  He held his retirement ceremony at the Air Force Armament Museum here.  His mother attended the special occasion and was proud of him for completing a successful career.

“I loved every day I was in the military,” Phan said.  “It was a great environment for me.  I loved the people and the camaraderie.  It was a family.  The hardest part of being in the Air Force was the separations from my family when I deployed.”

John McCain, the 96th CS chief, Voice Network Systems, first worked with then-Tech. Sgt. Phan in 2004.  McCain spoke of him as a great asset, then and now.

“He has a great work ethic and is always willing to take on more and do anything asked of him,” McCain said.  “He’s very respectful and courteous to everyone.  Khanh is a supervisor’s dream employee.”

Following in Phan’s footsteps, his twin sons will join the military as commissioned officers this summer.  One is scheduled to join the Air Force after completing the Reserve Officer Training Corps program at Louisiana State University; the other will attend Marine Corps officer candidate school at Marine Corps Base Quantico in September.

“I encourage any high schooler to join the military for at least four years, except if they are going to college,” he said.  “They can learn a trade or a skill and receive benefits.  Where else are you going to go and work for 20 years and get a paycheck, base privileges and benefits for the rest of your life?”

Phan said he is happy he ended up in America.

“My life is a lot better here than it would have been in Vietnam,” he said.  “There are a lot more opportunities here.  I’m in good health.  The military taught me to eat right, exercise and gave me the opportunity to stay in shape.  As a civilian, I can exercise three times a week.  The military has been great to me.”

Overcoming the shadow of death: An Airman’s fight against depression