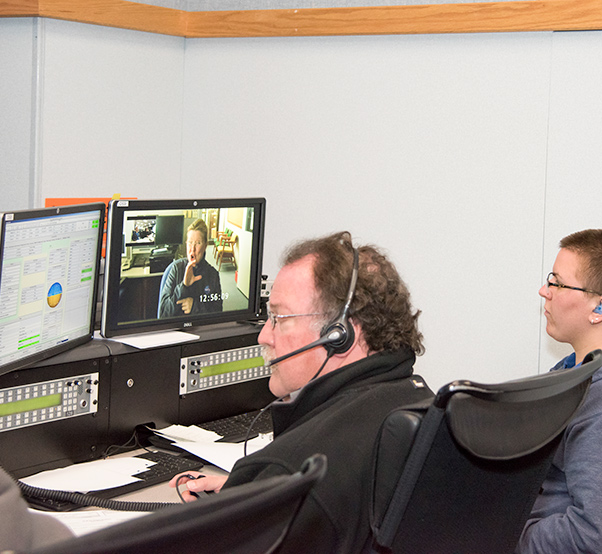 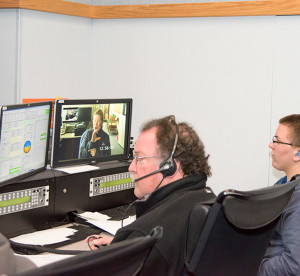 Johanna Lucht, observing data from the Mission Control Center at NASA’s Armstrong Flight Research Center in California, received flight communications from an interpreter, seen on Lucht’s monitor, through American Sign Language. Two-way visual communication was established between Lucht and the interpreter, located at NASA’s Langley Research Center in Virginia, for the flight. Interpreting technical terminology often requires cooperation to develop specific signs to ease communication. Using a familiar interpreter who is adept or practiced in the technical terminology of a NASA flight was beneficial, Lucht says.

On April 4, 2017, which was the 34th anniversary of the Space Shuttle Challenger’s maiden voyage, a modified NASA Gulfstream III took off at Edwards Air Force Base, Calif., to become the first NASA aircraft to fly with a twisted wing flap configuration.

Meanwhile, inside NASA Armstrong Flight Research Center’s mission control center were engineers working the flight and validating technology to test improved flight efficiency through the use of a twisted flap. They watched their monitors, analyzed the flight’s early stages, and all wore headsets to listen in on communications — all except one.

In the front of the room, wearing no headset, sat a young systems engineer named Johanna Lucht who, on a day of firsts for NASA, became the first deaf engineer to carry out an active role in a NASA control center during a mission.

Lucht, who was born deaf, earned the training position of Systems II engineer for the flight, in which she was responsible for observing and evaluating data related to the aircraft’s GPS and Navigation Systems, as well as analyzing inflight data, to monitor how well the aircraft is performing in flight.

The milestone of having a deaf engineer in a role with such responsibilities was not without its challenges. It was the ability to overcome challenges, however, that made NASA and Johanna the perfect fit.

Lucht was born in Germany, where resources for deaf people were, at the time, limited. As a result, she was unable to communicate through much of her childhood. In fact, Lucht developed an understanding of mathematics before she acquired language. It wasn’t until the age of nine when she learned her first true language, which is American Sign Language, or ASL, followed by English.

It was that passion of math and the ability to face challenges that led Johanna to her eventual studies of science, technology, engineering and mathematics, or STEM, and began her road to NASA.

“Math was the first thing I really understood in school, so I always had a love for it, growing up,” Lucht stated. “It was something I worked at understanding, and it became my favorite subject. I grew up skilled in math.” 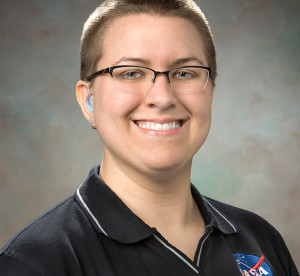 Johanna Lucht was born deaf in Germany, where resources for deaf people were, at the time, limited. Her school did not provide an interpreter until Lucht was 9 years old. Lucht has worked with NASA Armstrong’s research and engineering department, sensors and systems development branch, and vehicle integration and test branch since being hired by NASA. She says the challenges she faced growing up as a deaf person in the hearing world in-part prepared her for her role at NASA.

Lucht moved to Alaska, where there were more accessible programs for deaf individuals, as well as exposure to the deaf community. This allowed her not only to mature her communication skills, but to expand her studies in STEM. One program, Summery Academy 2008, introduced Johanna to computer science, and she began to immerse herself further into this study.

As a computer science student at the University of Minnesota–Twin Cities, Lucht began receiving emails about a NASA internship program. Initially, she had no intention to apply for the program, but finally, on the third email, she gave it a try. Shortly after, she was accepted to intern at NASA Armstrong.

“NASA offered me the opportunity, and I was shocked,” Lucht recalled. “When I was a kid, I used to learn about Challenger and the shuttles. It was interesting, but I never really thought I’d be a part of NASA. When I read the offer in the email, I closed my laptop, went for a walk, came back, re-read it, cleaned my glasses, and read it again. I pinched myself, and decided this was really happening.”

As a young intern in NASA Armstrong’s research and engineering department, Lucht worked on the interface for a mobile app version of the Ground Collision Avoidance System, meant to alert pilots to the detection of potentially hazardous terrain.

Lucht’s talent and ability to meet challenges efficiently and analytically were evident to NASA, and she was offered a position shortly following her internship.

Lucht joined NASA Armstrong’s Sensors and Systems Development branch, before transferring to the center’s Vehicle Integration and Test branch in 2016, which designs, integrates, and tests research systems onto airborne platforms.

“Johanna was given an assignment to run environmental testing with the lab technicians. It could have been a challenge, because she had to communicate with a group of strangers she didn’t know,” Schweikhard remembered. “Under normal circumstances, I expect it to take four to five days to complete. Johanna did it in two days. She quickly worked out a way to communicate with the team, to conduct the tests.”

Another challenge was to find an interpreter with technical skills in the language. Many interpreters have liberal arts backgrounds, and may sometimes struggle to verbalize correct terminology and interpret highly technical content in sign, where some of technical terminology does not exist in ASL. Instead, they often have to be spelled out by hand. 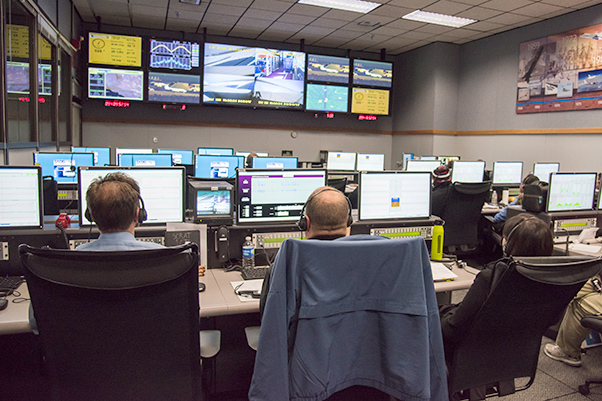 NASA Armstrong’s Mission Control Center, or MCC, is where culmination of all data-gathering occurs. Engineers, flight controllers and researchers monitor flights and missions as they are carried out. Data and video run through the MCC and are recorded, displayed and archived. Data is then processed and prepared for post-flight analysis.

As a result, deaf clients and interpreters have to work together to invent some signs in order to ease communication. It becomes a challenge when the technical interpreter who has been trained in the terminology is not used consistently. This results in the deaf client being forced to teach each new interpreter the technical terminology repeatedly, in a limited time before, during, and after meetings.”

To address these issues for a mission control setting, a system was established in which an interpreter who worked with Lucht regularly during project meetings was arranged to be present at NASA’s Langley Research Center in Virginia, where she is located, and was able to listen to communications of the flight as they happened. Meanwhile, two way visual communication between Lucht and the interpreter was established.

As the interpreter, who was completely visible to Lucht on one of her two monitors, listened in on flight communications, she was able to convey those communications to Johanna, using American Sign Language. After successfully practicing the communication, it was decided that Lucht was ready to take on the training Systems II role for the actual flight.

On the day of the actual flight, Lucht says she was more excited than nervous. She settled into her seat, next to Schweikhard, and prepared for the flight.

From the moment the flight took off, Johanna focused on her monitors, began analyzing data, and the communications proceeded seamlessly.

Lucht discussed one moment during the flight, in which she was seemingly one of the few people to pick up on a particular flight maneuver before it had even been communicated.

The pilot was to perform a maneuver, called a Pushover-Pull-up, or POPU. In the maneuver, the pilot dips the nose of the aircraft, to produce low gravitational forces, and then pulls up, to create higher g-forces on the aircraft to test structural integrity. The maneuver was scheduled to be coming up, but as it had not yet been stated, it was not yet expected to be done.

Lucht noted a change in the data coming in from the aircraft. She looked over to the interpreter, but since no communication had been made about the maneuver, there was nothing for the interpreter to sign over to Johanna. She then looked around the control room, and no one seemed to notice or commented on the maneuver. Then the pilot communicated that he had completed the maneuver.

“The communication was a bit mixed-up at that point, and I noticed someone placed their hand on their forehead, so I wrote down on paper and passed it to Keith, asking if the pilot jumped ahead and had done the maneuver. He nodded his head,” Lucht recalled.

Johanna was not only adequate in her role during the flight, but she excelled, showing that she can work in a fast-paced environment as effectively as other engineers in the room, without any unnecessary complications.

Lucht says the challenges she faced while growing up as a deaf person in the hearing world have, in fact, prepared her for her role at NASA. 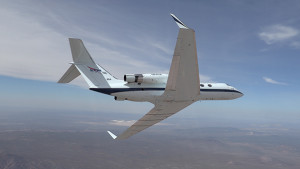 Lucht’s role in NASA Armstrong’s Mission Control Center was Systems II engineer, monitoring flight performance and data for an Adaptive Compliant Trailing Edge, or ACTE, flight. The flight marked the first time NASA has flown a research testbed with a twisted wing-flap configuration. With the Flexsys, Inc. twisted flap configuration, NASA engineers are able to monitor any handling characteristic changes associated with the technology, which may improve aerodynamic efficiency.

“When I was a child, I essentially missed my schooling between preschool and third grade. The catch-up was of course overload, but that really helped me in being able to work here and handle moderate to large information on a daily basis. My special education teacher in Germany taught me to always try, and to never give up.”

Lucht also points out that she does not consider deafness itself to be a challenge. Rather, she says, the challenge is presented through the environment.

“Imagine yourself in a deaf world instead of a hearing world, where nearly everyone uses American Sign Language. Also imagine anything you can hear through sound, like public announcements, customer services, festivals, work, movies, but this time they all are conducted in American Sign Language via video. Unless you know ASL, you will experience most of the challenges we deaf people experience. We all meet the challenges that are presented in the environment, and do what we can to overcome it.”

Indeed, in an agency where overcoming challenges is considered the status quo, Johanna Lucht fits in entirely.

Meanwhile, Lucht has advice for people who are growing up, facing those challenges.

“I never thought I would work for NASA, until they offered me a spot. You must always keep an open mind for opportunities. You never know when one might come by. If it’s not NASA, then maybe other areas, some of them might still entail working with NASA. Keep an open mind, and do what you enjoy.

A first sergeant’s 20-year journey from hardship to success

I lost my son: Airman turns tragedy into therapy through resilience