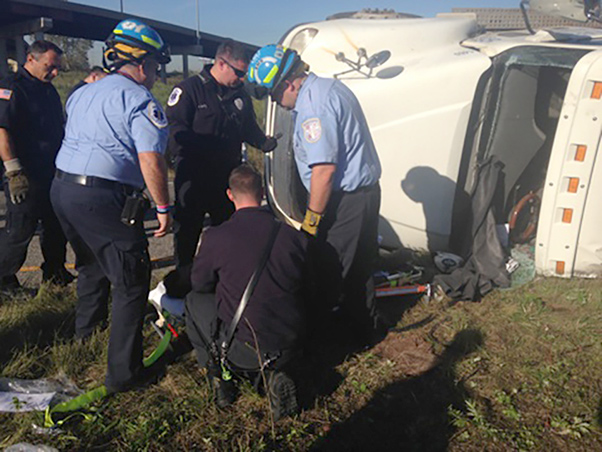 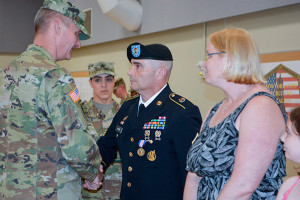 In a ceremony at Fort Hamilton, N.Y., Master Sgt. Michael Huson received the Soldier’s Medal on June 6, 2017, for his heroic actions in New Jersey last October.

Master Sgt. Michael Huson recalled having a lot on his mind as he drove down Interstate 78 to his New Jersey office one morning last October.

As Huson pulled off the highway onto exit 57, the first sergeant and acting company commander for the Newark recruiting battalion was quickly shocked back to reality when he saw that an overturned tractor-trailer was lying on the perimeter of the jug handle-shaped road.

Initially, Huson assumed it was an old accident. It isn’t uncommon, he said, to see large vehicles pulled off to the side of the road. But this time, that wasn’t the case.

“It was kind of surreal,” Huson said. The stone the truck had been hauling was scattered across the adjacent field. “The tires were still moving, and there was smoke [coming from the vehicle]. That’s when I realized: this just happened.”

That’s when Huson decided he must apply what he had learned in the Army and act to help anyone who might be in danger.

On June 6, in a ceremony at Fort Hamilton, N.Y., Huson received the Soldier’s Medal for his heroic actions on exit 57 that day.

Huson said he understands the medal’s significance, and that Soldiers act with bravery all the time. Nevertheless, he said, he felt humbled to be recognized for his own efforts.

“It is great to see the Soldier that truly lives the Army values,” said Lt. Col. Ed Croot, the former Mid-Atlantic recruiting commander. “In that split-second decision, when he sees the problem, he acts. That is what being a Soldier is about.”

Selfless service
Being the first on the scene, Huson jumped out of his vehicle and assessed the situation. The driver’s side of the truck was resting on the ground and two people were trapped inside. Gasoline was leaking from the passenger-side fuel tank, he said.

Huson said he climbed onto the back of the vehicle and ran across the semitrailer to reach the vehicle’s cabin. Another person arrived on the scene around the same time. Huson handed the man his cellphone and asked him to call 911.

Since the vehicle was positioned on its side, the passenger door acted as a giant, heavy hatch.

“It was heavier than I thought it would be, so I had to put something into it,” Huson said.

Eventually, he was able to pry the door open, he said. And when he looked down into the cabin of the vehicle, he was surprised to see a female standing there looking up at him.

“She looked dazed and confused. From the way she was moving, it let me know she wasn’t injured that bad. I asked her if she was OK … she didn’t say a word,” he said. “She just wanted to get out of that vehicle.”

While the other man who had arrived on the scene held open the passenger side door, Huson scrambled down inside the cabin. The two of them were able to lift the woman up to the top of the vehicle. Once she was secured, Huson began administering first aid to the driver.

“He was lying down on the driver-side door and was a bloody mess. His face got banged up pretty good. His eyes were open, and he was staying awake, but he wasn’t with it,” Huson said. “His feet were under some debris, so I had to pry them out. I then stopped some bleeding that, I believe, was coming out the back of his head. I found a somewhat clean T-shirt that I put down behind him.”

As the fuel continued to leak, the sergeant worried that the two would be trapped if the vehicle were to catch fire. In an attempt to secure another way out, Huson tried to kick out the windshield.

“It’s not like the movies … it didn’t budge,” he said. “I tried to kick it a couple of more times, I don’t know why, but I thought that I might be able to do something. I was not leaving that guy. I was prepared to stay with him the whole time.”

By the time help finally arrived, Huson had been providing urgent care to the driver for more than 20 minutes.

“When I heard the firetrucks … I was just thankful,” Huson said.

Needing to get to the driver as quickly as possible, firefighters threw a thick blanket to Huson. He used the blanket to shield both himself and the driver by kneeling down as emergency crews sawed through the windshield, sending shards of glass everywhere, he said. Once completed, they extracted the driver and started treatment.

“After all that, I was able to exit out the vehicle just by walking out,” he said. “The training just kicks in. Everything I had up until that point in time has trained me to be patient and calm. When you have somebody down, you want to start checking them out, assess the bleeding, and start looking for other injuries. Then you want to get them out of that situation and get them someplace better. That training was in there the whole time.”

Shortly after emergency responders took control of the scene, Huson was back on the road heading to Newark. During that time, he called his commander and explained what happened.

“It was pretty special,” Croot said, recalling the conversation. “I know the traffic in New Jersey, and 99 percent of the people won’t pull over, so I was really impressed by that.”

For Huson, he proceeded through his work day with the same focus and calm he had used to rescue the truck’s passengers.

“When I finally got to Hackensack, I was talking to one of my Soldiers and realized I still had blood all over my hands. That’s when everything kicked in. That’s when I realized in the back of my mind what had happened. I was fairly calm the whole way through. I’m not saying that to be arrogant, but I felt the whole time that everything was going to be OK. That’s what I stayed focus on.”

The Soldier’s Medal is considered to be the Army’s highest peacetime award for valor. According to Army Regulation 600-8-22, with the Soldiers Medal, “the same degree of heroism is required as that of the award of the Distinguished Flying Cross. The performance must have involved personal hazard or danger and the voluntary risk of life under conditions not involving conflict with an armed enemy.”

Huson joined the Army 23 years ago, and has spent the past 14 years with the U.S. Army Recruiting Command.

“It seemed like a good fit at the time for my family,” Huson said. “Recruiting needed some good leaders and I thought I was one of them.”
Currently, Huson serves as a guidance counselor at the Military Entrance Processing Station at Fort Hamilton.