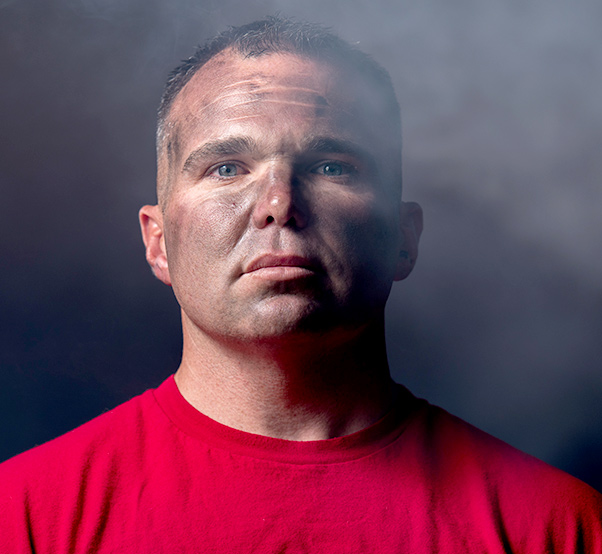 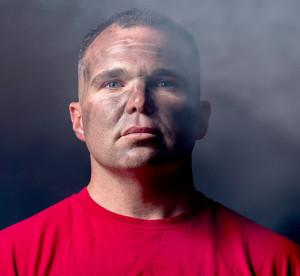 Tech Sgt. Michael Cleary, 56th Equipment Maintenance Squadron, aircraft structural maintainer poses for a portrait Aug. 6, 2018 in Glendale, Ariz. On July 14, 2018, Cleary aided in saving the lives of three families from a fire while on leave in his hometown of Manteca, Calif.

Powerful gusts waded between the rows of houses lining the street of a sunny suburb of Manteca, Calif.

It was a hot July day and Tech. Sgt. Michael Cleary, 56th Equipment Maintenance Squadron aircraft structural maintainer, noted that it was unusually windy in his hometown.

He had just left his aunt’s house, a stop along the way of a family-visit vacation, when he noticed a peculiar scent in the air.

“I could smell smoke, but I wasn’t sure if it was someone who was barbecuing,” Cleary said. “Shortly after, I noticed ash floating in the air and saw flames coming over some houses.”

Cleary spotted a blazing fire quickly spreading through the neighborhood, engulfing ash trees and cars, and traveling toward other homes just one block away from his aunt’s house. Without hesitation, he jumped out of his car, ran to the scene of the fire, and sprung into action.

“My first thought was to see if any one needed help, so I ran up to the first house where the tenants were still inside sleeping, woke them up, and helped them exit,” Cleary said.

Cleary looked over and noticed the fire quickly spreading toward two other homes nearby, so he bolted over to help those as well. Inside one of the homes was Carin Rhodes, a tenant of the property, who heard Cleary shouting just outside, “Hey! Hey! There’s a fire in your backyard!”

“I rushed to a window where I could see that there were three Modesto ash trees on fire,” Rhodes said. “I could feel the searing heat through the window. As I ran to the front door, I could still hear the yelling man alerting my neighbors. I watched this man go from house to house alerting the neighborhood without hesitation. All the while, I was completely amazed at how quickly he reacted to everything and how fluid he was.”

As an aircraft maintenance professional in the U.S. Air Force, Cleary receives routine fire safety training to prevent the spread of aircraft related fires should they happen.

“That training helped me remain calm throughout the situation,” Cleary said. “The whole process felt instinctual; [I needed] to prevent the spread of fire the best I could.”

Cleary put himself in harm’s way by grabbing a water hose and attacking the flames head on before the Manteca Fire Department arrived on scene. He even risked his physical health by inhaling smoke.

“I had a cough for the next two days but it was all worth it knowing that I played a small part in preventing three families from possibly losing their homes,” Cleary said.

Within 30 minutes, Cleary, along with the Manteca Fire Department, had cleared out three homes, completely doused the flames, and helped ensure the safety of three families. With his help, Cleary prevented catastrophic damages to their homes.

Cleary’s inspiration to serve others stems from his grandfather who was a volunteer firefighter and police officer in Manteca for more than 20 years.

“I feel that what I did, anyone should have done,” Cleary said. “As a kid, I grew up pretending to be a firefighter. For me, this was like my ultimate childhood dream.

“I have no doubt in my mind that this was something my grandpa would have done,” Cleary said as prideful emotion filled his eyes. “I think we’re given opportunities throughout our life to make differences, and it’s on us whether we take action and do it. Given the opportunity, I will always do what I can to help someone who’s in need.”