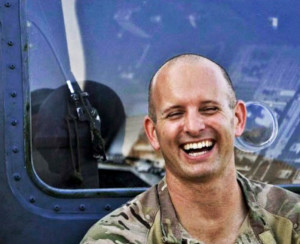 With 10 years serving on active duty and another 10 serving in the Air Force Reserve as an aerial gunner, Master Sgt. Pete Pavenski saw a lot of action. He performed duties in the back of a combat-search-and-rescue helicopter where he took part in dangerous rescue missions on the battlefield, saving the lives of an untold amount of injured service members. But the missions got to him. He took his own life Sept. 18, 2017.

Air Force veteran Stacey Pavenski, 46, of Palm Bay, Fla., has post traumatic stress disorder, but she didn’t get it from serving in combat. It came from her husband’s combat struggles that drove him to take his own life in their bedroom, Sept. 18, 2017, while she was in the kitchen. He was 45.

That fateful day has led her on a journey to bring awareness to PTSD and traumatic brain injury disorders that contributes to the 22 veterans a day who take their own lives. During PTSD awareness month, she has joined forces with several non-profit organizations that provide assistance to those suffering with PTSD and has vowed to share her story and get the resources out there to help others.

Wearing shorts and a T-shirt with the words ‘Not All Wounds are Visible’ broadcasting her new mantra, she shares glimpses into her life as a military spouse and living with PTSD.

She met her husband, Master Sgt. Pete Pavenski, at Moron Air Base, Spain, where she was stationed in 2002. They fell in love and she left the service to be with him. They were married in 2010.

“He was such a good man,” said Stacey describing her husband as her best friend and a selfless service member who saved lives as part of an Air Force Reserve rescue unit.

With 10 years serving on active duty and another 10 serving in the Air Force Reserve as an aerial gunner, Pete saw a lot of action. He performed duties in the back of a combat-search-and-rescue helicopter where he took part in dangerous rescue missions on the battlefield, saving the lives of an untold amount of injured service members. But the missions got to him.

He was plagued with PTSD and sought help. Stacey even went with him to counseling to try to understand his plight.

That dark September night after a seemingly normal argument, Pete calmly walked past Stacey. A few minutes later he yelled to Stacey, “This is going to be loud!” He then pulled the trigger and shot himself.

“What I heard, what I saw and what I continue to relive in my head daily is why I have PTSD. It never goes away.”

“Pete got rid of his pain, but now everyone has pain,” said Stacey, referring to the couple’s entire family. “I don’t want anyone else to have to die.”

Pete’s death also came as a shock to his squadron members, a very tight-knit group of helicopter aircrew personnel. Known as the unit jokester, no one saw Pete’s suicide coming. “We had no idea and that’s what was unnerving for us,” said Chief Master Sgt. Randolph Wells, 301st RQS chief enlisted manager.

The chief recalls one particular mission that really got to Pete when he and his crew were flying in the “hotly contested” Helmand Province, Afghanistan, Oct. 31, 2011. “While on the ground performing casualty evacuations, bullets from an enemy sniper entered the cabin area narrowly missing him.”

Stacey hails her husband as a hero.

As a veteran herself, she describes being an Air Force spouse as “way more difficult” than serving.

“When you have to function in everyday life and worry about your spouse; when they call from afar you have to be upbeat. You have to put that face on for them.”

“When he came back, I started to notice the irritability. I noticed the isolation. He was always tired. He didn’t want to play his guitar anymore. There was a little more drinking than normal. And he woke up with nightmares, just agitated, irritable,” Stacey.

“Even though it was difficult for me, living with it as the spouse, I was not going to be a statistic. Meaning, I wasn’t going to divorce him. I was going to stick through it, thick and thin. But it became a statistic in another way,” she said.

Now Stacey’s mission is to get the resources out about PTSD and to “talk about it.”

For Stacey, PTSD came with myriad symptoms, one of them being nightmares that continued to haunt her until relief finally came in the form of a 67-pound service dog named Memphis Belle who rests at her feet while she talks nervously in a soft voice that reveals her fragility.

Midnight Sun Service Dogs in Alaska learned about Stacey’s difficulties through Pete’s squadron, the 301st Rescue Squadron, and gifted her the jet black Labradoodle two months ago. They train and place service dogs with wounded military members and veterans and pride themselves on specializing in PTSD therapy dogs.

Now when Stacey experiences nightmares, Memphis Belle’s training kicks in and Stacey finds herself face-to-face with a wet nose and tongue nudging her awake. Memphis Belle is trained to detect when her handler is struggling with difficult emotions that erupt unforeseen.

Stacey explains that Memphis Belle can also detect her uneasiness with crowds, another one of her symptoms, and shields Stacey by leaning against her legs to let her know ‘she’s got this.’

Not only does Memphis Belle protect her from potentially stressful situations, but she soothes her when she detects Stacey’s emotions heightening by placing her heart-shaped velvety football-sized head on Stacey’s lap.

“Suicide does not discriminate,” said Stacey pointing to the recent news of celebrity suicides, Anthony Bourdain and Kate Spade.

She explained that you have to have a support system. When she gets to a tipping point, she has a list of loved ones she calls.

“I called my mom to tell her I didn’t want to be here anymore. We talk through it. I’m still here. If my mom doesn’t answer the phone, I call someone else.”
Stacey says her life is not about that one single moment.

“When you feel like life is so hard and you’re ready to end your pain, realize that there are a lot of people who love you and you are putting it all on the people who love and care about you.”

“If I can talk about it (suicide) and get other people on board, they might have the knowledge, the know how to get themselves out of it.”

She explains that the color teal is for PTSD awareness; and the color purple represents suicide. “Not all wounds are visible,” she emphasizes, but the colors help make them easier to see.

“As difficult as it is to talk about it, we have to deal with it.”

She said she’s working on her grief. “Time is the hard part, being alone. You have to find reasons to laugh. It doesn’t mean you ever forget.”

Since Memphis Belle came into the picture she gets out more. Her new furry companion with gray bushy eyebrows is a welcome sight. “She’s a big dog, she needs exercise. I have to play with her, take her out. She makes me laugh. She’s perfect.”

Not only does Memphis Belle help Stacey, but Stacey regularly sees a therapist at the local Veterans Administration, takes medication and leans on her tight circle of friends and family for support.

“My focus is my purpose,” she said deliberately.

She wants those who are hurting and may be contemplating suicide to have access to the resources and she wants them to know they are not alone. She said PTSD does not have to mean suicide.

“The epidemic has to stop.”

The Elk Institute: The Elk Institute is a non-profit that was established to provide mental health education, consultation, treatment, and clinical research service to our military and veteran communities. Specializing in the treatment of psychological trauma (PTS, PTSD, shell shock, battle fatigue, etc.), services are provided at no cost to the individual warfighter. http://elkinstitute.us/

That Others May Live: That Others May Live Foundation provides immediate tragedy assistance critical support, and scholarships for the families of U.S. Air Force Rescue Heroes who are killed or severely wounded in operational or training missions. TOMLF also provides advocacy, guidance, and support to U.S. Air Force Rescue service members, veterans, and families affected by visible and invisible wounds. http://www.thatothersmaylive.org/