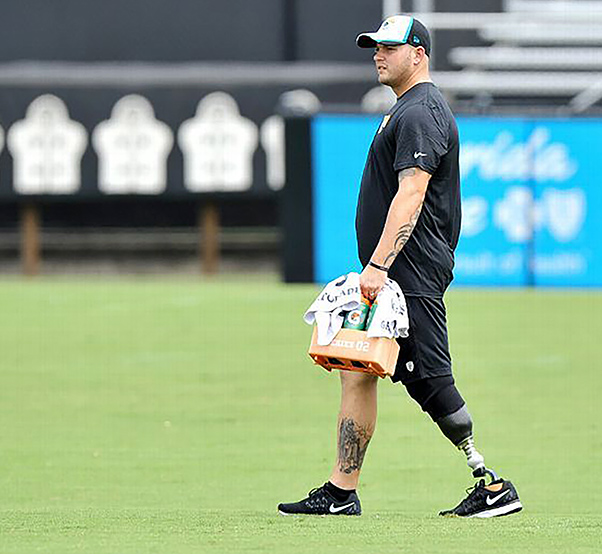 Former Sgt. Sean Karpf, who lost his lower left leg after he stepped on a pressure plate that detonated a buried bomb in Afghanistan, now works as a strength and conditioning associate for the Jacksonville Jaguars.

JACKSONVILLE, Fla.–On his second deployment to Afghanistan, then-Sgt. Sean Karpf led his squad along a narrow pathway between two streambeds in Kandahar.

Up ahead, about 300 meters, a group of suspicious men scrambled on the rooftop of a building. He and his squad moved in closer to pull security.

As he walked on the pathway, which had been previously cleared, his left boot stepped on a pressure plate. A buried bomb exploded.

In a daze, Krapf remembered looking down at the cloud of smoke. He had ringing in his ears; he could taste the chemicals from the bomb.

“It was just chaos,” he recalled of the June 2012 incident. “I could hear people yelling my name, but I was still stunned at that point and I really did not know what was going on.” 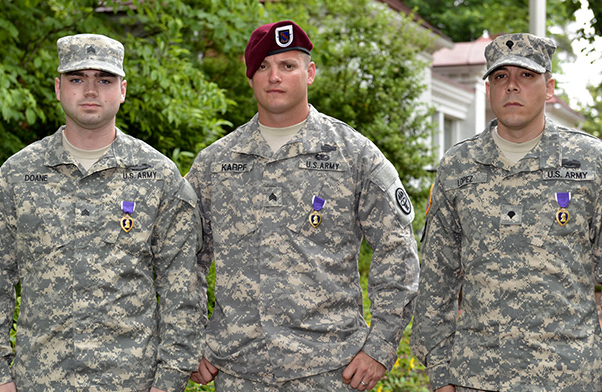 Sgt. Sean Karpf, center, poses for a photo after receiving the Purple Heart in a ceremony at Mt. Vernon, Va., June 10, 2013. Karpf, who now works as a strength and conditioning associate for the Jacksonville Jaguars, lost his lower left leg after he stepped on a pressure plate that detonated a buried bomb in Afghanistan.

Today, Karpf, 33, wears a prosthetic on his left leg that was later amputated below the knee.

He can often be seen in the weight room or on the practice field for the Jacksonville Jaguars — his favorite NFL team since he was 10 when they began to play in his hometown.

In his first year as a full-time strength and conditioning associate for the team, Karpf has found a new purpose in life that drives him.

Helping players get ready for each weekly battle on the gridiron against opposing teams reminds Karpf of his days as an Army sergeant.

“I love the preparation that goes into the games,” he said in a phone interview Tuesday. “It brings me back to military training.”

Recovery
Once the smoke cleared, the squad leader with the 82nd Airborne Division saw his injured leg and began to push himself out of the crater the bomb had left.

A medic put a tourniquet on him and he was placed onto a litter. As a medevac helicopter began to land, the Taliban insurgents fired a machine gun toward it and it lifted back up.

A firefight ensued and Karpf, who was still calling out orders to his squad, said an Army attack helicopter swooped in to make a few gun runs so the other helicopter could pick him up.

Karpf, who had played linebacker for a semipro football team in North Carolina, was about to face the biggest test in his life. 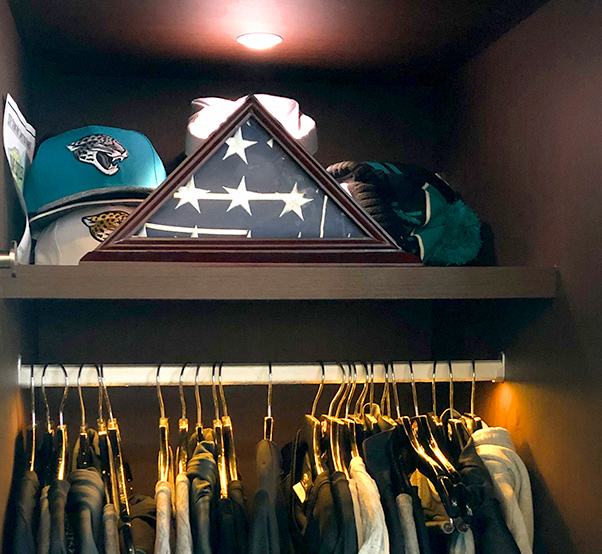 Former Sgt. Sean Karpf, a strength and conditioning associate for the Jacksonville Jaguars, gave U.S. flags encased in shadow boxes to players who support the local community, including veterans and their families.

He spent over a year at Walter Reed National Military Medical Center in Bethesda, Md., and had more than 20 surgeries.

The following year, he returned to sports. He competed in several swimming and track and field events in the Warrior Games and took home four gold medals.

“When I was working with the physical therapist, I made sure I got in extra work,” he said. “I had that goal in mind and I think it helped with my recovery.”

He also received a presidential send-off at the White House for a four-day bicycle ride that he and other wounded warriors participated in.

To the sergeant’s surprise, then-President Barack Obama spoke of his recovery and training in his speech.

“I didn’t even know that he was going to talk about me,” Karpf said, laughing. “I was sitting there on the bike and he mentioned my name and told the crowd I was competing in Warrior Games. I was like, wow, that was pretty cool.”

Dream job
Once he left the Army after almost six years, Karpf moved back to Jacksonville. No longer in uniform, depression began to set in and he stopped staying active.

He then started a program through a nonprofit that allowed him to take college courses and do an internship in the local community. He chose his favorite sports team.

At first, he did various office jobs for the Jaguars but then gravitated toward the weight room to help out players.

When his brief internship ended, the father of two was asked to come back to intern for the entire season last year.

Following the Jaguars loss to the New England Patriots in the AFC Championship game, Karpf came in for his last time with the team to clean out his locker.

Karpf was asked to report to Tom Coughlin, a two-time Super Bowl-winning head coach who now serves as the Jaguars’ executive vice president of football operations.

Coughlin decided to take on the former Soldier full time.

“I thought this would be a heck of a guy to hire for our strength and conditioning program because of what he brings to the table,” Coughlin said in a recent ESPN video about Karpf. “And also for our players to maybe get to know a young man who had made those kind of sacrifices for his country.” 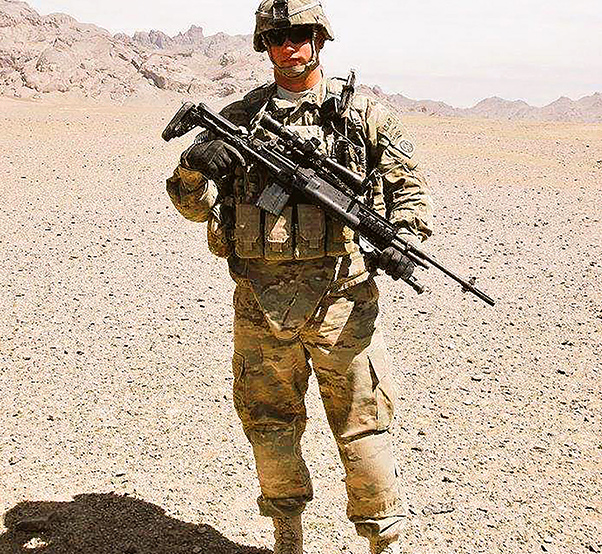 Former Sgt. Sean Karpf was a squad leader with the 82nd Airborne Division when he lost his lower left leg after he stepped on a pressure plate that detonated a buried bomb in Afghanistan. He now works as a strength and conditioning associate for the Jacksonville Jaguars.

Being able to be around the game he loves has been therapeutic for Karpf, who has just started on a master’s degree in injury prevention.

“As far as with the [post-traumatic stress disorder], it’s made it easier,” he said.

He also shares a special bond with those on the team, a similar connection he once had with his fellow Soldiers.

“You can see a brotherhood, but it’s not as prevalent as in the military,” he said. “But it’s still that team atmosphere and everybody coming together with that same goal in mind.”

As he was preparing to leave after last season’s final game, he gave folded U.S. flags encased in shadow boxes to players who volunteer in the community, some of those efforts helping veterans and their families.

“I did that before I realized that I was coming back,” Karpf said. “It was my way of saying thank you for everything you do in the community.”

As an honor to Karpf, some players even kept the flags on display in their lockers.

“It’s pretty cool going through the locker room and seeing the flags,” he said. “It means a lot to me.”