Two NASA Armstrong Flight Research Center F-15D Eagle aircraft used for research support and pilot proficiency are getting new paint jobs.
The aircraft sported charcoal grey when they were U.S. Air Force jets prior to their transfer to California in 2010 to the NASA center located on Edwards Air Force Base.
To make the aircraft more visible to both ground cameras and to the chase plane pilots, who follow the aircraft to observe and document, NASA Armstrong officials chose a high-visibility paint scheme. The new paint job consists of NASA’s traditional white with a navy blue stripe.
The F-15Ds new paint job was delayed because they were still used from time to time to support Air Force missions. The charcoal grey adheres to mission requirements set forth by the Air Force. 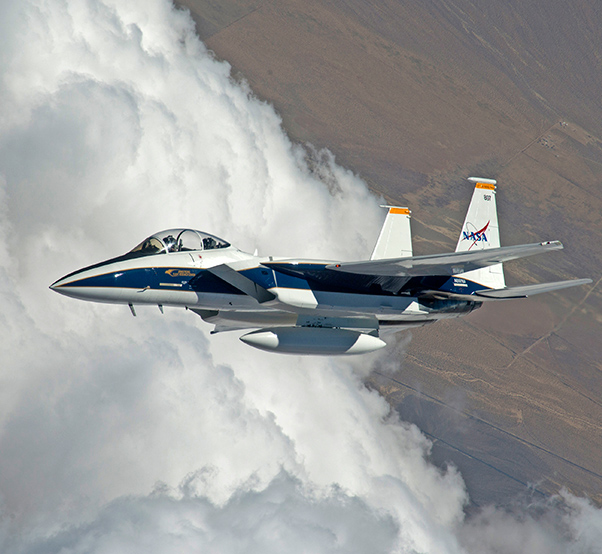 One of the F-15D No. 897 jets recently received its new paint scheme. The aircraft also underwent a very thorough inspection. Although these aircraft typically fly in drier environments, maintenance technicians check every inch of the aircraft for corrosion prior to the aircraft being painted.
The other F-15D, No. 884, is scheduled for painting in February of 2016.
A third F-15B aircraft was already in use and was painted shortly after it was relocated to Armstrong in 1993. The paint is maintained annually, and the center’s aircraft are typically repainted every seven years.