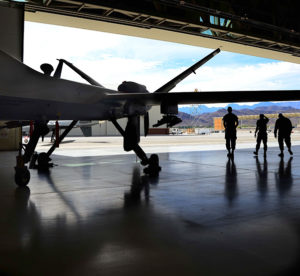 The 558th Flying Training Squadron at Joint Base San Antonio-Randolph, Texas, has increased undergraduate remotely piloted aircraft pilot training class sizes as part of an effort to double the number of graduates beginning in fiscal year 2017.

The 558th Flying Training Squadron ramped up efforts to double the remotely piloted aircraft pilot ranks with the start of its first 24-person class Jan. 11 at Joint Base San Antonio-Randolph Texas.

The larger class sizes are part of ongoing initiative announced by the Air Force in 2015 to increase the number of career RPA pilots across the service.

“The RPA community as a whole is experiencing manpower issues and there is a need to train more pilots to help ease the overall strain on the career field,” said Lt. Col. John Stallworth, the 558th FTS commander. “We have worked diligently since last April to ensure we can meet the increased demand for trained ‘18X’ pilots.”

Previously, RPA pilot training classes started with 12 students; by May, each will begin with 24 students. With 16 projected classes starting each fiscal year, the number of pilots trained annually will jump from 192 up to 384.

One of the big challenges for the unit, which has been the sole source of RPA pilot training in the Air Force since January 2011, during the transition will be increasing overall production by 71 percent during fiscal 16, while at the same time, creating the permanent student production pipeline to be at full operational capability for fiscal 2017, said Lt. Col. Jason Thompson, the 558th FTS director of operations.

“Overall production counts not just students, but also includes the additional instructors needed to handle the increased load,” Thompson said. “There is a considerable amount of moving pieces in regards to getting both the students, as well as the instructors, ready to make this mission a reality.”

To help meet the increased student demands, Stallworth said the unit has hired roughly half of the 42 new instructor billets put on the books, which will see the squadron grow from 62 instructors to 104 over the next few months.

“Our instructor cadre will be roughly 50 percent military and 50 percent civilian,” Stallworth said. “The (instructors) are doing a great job being flexible during this time of growth; they’ve done everything we have asked and more throughout this process.”

To aid in creating the permanent production stream of RPA pilots, the inside of the 558th FTS building is undergoing a major renovation project.

“The renovations include additional simulator rooms, plus additional classroom and office space,” said Maj. Michawn, a 558th FTS RPA flight instructor and officer in charge of the renovations. “Through our detailed planning with the Air Force Civil Engineer Center, the 502nd Civil Engineering Squadron and the contractor, we have mitigated most of the potential impacts to the students or their training time.”

The renovations, costing approximately $1.15 million, started Jan. 18 and are expected to be complete by early July, said Michawn, while noting any delays or deviations to the current plan have the potential to reduce RPA student production capacity.

After the renovations are complete, students will be split into six flight rooms vice the old three, with a typical class of 24 being broke into two halves of 12, Stallworth said. While half the class is working on academics, the other half will be training on the simulators, minimizing down time to the maximum extent possible and at the same time, keeping instructor workloads manageable.
Despite the renovations, the transition to larger class sizes wouldn’t work without the dedicated work of the 558th FTS unit schedulers.

“Our scheduling team has been absolutely critical to making this ‘plus-up’ happen,” Stallworth said. “Between academics and making sure everyone gets their ‘sim’ time in, we haven’t had any major hiccups and this is primarily due to their efforts in thinking through the problems and coming up with flexible solutions.”

Partnering with the 502nd Trainer Development Squadron at Randolph to meet the need for more simulators, work is currently underway to design and build six new instrument simulators, as well as creating hardware and software upgrades to be made to 10 existing simulators to meet the improved training capabilities of the six new simulators, Stallworth said.

The simulators are linked together so students have the opportunity to practice instrument flying procedures in a dynamic airspace environment similar to what they will encounter during real-world flight operations.

“The T-6A-like simulators being developed with the (502nd TDS) will be state of the art and we appreciate the efforts of the entire trainer development team in helping make this happen,” Stallworth said.

Another key element in ensuring mission success is the teamwork that has been on display between all the Joint Base San Antonio mission partners involved in the project, with crucial support coming from the 502nd Air Base Wing’s communications and contracting squadrons.

“The 502nd ABW has been tremendous in supporting the needs of our training mission,” Michawn said. “There have been a few challenges along the way, but all the players are focused on getting the mission done.”

Editor’s note: In accordance with current Air Force guidance, the last names of the RPA operators in this story have been omitted due to operational security constraints.