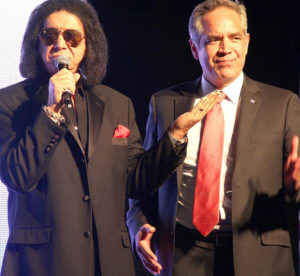 AVBOT Keynote speaker Gene Simmons invites David McBride, the director of NASA’s Armstrong Flight Research Center, to join him on stage. Assuming McBride was a very attractive real-estate agent, McBride told him he was an engineer and that formal education was very important.

More than 800 guests, business people, elected officials, and rock and roll fans gathered at the 44th Antelope Valley Board of Trade Outlook Conference themed “AV Rocks!” to share their success and concerns of doing business in the Antelope Valley.

“I think it just keeps getting better and better,” said master of ceremonies Vicki Medina and AVBOT executive director. Rabbi Eric M. Berk led an invocation, Civil Air Patrol posted the Presentation of Colors, and the Hillview Marching Band played the National Anthem. “We certainly have a lot to be proud of — AV rocks indeed!”

“I had no idea Kern County had so much to offer and such history,” said Jan Tholen, a guest from Ridgecrest, after watching a video narrated by Supervisor Zack Scrivner. “I guess it is true, we take for granted what is in our own backyard- or we just don’t pay attention to what is around us.”

Sharing his pride, Michael Antonovich, Los Angeles County 5th District Supervisor, said he is proud of what the AV has to offer.
Being the epicenter of aerospace where testing can be accomplished year round, “I was elated recently to hear Northrop Grumman received an $80 billion-contract. This is going to be creating thousands of jobs, directly and indirectly.”

With role models from the numerous aerospace companies teaching students engineering, fabrication and flight test, Antonovich said that role models are the best chances for a young person to get an education that leads to a good job and not welfare. He encouraged faith-based organizations to also reach out and become mentors.

Leaders from around the world have come together and agreed that they will work towards decreasing global temperature by two degrees Celsius or less, of the preindustrial times. “I don’t ever remember so many leaders agreeing on one issue. What we are seeing is a fundamental shift in terms of energy mix,” explained Nahal. 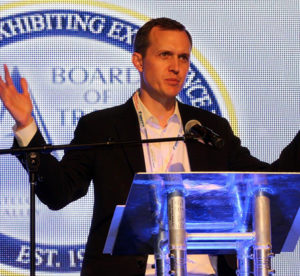 George Whitesides, CEO and president of The Spaceship Company and Virgin Galactic said space travel is critical to many of our planet’s greatest challenges and will play an important role in our children’s future, during the 44th annual AVBOT Outlook Business Conference.

“Last year, 67 percent of energy added to the grid in the U.S. was wind and solar.” Between $300 to $350 billion is being invested towards solar energy around the world each year. “People are putting their money where their mouth is.” Cybersecurity is also growing and is becoming a great demand- over 90 million attacks are reported each year and the number is growing. He held the attention of the audience with information covering global obesity, fertilizers, pesticides, drones delivering for Amazon and 47 percent of American jobs at risk.

Even with affordable housing, good paying jobs and a lot of outstanding schools, all is not sunny.

Dr. Don Parazo of High Sierra Medical said more must be done to help the 4,000 homeless in LA County and that hospitals and medical facilities must be reimbursed for their services.

The AV is also home to some of the highest figures in smokers, diabetes, suicide and depression. “The truth is, a healthy community is essential to a wealthy economy,” said Parazo.

Also encouraging others to invest in the quality of life for those in Mojave, Karina Drees, CEO of Mojave Air and Space Port said that they are spending more time on employee retention.

“Our companies loose too many employees due to quality of life outside our fence line.” Two months ago Monster Fitness opened a gym and already has more than 400 members. “There is absolutely a market demand for this type of business in Mojave.”

Starting out as a general aviation airport in the 1970s, more than 95 percent of the airports revenue now comes from business customers.

Drees credits Stu Witt, her predecessor for branding the airport with the welcoming attitude that companies have freedom and permission to do their jobs. With 130 customers and 70 companies doing business at the center, there is still competition from other states who offer cash incentives; however, Drees says the competitive edge Mojave has is really difficult to duplicate around the country and revenues for the cutting edge companies generate billions in revenue.

According to the FAA, Drees said the global space industry is now a $324 billion industry.

“It is no longer a government only interest. More and more investors are entering this industry. There is something really special about an industry that attracts people who believe in something greater than themselves- they are not dreamers, they are explorers.”
Keynote speaker Gene Simmons shared his heart, often choking up when mentioning his mother.

The co-founder of the legendary rock band KISS, also has a movie production company, a restaurant chain (Rock & Brews) and a TV reality show.

He owes his success to his mother who raised him with manors and would slap him upside the head if he greeted someone without looking at them in the eye. “She cried every time she saw the American flag,” said Simmons who was born in Israel and came to the United States at the age of eight. Simmons believes that partners are one of his biggest secrets to success and one should never miss an opportunity to advertise their business.

Pauline East received the Navigating Change Award 2016 for her success in attracting Hollywood and other film industries to the Valley. Her efforts over the past 17 years has been an economic benefit to the Valley with over $10 million annually in revenues — approximately 300 productions a year.