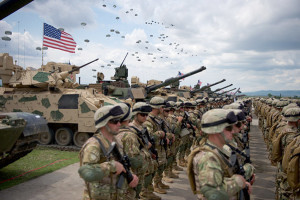 Noble Partner 16 kicked off with an opening ceremony, May 11, Vaziani Training Area, Georgia. The ceremony included static displays of multinational Soldiers and their equipment, airborne operations and speeches from senior officials, including Georgian President Giorgi Margvelashvili.

“We are happy to host you in Georgia and to be part of the noble partnership,” said Georgian President Giorgi Margvelashvili at the opening ceremony. “You are standing on the land which was protected by my ancestors for centuries. You are standing together with men and women from the Georgian Army who are defending our staple, our nation, on battlefields across the world.”

The exercise emphasizes U.S. Army Europe’s abilities to quickly move soldiers and equipment throughout Europe and operate together within a coalition in any potential future operation.

Because of the unique forward location of U.S. Army Europe, over time the organization has built many strong relationships, including the relationship with its Georgian partners. 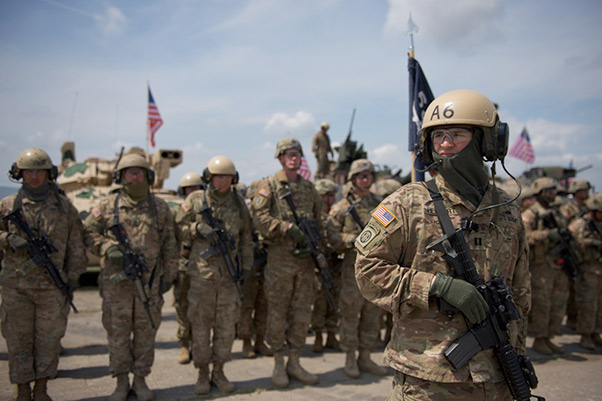 Capt. Samuel Herbert, commander of Company A, 1st Battalion, 64th Armor Regiment, stands ready to begin the opening ceremony for Exercise Noble Partner 16, May 11, Vaziani Training Area, Georgia. The exercise is taking place May 11-26 and includes approximately 1,300 participants from Georgia, the U.K. and the U.S.

“Every time we get to work with our Georgian brothers and sisters it is a great opportunity,” said Col. Jeff Dickerson, the deputy exercise director for Noble Partner 16. “As you saw today, we work together very well. This is an example of what we are going to do over the next two weeks at Noble Partner 16. We will accomplish a lot and we are looking forward to truly demonstrating interoperability between our forces and we are looking forward to continue to improve the readiness of our organizations.”

One of the Georgian companies participating in Noble Partner is part of the NATO Response Force, a highly ready and technologically advanced multinational force made up of land, air, maritime and special operations components. The future two-week training event is a critical part of Georgia’s training for its contribution of a light infantry company to the NATO Response Force and enhances Georgian territorial self-defense capability.

“One of the overarching goals of the NATO Response Force is to ensure the ability of a rapid military force to respond quickly wherever needed whenever a security crisis emerges,” said Nicholas Berliner, the deputy chief of mission at the U.S. Embassy in Georgia. “This exercise helps to achieve that important mission.”

While Georgia is not a member of NATO, it and other NATO partners voluntarily contribute to the NRF. Exercise Noble Partner provides an opportunity for the United States to continue its training relationship with the Georgian armed forces as the sponsor of Georgia’s participation in the NRF.

The ceremony proceeded in traditional military fashion with speeches from high-ranking military and government officials, national anthems of each country and a static displays of U.S. and Georgian combat vehicles and weapons behind the formation. 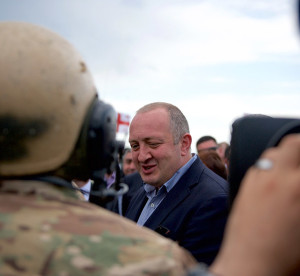 Georgian President Giorgi Margvelashvili meets with U.S. Soldiers, May 11, after the opening ceremony for Noble Partner 16, Vaziani Training Area, Georgia. “We are happy to host you in Georgia and to be part of the noble partnership,” Margvelashvili said.

Paratroopers from the 173rd Airborne Brigade put the final touches on the ceremony while jumping from a U.S. Air Force aircraft onto the drop zone where less than 300 meters away, guests watched closely.

As the ceremony closed, guests were welcomed to take photos with the soldiers and look at the equipment on display.

Included in the audience were hundreds of students from local universities. After the ceremony finished, they were able to meet and speak with the participants and even take a few selfies in front of the tanks and equipment.