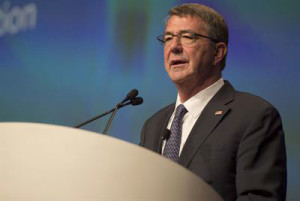 The National Defense Authorization Act for fiscal year 2017 needs to provide budget certainty, Cook said at a Pentagon news conference, noting that Carter has made his views “well known” to lawmakers.

The secretary is worried the House’s version, which reduces funding for overseas contingency operations, would put troops at risk, Cook said.

Concern for future war fighters
“He was very concerned about the impact that would have on warfighters in the future,” he added.

While “thankful” the Senate has not taken the House’s approach, Cook said, Carter has a separate concern about the Senate version.

“There are individual provisions within these bills that we’ve made known we have some issues with, but we remain hopeful that we would be able to work these out in the coming weeks,” the spokesman said.

At a Navy league event in May, Carter said he was opposed to the Senate version’s extensive reorganization of the functions of the undersecretary of defense for acquisition, technology and logistics. The House version, Carter said, was deeply troubling and flawed, and contained “budget gimmickry.”

Carter told the Navy League audience he would recommend that President Barack Obama veto the defense funding bill if it contains a “raid on war funding.”

B-1 Crew Trains with Japan, USS Ronald Reagan in Indo-Pacific