“Turning the ship is an opportunity for the crew to demonstrate for the first time all the procedures required to get the ship underway safely,” said Commanding Officer Capt. Richard McCormack. “Our new pier position will allow the ship and shipyard team to complete the remaining pierside testing required before our upcoming sea trials.”

This operation marks the first time Ford has moved from its pier since coming out of dry dock in November 2013. The ship’s stern now faces the James River. 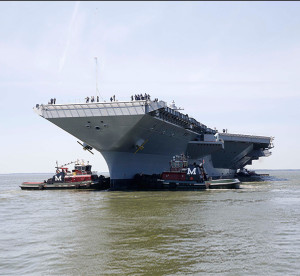 One of the most important accomplishments of the Turn Ship evolution was a “Sally Test”. A Sally Test involves precision draft readings and confirms that there is adequate stability for safe underway operations at sea.

“Turn ship is a big event and the ship moored with the port side to the pier will be a constant reminder that we are one big step closer to taking the world’s most capable warship to sea for the first time,” said Cmdr. Alan Feenstra, chief engineer.

The successful completion of this evolution required the combined efforts of both ship’s company and shipyard personnel.

“The turning of the ship signals the race to the end,” said Newport News Shipbuilding construction supervisor Shayne Laws. “It’s a massive undertaking that requires teamwork, coordination and precision. From the shipbuilders and sailors on board the ship to the team of tugboats helping in the water, this evolution was a success due to the hard work of everyone involved.”

With this major milestone achieved, Ford and its crew continue to work towards commissioning and becoming mission ready.

“This is an exciting event for the crew and demonstrates the impact of their hard work and dedication,” said Command Master Chief Donnie Novak. 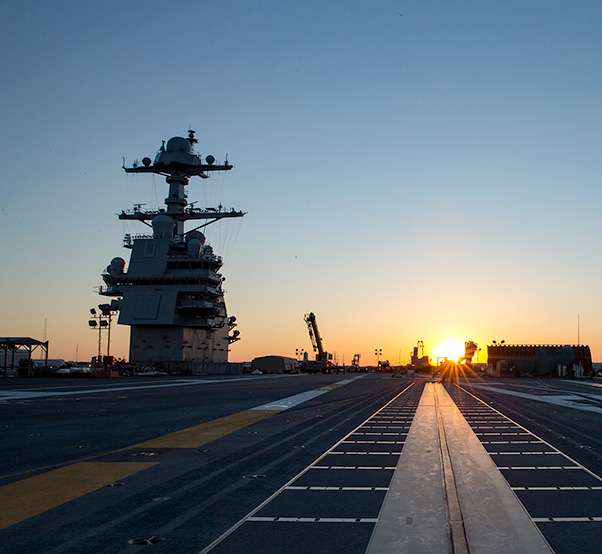 The sun rises over Pre-Commissioning Unit Gerald R. Ford (CVN 78), marking the beginning of the second day of Fast Cruise.