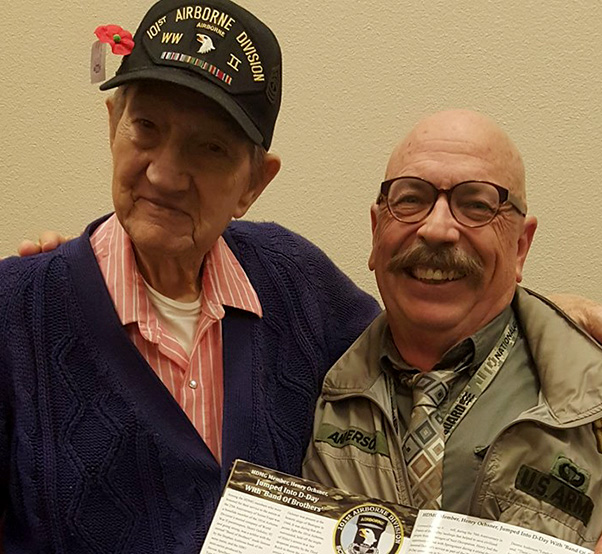 The significant dates about World War II and its calamitous conclusion feel like they flash by nearly as fast as the rate that we lose veterans of the Greatest Generation — about 1,000 a day and accelerating according to actuarials calculated by the Department of Veterans Affairs some years back.

There’s Dec. 7, Pearl Harbor remembrance. And VE-Day, Victory in Europe. And D-Day, the Day of Days. Then the days that mark Hiroshima and Nagasaki and the terrible dawn of the age of nuclear warfare, then VJ-Day.

And these days tell us about the speed-up in losing the mortal company of the ones who fought and won World War II, history’s greatest and most terrible conflict.

There are fewer survivors of World War II every day; as it was with World War I, and the Civil War, and all the wars preceding. So, if life is uncertain, death certain, and only the time unknown — a phrase borrowed from Buddhist philosopher Stephen Batchelor — we have to enjoy each others’ company while we have it.

In this case the company I enjoyed on the 72nd anniversary of D-Day was a veteran of the 101st Airborne Division, the famed “Screaming Eagles” airborne troopers whose story was told by historian Stephen Ambrose in books like “D-Day” and “Band of Brothers,” and by many other recorders of the history.

Once that lot has their hands on your history you are in legacy territory. Live or die, today, or tomorrow, and you will live on with the other immortals in the memory books.

The impact of “Band of Brothers” was so sweeping that it prompted millenials to sign up and become paratroopers, and it inspired spin-offs, like the autobiography of the company commander, Dick Winters, C.O. of Easy Company, 506th Parachute Infantry Regiment.

For years at the Valley Press, on the anniversary of D-Day I would try to track down a survivor or two to share their story for a younger audience, which would be most of us. One of them was Lew Shoemaker, a high school football coach who waded ashore with the Big Red One, a draftee and reluctant warrior who made it home to teach at Quartz Hill High School and marry a sweetheart he met in a military hospital after he was wounded out of the war.

I finished my work at the Valley Press a little over a year ago, but the dates still flash past, and because I’m a lucky guy, sometimes the friends still show up.

On this June 6, 72 years after the “Day of Days,” I called up Henry Ochsner, who lives in California City with his wife of 70 years, Violet.

“We’re getting by,” Henry said, cheerfully. “We are doing all right.”

Was the Day of Days on his mind 72 years after the events that changed his life and the shape of the world forever?

What the paratroopers and glider troops of the 101st Airborne did was to climb into C-47 transports, two-engine Douglas aircraft, packed with paratroopers, and other of the “Dakota” transports towing glider-borne troops that swooped in carrying artillery and jeeps.

As the invasion that began before dawn on D-Day got underway, the paratroopers and glider troops were heavily engaged, scattered across Normandy, and fighting for their lives.

As soon as the 321st Glider Artillery Battalion deployed into Normandy from ships off Omaha Beach, it provided fire support and forward observers for the paratroopers of the 506th Parachute Infantry Regiment, whose exploits were recounted in “Band of Brothers.”

The aircraft, part of the vast D-Day armada, took off in the pre-dawn darkness to drop tens of thousands of young men hours ahead of the seaborne landings at Omaha, Utah, Juno, Gold and Sword beaches. The young men were from the 101st and 82nd Airborne Divisions, joined by the British Airborne, and other Allies.

Crossing the Channel, the planes thundered past the Normandy coastline and the German anti-aircraft fire made a deadly fireworks of the night sky, tracer rounds and flak, some of the aircraft exploding, some catching fire and spinning into a death spiral and fireball. Meanwhile, thousands of young men, many of them still in their teens, waited for a green light by the door, and the jump command “Go!” that would propel them into the windstream, and the fire-filled night.

Some parachutes failed, streamered, sending young men plummeting to earth, their bodies bursting like melons. Some were shot from the ground while still in their canopies, and other young men plunged into fields that had been flooded, and they drowned without firing a shot.

The Drop Zones became mostly imaginary, with elements of both divisions scattered across miles of French hedgerow country. As Ambrose recounted, they landed, grouped up with buddies they had never met, heading toward destinations, they knew not where.

For most of the campaign in Western Europe, the glider artillerists of the 321st worked side-by-side, or just to the rear, of the 506th Parachute Infantry Regiment, according to the official history of the 101st Airborne Division.

Thousands of young men from two scattered divisions found their way to the fight at D-Day, all the while sowing mass confusion among the legions of Nazi soldiers trying to repel history’s greatest airborne and seaborne invasion.

With the sunrise, the town of St. Mere Eglise became a rally point, an objective of the 82nd’s “All American” Division, but they were all mixed together with plenty of the “Screaming Eagle” troopers from the 101st Airborne.

The Americans consolidated around St. Mere Eglise and took pressure off the thousands of their G.I. and Allied brethren wading ashore on the landing beaches, and they moved forward to skirmish and fight it out in the ancient farming country of the Norman coast.

As Ambrose recounted, the next 11 months would be terrifying, filthy, hungry, without rest, and relentless in tempo and terror. And for the ones who lived through it, like Lew Shoemaker, the draftee, and Henry, who served with the 101st Airborne, the early days around D-Day would be defined by moments, that gave way to hard days and nights, to months, and to all the years ahead.

A German POW who spotted the Luger in his belt “told me that if the Germans caught me with that, I’d be dead. I dropped it in the river.”

For the ones who got home, to marry, to work, to build families, everything they did after would be marked by the Day of Days, and all the days that followed.

A year after the end of the war, Henry was in Seattle near a Greyhound bus terminal with a cafe nearby where his sister worked as a waitress. His sister, Pauline, aka “Mickey, like Mickey Mouse,” had a friend at the cafe named Violet.

“I told Mickey I’d like to go out with her,” meaning Violet. “I had a ’37 Dodge coupe.” Violet insisted that Mickey would sit in the middle between them.

They went to a barn dance “with Western dancing in a really, really big barn.”

“After about two or three months, I asked her to marry me, and she said ‘Yes,’ and we have been together ever since,” Henry said. “It’s been wonderful. We have had the sickness, and health, the richer, and the poorer. You stick together. We haven’t had a lot, but we are getting by now.”

Henry provided for a family driving trucks for a living and logged 750,000 accident-free miles, a record he is proud of right now.

On the 70th Anniversary of D-Day, Henry accepted a trip to revisit the Normandy beaches and hedgerow country, and he visited the Airborne Museum at St. Mere Eglise, that records the achievements and harrowing struggles of the paratroopers and their glider-borne brethren.

On the 72nd anniversary of D-Day, Henry said that he and Violet “had a wonderful day, doing not anything in particular.”

“I made tomato sandwiches, he said. “The tomatoes were green, a little on the hard side, but I made ’em anyway.”