The situation in Afghanistan remains “precarious,” President Barack Obama said here today, and that is why he will keep 8,400 U.S. service members in country through the end of his term.

The president was joined for the announcement from the Roosevelt Room at the White House by Defense Secretary Ash Carter and Marine Corps Gen. Joe Dunford, the chairman of the Joint Chiefs of Staff.

“As president and commander-in-chief, I have made it clear that I will not allow Afghanistan to be used as safe haven for terrorists to attack our nation again,” Obama said. “I strongly believe that it is in our national interests, especially after all the blood and treasure we’ve invested in Afghanistan over the years, that we give our Afghan partners the very best opportunity to succeed.”

The decision means the United States will maintain a presence in both Kandahar and Jalalabad. The president’s announcement comes shortly before he departs for the NATO Summit in Warsaw, Poland, July 8-9, where leaders will discuss the situation in Afghanistan.

There has been undeniable progress in Afghanistan, the president said, but the country — one of the poorest in the world — needs more time to develop governmental, military and economic capabilities.

The first U.S. troops went into Afghanistan in October 2001, he said, and attacked al Qaeda. The terror group planned the 9/11 attacks against the United States behind a shield erected by the then-ruling Taliban. The aim was to stop Afghanistan from ever being able to be a safe haven for terrorists.

“We pushed al Qaeda out of its camps, helped the Afghan people topple the Taliban and helped them establish a democratic government,” the president said. “We dealt crippling blows to the al-Qaida leadership, we delivered justice to Osama bin Laden and we trained Afghan forces to take responsibility for their own security.” 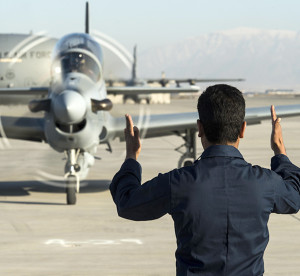 An Afghan airman marshals in an A-29 Super Tucano at Hamid Karzai International Airport, Afghanistan, Jan. 15, 2016. The U.S. troop level in Afghanistan will constitute 8,400 members through January 2017 to help support Afghan security forces as they increase their capabilities, President Barack Obama said at the White House, July 6, 2016.

The number of American forces will be higher than planned but the missions will remain the same, the president said. Those missions are to train and to advise Afghan forces and to support counterterrorism efforts aimed at the remnants of al-Qaida and the Islamic State of Iraq and the Levant, which is trying to gain a foothold in the country.

Afghanistan is still dangerous, as witnessed by the deaths of 38 Americans in the country since combat operations stopped in December 2014, Obama said. “We resolve to carry on the mission for which they gave their last full measure of devotion, the president said.

The United States is a leader, but it’s just one nation among many seeking a safe and stable Afghanistan, Obama said. There are 41 allies and partners working in the country, fielding more than 6,000 troops of their own. The Afghan security forces have more than 320,000 members and they are providing security for the people.

“But these forces are not as strong as they need to be,” Obama said. “With our help they are still seeking to improve critical capabilities such as intelligence, logistics, aviation and command and control.”

The Taliban remains a threat, the president said, and in some areas they have actually gained ground against government forces.

“My decision today also sends a message to the Taliban and all those who oppose Afghanistan’s progress,” he said. “You have now been waging war against the Afghan people for many years. You’ve been unable to prevail. Afghan security forces continue to grow stronger and the commitment of the international community — including the United States — to Afghanistan and its people will endure.”

The only way the Taliban can end the conflict is to negotiate with the government on a lasting political settlement, Obama said.

The president said his decision will allow his successor the leeway to make changes in the U.S, mission in Afghanistan.

Following the announcement, Defense Secretary Ash Carter said in a statement that military and defense leaders made the recommendation to the president. The recommendation was made in consultation with Nicholson; Army Gen. Joseph L. Votel, the U.S. Central Command commander; and Dunford.

The U.S. troop level in Afghanistan “will enhance our ability to continue progress on our two central missions in Afghanistan: strengthening Afghan forces so they can secure their nation and prevent its use as a safe haven for terrorists,” Carter said. “In consultation with President [Ashraf] Ghani, Chief Executive Abdullah and the Afghan government, we and our NATO partners remain determined to help the people of Afghanistan secure a more peaceful future.”