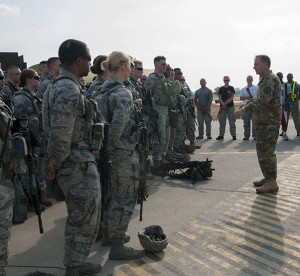 U.S. Air Force Chief of Staff Gen. David L. Goldfein speaks to 39th Air Base Wing Airmen Aug. 17, 2016, at Incirlik Air Base, Turkey. Goldfein spoke to the Airmen on their importance to the mission at Incirlik.

Air Force Chief of Staff Gen. David L. Goldfein visited 39th Air Base Wing airmen and their coalition partners at Incirlik Air Base, Turkey, to view firsthand the ongoing operations and inform Airmen here of what they can expect of their 21st CSAF.

Incirlik Air Base, a strategic location situated in southeast Turkey nearly 70 miles from the Syrian border, has been has been flying counter-ISIL mission in support of Operation INHERENT RESOLVE in Iraq and Syria since Aug. 12, 2015. The installation provides critical insight to decision-makers, including Goldfein, about operations and air superiority.

“Air superiority is like oxygen,” Goldfein said. “If you have it, you don’t even think about it. If you don’t have it, it’s all you can think about.”

During his trip to Incirlik Goldfein saw several groups of Airmen who demonstrated how they’re keeping up with the increasing demand for airpower during the ongoing missions in Iraq and Syria. During a conversation with Airmen Goldfein explained his vision as CSAF.

Goldfein explained, as the Air Force Chief of Staff there are many challenges to face. He said the story of the U.S. Air Force, both present and future, is a story of equal parts: challenge and opportunity.

“I want to be straight up with you,” Goldfein said. “It’s going to be difficult when it comes to some of the challenges we face, but we are optimally suited right now to reverse negative trends during the next 10 years.”

Goldfein said the way he, with the help of Secretary of the Air Force Deborah Lee James, intends to face the challenges is by focusing on three things, revitalizing squadrons, the joint capacity for warfighting, and taking leadership on multi-domain command and control missions. 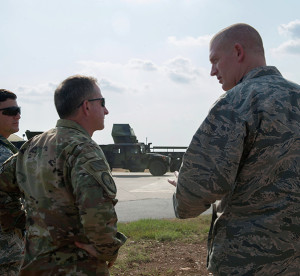 Revitalizing squadrons
“The first thing, which you may have already seen, is the revitalizing of squadrons,” Goldfein said. “Go back 15 years of trades; people are coming down, mission is growing at an exponential rate, security levels are going up. The first thing we’re going to look at is, what does a 21st century squadron looks like?”

Goldfein said Airmen should not to expect him to have an unlimited amount of manning or resources to revitalize squadrons, but instead the focus on squadrons is going to be an internal readjustment to get squadrons back on track.

“I truly believe squadrons are the heartbeat of the Air Force,” he said. “That’s how we associate ourselves. This is how we develop Airmen. This is where our culture resides.”

“I think JTFs will go from crisis response to enduring over time,” Goldfein said.  “And, if the air component is going to be essential in every one of the operational plans then we’ve got to be ready to step in and lead them as JTF commanders with core staff that speaks the language of the warfighter… If you and I are not able to step in there and hit the ground running then we’re behind the power curve and that’s not what our nation needs.”

One of the things the U.S. is better at than any of our adversaries is building coalition with our allies and partners, like right here in Turkey Goldfein said.

Taking leadership on multi-domain command, control
“The future of warfighting, in my mind, is going to be networking, it’s going to be multi-domain, and because we are the service that has command and control in one of our five core missions we’ve got to take lead on that going forward,” Goldfein said. “We need to take lead to make sure we are able to network together the joint capabilities that senses the globe in air, land, sea, space cyber and undersea and then connects that to an effects grid that produces effects for the joint team and nation.”