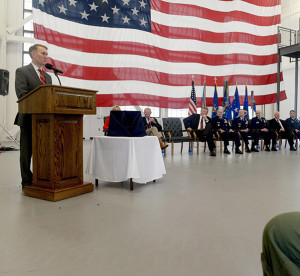 U.S. Sen. James Lankford, from Oklahoma, gives a speech at the “Forging the 46” event, Aug. 30, 2016, at Altus Air Force Base, Okla. The event consisted of an assumption of command for the reactivated 56th Air Refueling Squadron, dedication of the new KC-46 training facility, speeches from key Air Force and community leaders and concluded with a tour of the new facility for attendees.

A new training center for the KC-46 Pegasus was officially dedicated at Altus Air Force Base, Okla., Aug. 30, 2016, along with the activation of the 56th Air Refueling Squadron, which will be the formal training unit for the Air Force’s next-generation refueling aircraft.

The integration of the KC-46 into the Air Force is one of the top three aircraft modernization programs intended to maintain global vigilance, reach and power.

“Today’s event marks an important milestone for (Air Education and Training Command) and the United States Air Force,” said Lt. Gen. Darryl Roberson, the AETC commander. “Safety, proficiency and the ability to make the complex seem routine were the hallmark of the Air Force’s refueling training with Altus (Air Force Base) leading the way. Today, we stand again, on the shoulders of giants, as we reach a new milestone in dedicating our newest formal training unit, the 56th ARS.”

The new center, named the Leverett Formal Training Center, will be vital to future Air Force aerial refueling and joint service operations since it will serve as the first stop for all KC-46 aircrew members.

“Members of the 56th ARS are AETC’s and the Air Force’s first KC-46 aircrew members,” said Lt. Col. Daniel Ruttenber, who assumed command of the unit. “The 56th ARS activation and dedication of the formal training unit is truly a paradigm shift in air refueling and continuation of the long tradition of the 56th (ARS).”

Community partners made a point to recognize the unique partnership between Altus AFB and the city of Altus.

“With the KC-46 coming to Altus, a lot of good things are going to happen and it’s all thanks to the community,” said U.S. Sen. Jim Inhofe from Oklahoma.