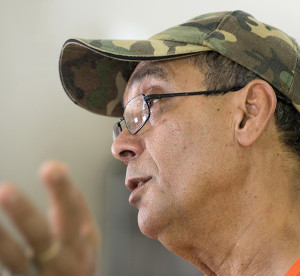 During weekly meetings at American Legion Post 47 in Cabo Rojo, Puerto Rico, a Vietnam veteran told fellow veterans dealing with post-traumatic stress disorder how he maintains his resilience through his faith and brotherhood with his fellow vets.

Former Army Sgt. Jorge Zambrana was born in Cabo Rojo and grew up in New York. He volunteered to serve in Vietnam, hoping to be a clerk.

But once you got to Vietnam, he recalled, you took whatever job was needed.

“I was assigned to the 1st Air Cavalry,” he said. “We used to pick up all the KIAs [killed in action], WIAs [wounded in action] and their belongings and drive them from Bien Hoa Air Base to Tan Son Nhut Air Base to Saigon. It used to be a few days drive back and forth.”

Zambrana ended up contracting malaria in Vietnam. He was sent to New Jersey for a few weeks to recover before returning. He served as a truck driver, a mechanic, a clerk and a cook.

Second Vietnam tour
During Zambrana’s second tour in Vietnam, he said, he started having bad dreams.

“I was assigned to this place called Whiskey Mountain near Phan Thiet,” he said. “I was stationed at a cemetery. I used to have dreams that my uncle came out of the Catholic church in Cabo Rojo. I would see myself in the coffin, and I would be laughing. I would tell my mom, and she’d say, ‘Oh, it’s because you’re going to come home OK.'”

During Christmas 1970, Zambrana said, he was waiting with others to get out of Long Binh to go to Australia for rest and relaxation, when they had incoming enemy fire.

“Everybody started running. I dove into that safety bunker,” he said. “There was a big hole where the missile had landed. The bunker where the hooch I had just been at was gone. It was like God wants you to live, whether you believe in him or not.”

Zambrana was later medically evacuated on a C-141 aircraft during his second tour.

“I saw my first sergeant sitting next to me on a stretcher, and I said, ‘What are you doing here?'” he recalled. “[The first sergeant] said, ‘A whole bunch of guys got killed, but some of us made it.’ I praise God every day. I’d do it all over again, because freedom is not free. Puerto Ricans like myself, born and raised in New York, we understand that.” 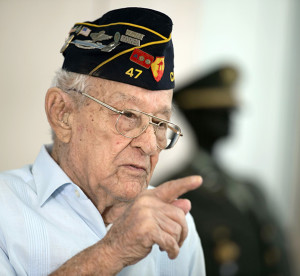 Challenges
Racism was a challenge before and during the Vietnam War, Zambrana said, noting that he ran into racism during training at Fort Jackson, S.C., eight months before he went to Vietnam.

“I saw that they had white water and colored water,” Zambrana said. “We didn’t have that back in New York. If we went to Columbus, the main city there, we were always getting into trouble, because … we all hung out together. There, if you went to a restaurant or a bar, you had to go to a black bar or a white bar.”

When he got to Vietnam, he said, a Mexican-American gang made him get a tattoo and stick with them, because there was a lot of racism. “I told my buddies to follow the rules,” he added. “We couldn’t get a haircut or shine our boots, because we were in the mud. We just did our job.”

Because many of the Puerto Rican Army National Guardsmen couldn’t speak very much English at that time, Zambrana said, he would be asked to help translate.

“I tried to help them as much as I could,” he said. “Anytime I saw an injustice and they needed a translator, they would call me up or I would volunteer. I got along with the blacks and the whites. One guy used to call me [a slur] because I look like I’m Vietnamese, even though I’m Latino. He helped me make rank, though.”

Theology school
Zambrana was medically discharged from the Puerto Rico Army National Guard in 1996, and he earned his bachelor’s degree in theology last year from Johnson University through the University of Phoenix.

When he worried about passing his courses, Zambrana recalled, one of his instructors told him, “You made it through Vietnam twice; you’re going to make it through here.”

Zambrana was the youngest of his mother’s seven surviving children. She had 10 children.

“When it came to graduation time,” he said, “there were tears coming down my face. I promised my mom, ‘Mom, before I die, I’m going to graduate from something.’ When I came back to Cabo Rojo, Puerto Rico, I went to the cemetery where she’s buried with a copy of my diploma. I know she’s happy in heaven.”

Shared faith, support
Zambrana said he shares his faith with his brothers and sisters in arms at his PTSD meetings, and it helps him with his panic attacks.

“I haven’t had any attacks in the last seven years. The last one I had was in Tampa in a [Veterans Affairs] hospital,” he said. “Now I can share my knowledge. As a chaplain, if one of the guys starts crying, I’ll take him outside and say, ‘let’s pray’ and hug him. We try not to look back, but we still have some bad dreams and wake up sweating. I try to stay up with my medication. We saw a lot of guys go home in plastic bags. I cherish every day I come here.”

Zambrana said he’s proud of his heritage and joined the Army because of his uncle, retired Army Sgt. 1st Class Santiago Pabon, who served with the 65th Infantry Regiment in World War II and Korea.

“I love that old man. He’s one of my heroes in this world,” he said. “He was a sergeant in Korea, and he talks about how the privates saved his life many times. He’s a very proud veteran.”

Zambrana said he would still serve if he could. “I’m ready to die with my boots on,” he said. “If I got called to go back in, I’m still fit at 65. I can carry an M16, whatever. I still have good eyesight. I still know the rules of engagement.”

Helping others
For now, Zambrana said, he is working with family members who are completing their Puerto Rico Youth ChalleNGe Academy program and looking at joining the military.

“I’m also trying to open up a bilingual school, and get books donated, so more Puerto Ricans can learn the language. I had that advantage when I was in the military,” he said.

Zambrana said being Puerto Rican has helped him in many ways through the years.

“We’re hardworking people and very brave,” he said. “We take a lot of chances. In Vietnam, there were so many fruits the American soldiers wouldn’t eat, but we would eat them. We wouldn’t go hungry. We weren’t stuck eating the C-rations. We’re American citizens. I wish we were a state and I could vote for the president, but I’m very proud of my service.

“I would do it all over again,” he continued. “There are a lot of soldiers here willing to fight for their freedom of democracy. Only under democracy are we able to enjoy all this freedom.”

Zambrana said he’s proud of the Puerto Ricans who have served before him and who continue to serve. “The United States can be very proud they have that unity with Puerto Rican citizens,” he added.