College students built Mars rovers at a competition Oct. 16 through 19 at NASA Armstrong Flight Research Center’s Office of Education at the AERO Institute in Palmdale, Calif.

The competition was a workshop coordinated and implemented by AFRC through the NASA Community College Aerospace Scholars, or NCAS program. It gathered 40 community college students from around America to learn about engineering, practice teamwork and complete simulated Mars missions using miniature, programmable robotic rovers.

The students split into four teams: Red, Green, Gold and Blue. Each team received a mentor from NASA and a small set of snap-together components to build their rovers. The teams had a simulated budget for their components, which required them to be lean and efficient with their designs.

The rovers completed two challenges. In the first challenge, they retrieved rocks from a mock Martian boulder field. Retrieving larger rocks earned higher scores. The most valuable rock was a smooth pebble placed atop a model of Olympus Mons, thought to be the largest volcano in the solar system.

The teams designed a range of contraptions to retrieve the rocks. Some designs attempted to scoop underneath the rocks, while others used claws to grab the targets and drag them away. Regardless of their design, each rover had to automatically drive to their targets, retrieve them, and then automatically drive back to a home base. Rocks dropped outside home base were not scored.

Although teams could not physically alter their rovers between retrieval runs, they could reprogram them. Some rovers went too far and tumbled off the course, but others drove to and from their targets successfully, which made their teams erupt in cheers. 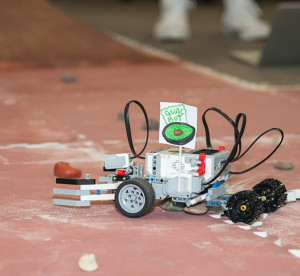 “It was definitely a once in a lifetime opportunity,” Gilmore said. “I felt like being part of a team like that was just a great experience. This was definitely a small glimpse of the real world of engineering.”

For the next challenge, rovers rescued stranded rovers from the boulder field. Various rover components large and small were scattered across the field. Smaller components and those attached to wheels proved especially challenging to capture, while teams typically retrieved larger components within one or two attempts.

The Green Team, with their rover Guacbot, won the rescue challenge — nearly retrieving the Olympus Mons rock in the process.

Armstrong’s Michelle Haupt, the NASA mentor for the green team, said the experience was rewarding for her team and herself.

“It was exciting to see that their hard work paid off, and that they worked well as a team,” Haupt said. “I love being a mentor. It’s my passion to help inspire the next generation, so it was a lot of fun to talk to students and encourage them to work at NASA.” 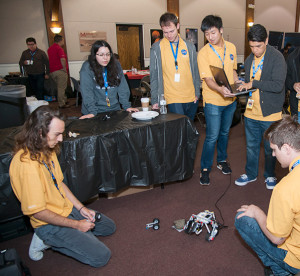 “This experience is invaluable,” Vohra said. “You can’t learn the lessons they teach you here anywhere else. If you might want to work for NASA, this is the perfect opportunity to get your foot in the door.”

NCAS is a national program organized as a partnership between NASA and Oklahoma State University. The program, which is based at NASA’s Johnson Space Center in Houston, gives authentic NASA engineering experiences to community college students at workshops nationwide. NCAS students complete a five-week online learning course before participating in the workshops.

AFRC’s Office of Education plans and implements all the center’s educational activities, including workshops for students and educators.

To learn more about NCAS, including related opportunities for middle and high schoolers, visit https://nas.okstate.edu/ncas/. For more information about AFRC’s Office of Education, visit http://www.nasa.gov/centers/armstrong/education/.