During a wreath-laying ceremony at National Memorial Cemetery of the Pacific at Punchbowl in Honolulu Dec. 2, USS Arizona survivors were joined by their families, service members and civilians to honor their fallen shipmates lost during the Pearl Harbor attack.

The observance started when four of the USS Arizona survivors — Lauren Bruner, Lou Conter, Ken Potts and Don Stratton — were “piped aboard” by an honorary boatswain’s mate. Active-duty service members, veterans and USS Arizona survivors rendered a hand salute as the Joint Base Pearl Harbor-Hickam Honors and Ceremonial Guard paraded the colors.

Following opening remarks and the invocation, Jaqueline Ashwell, National Park Service superintendent and guest speaker, read an archived letter to the Navy chief of the Bureau of Navigation from a mother, whose son was killed while serving aboard USS Arizona.

The letter recounted the emotional rollercoaster of Mrs. John Griffin, who pleaded for news on the whereabouts of her son, a question that had, unbeknownst to her, was already answered by the tragedies of war.

“If he is gone, God bless his young soul,” Griffin’s words called through Ashwell. “All I can say, if he died, just the way he wanted to die in the service of his country and democracy.”

After finishing the letter, Ashwell remarked how important, as curators of history, we are entrusted with educating future generations about memories like Griffin’s letter.

“Every visitor, American or not, should visit the Arizona Memorial and look at the wall to see several sets of brothers, fathers and sons who served on the same ship,” said retired Rear Adm. Samuel Cox, director of the Naval History and Heritage Command and one of the distinguished guests. “They didn’t expect war to happen that morning, but every one of them did their duty and gave everything for their country.” 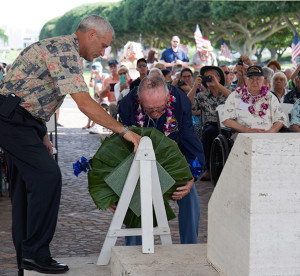 Pearl Harbor survivor Donald Stratton (right) and his son Randy Stratton lay a wreath down on behalf of the USS Arizona Reunion Association during a ceremony to honor the fallen men of the Pennsylvania-class battleship USS Arizona at the National Cemetery of the Pacific at Punchbowl in Honolulu.

According to Cox, the names on the wall serve as a reminder of the perfect cross-section of immigrants and people who came from all over the country to serve together and made the ultimate sacrifice together.

“When you looking at the freedoms that we have today, they were bought at the cost with the lives of the Sailors and Soldier,” continued Cox. “The Constitution is great, the Bill of Rights is great, but the reason that we have them 200 years later is because of the blood of Sailors and Airmen, Soldiers and Marines who made the sacrifice so we can still have those freedoms.”

The ceremony concluded with a prayer, a moment of silence and a gun salute.

During the playing of taps, Pearl Harbor survivor Don Stratton and his son, Randy, laid a ceremonial wreath in front of the memorial that appropriately read, “In these gardens are recorded the names of Americans who gave their lives in the service of their country and whose earthly resting place is known only to God.”