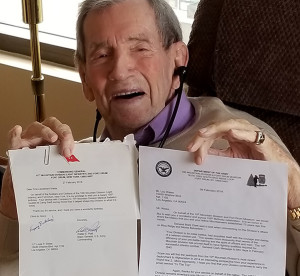 Louis Weiss made a name for himself in the entertainment industry as a talent agent, representing celebrities such as Barbara Walters and Howard Cosell during a 70-year career at the William Morris Agency. But before that, Weiss served his country during World War II as an officer of the newly formed 10th Mountain Division.

Weiss started working at the William Morris Agency in the mailroom — a job facilitated by comedian George Burns, his maternal uncle. He worked his way up to a promotion in the night club department. But when the first peacetime draft was instituted in the United States, it wasn’t long before the 22-year-old Weiss received his notice.

Assigned to D Company, 10th Mountain Medical Battalion, Weiss moved from Camp Bowie, Texas, to Camp Swift, Texas, on Nov. 30, 1944. Soldiers from the 10th Mountain Division had moved from winter warfare and cold-weather survivability training at Camp Hale, Colo., for flatland training at Camp Swift. On Christmas Day, Weiss and his unit departed by train for Camp Patrick Henry, Va., where they made final preparations for deployment.

Due to security reasons, the troops were not informed of their destination until they were well out to sea. The 10th Mountain Division arrived in Naples, Italy, in January 1945, and the unit saw near-continuous combat until the German army surrendered on May 2, 1945.

In the book, “The Mailroom: Hollywood History from the Bottom Up,” Weiss described his tour in Italy this way: “It was not a European pleasure trip.” He said that his mind was on survival, not show business.

While he was serving overseas, the agency put aside 10 percent of his weekly salary so that he would have money upon his return. Weiss said that life was different when he returned to work — the agency had changed in the four and a half years he was gone, and so had he. “War makes you grow up fast,” he said. He was determined to make a career with the agency and he developed a passion for the business.

From signing nightclub acts to becoming worldwide head of television in New York, then chairman and, finally, chairman emeritus, Weiss dedicated 70 years of his life to the entertainment industry, working for the same company until he retired in 2007.

“I don’t know of anyone who’s worked for one company for 70 years,” said his grandson, Brian Weiss. “He’s just an incredible person.”

Weiss said that while his grandfather underwent radiation treatment for cancer, he once shared an elevator ride with three firefighters and a police officer. His grandfather always wears his Yankees clubhouse jacket and a 10th Mountain Division hat, so when the first responders saw the Army patch, one of them mentioned that his brother also served in the 10th Mountain Division.

“He’s always wearing the hat, and every now and then he talks about his time in the Army — never in any detail or anything, but just mentions it,” Weiss said.

Weiss said that whenever his grandfather would share a story with him about his time in the Army, it would be a lesson learned. By mentioning his struggles in combat, he was telling his grandson how he can persevere over any challenge.

“The small stories he did tell me — his military advice to me — were invaluable,” Weiss said. “It was always about how I can improve myself, which actually helped me quite a bit.”

Weiss said that his grandfather has many plaques and awards in his L.A. home from his career as an agent, but only a few items from the 10th Mountain Division and his time in service.

That prompted Weiss to see if he could commemorate his grandfather’s 100th birthday on March 22 by adding something new to his scant collection. The former first lieutenant received two birthday greetings — one from Maj. Gen. Walter E. Piatt, 10th Mountain Division (LI) and Fort Drum commander, and another from Sepp Scanlin, 10th Mountain Division and Fort Drum Museum director. Piatt wished the former first lieutenant a happy birthday and thanked him for his service, which he wrote “helped shape the Division to what it is today.”

Along with the birthday message, Scanlin sent a copy of the 10th Mountain Division yearbook that highlights the 2014 deployment in Afghanistan.

“My grandfather was very well-known in the entertainment industry, and so whenever he gets something sent from any organization, the first thing he thinks is, ‘Oh, they want money,'” Weiss said. “But this package was from the U.S. Army, so he didn’t know what to think.”

Weiss said that while he was on the phone with his grandfather he could also hear his grandmother, who just turned 96.
“She was saying, ‘Lou, don’t open it, they want your money. Don’t open it.’ And I’m on the line telling him to open it,” Weiss said. “I said, ‘trust me, open it.’ So he finally opens it, and he was totally blown away.

“Him living this long, I thought it would be cool if he could tell his great-grandkids that he was part of World War II, and that he was remembered on his 100th birthday,” Weiss added. “I was excited that it worked out the way I was hoping it would. I know he was very moved over all of it.”