The “Gate Keepers” at the Mojave Air and Spaceport received a new paint job recently, just in time for summer visitors.

“It is so important to keep our historic aircraft looking good,” said Cathy Hansen, president of the Mojave Transportation Museum, speaking of the Convair 990 and F-4 Phantom that sit at the entrance of the spaceport. “They are our Gate Keepers that first greet our guests and they have such a tremendous history. They look wonderful.”

Polychrome Construction Inc. won the bid to paint the historic aircraft. The company is well-experienced in interior and exterior decoration aspects of buildings, theaters, restaurants and historic renovations; however, the huge Convair was a welcome challenge and addition to their portfolio.

“We are not used to dealing with wind and these conditions, so we took advantage of every nice day we could,” explained Marios Polychronas, who was lead painter on the project which took approximately four weeks to complete. He also came up with his own blend of paint to make the coverage last 20 years. “It was a great experience and we learned quite a lot about this aerospace community, just from people stopping by.”

The company contracts throughout California and is based in Northridge. 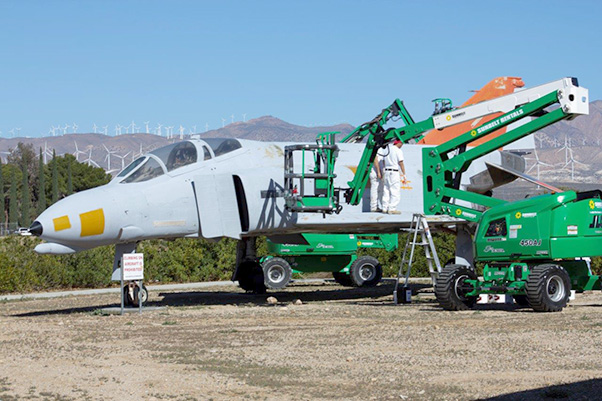 “I love to watch the planes fly overhead — this is a pretty incredible place.” Spiro said he has always been intrigued by the shape of planes and could name a lot of them flying over Mojave, although some were pretty strange-looking to him. Working in Mojave piqued his interest in aircraft and aerospace even more.

The late Dan Sabovich, then general manager of Mojave Airport, was there to meet his friends and said that the Convair would permanently be displayed at Mojave, recalls Hansen, who was there on that historic day. A NASA F/A-18 flew chase with the CV-990 and Dryden research pilot Ed Schneider did a fly-by with the Hornet after the 990 landed.

“At the time, I was just excited to see another piece of aerospace history come to live at Mojave Airport, but now I realize this aircraft is remarkably important, having been flown by some of the greatest names in aviation history. 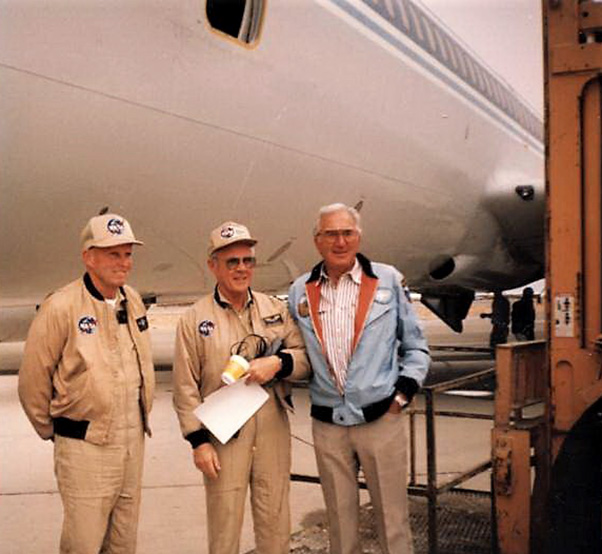 From left: Gordon Fullerton, Tom McMurtry and Dan Sabovich stand in front of the Convair 990 after delivering it to Mojave Oct. 24, 1996.

“Gordon Fullerton was a NASA astronaut from 1969 until 1986 and Tom McMurtry was a U.S. Navy pilot flying F9F Cougars, who went on to fly for NASA as test pilot in the X-24 Lifting Body. How wonderful to meet two of the greatest test pilots during my lifetime!” exclaimed Hansen.

The Convair 990 was used by NASA as a medium-altitude research platform and Landing Systems Research Aircraft (LSRA) for the Space Shuttle program.

Tom McMurtry passed away Jan. 3, 2015, of complications from a stroke. He was 79. He was known for his exploits behind the stick of such aircraft as the triple-sonic YF-12C, the U-2 and F-104, during a career that included more than 15,000 flight hours.