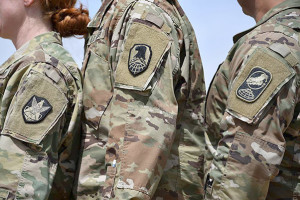 Ever since humans took to the skies in hot air balloons, aerial attack has been a viable wartime strategy.

Airplanes became faster and reached higher and higher into the sky. With the advent of rockets and missiles during World War II, attacks could come from greater distances with more speed.

In recent decades, the possibility of attacks from the other side of the world — missiles soaring through outer space — has become a real threat to the United States.

As these threats continue to evolve and advance, so do the capabilities to track and defend against them.

On the forefront of this military space domain is the U.S. Army Space and Missile Defense Command/Army Forces Strategic Command, an extensive force with personnel assigned in 11 time zones at 23 worldwide locations, connected by a commitment to defend the United States and its allies.

With this unified blend of globally dispatched service members and civilians, USASMDC/ARSTRAT is the model Army multi-component force.

U.S. Army Lt. Gen. James Dickinson, commanding general of SMDC, said his vision is to have “one synchronized team (that) develops and provides leading-edge space, missile defense and high altitude forces and capabilities for the warfighter and for the Army — wherever and whenever required.”

Approximately 70 percent of the Army’s systems are space-enabled to provide Soldiers the ability to fight and win. Space-enabled capabilities are critical to the Army and are fundamental to every U.S. military operation.

“Homeland defense is a core competency of the National Guard. With the ground-based midcourse defense mission it is a great fit to have the National Guard execute this responsibility,” said U.S. Army Brig. Gen. Tim Lawson, SMDC deputy commanding general for operations, of the 100th Missile Defense Brigade.

“SMDC/ARSTRAT is the resident expert when it comes to missile defense and Army space,” said Lawson. “This makes the multicomponent nature of the command a great fit and provides critical backing at the Headquarters, Department of the Army and joint staff levels.

“There is only one GMD brigade and only one space brigade (1st Space Brigade) in the Army and they are under SMDC, operationally,” said Lawson. “We are able to provide training and support for both GMD and space forces to all components. The 1st Space Brigade has a Reserve battalion assigned to it. The 100th has active-component Soldiers permanently assigned to it. In both cases, this is virtually seamless.” 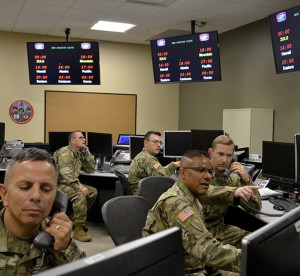 The 1st Space Brigade also has a direct support relationship with the Colorado Army National Guard’s 117th Space Battalion. This is the only National Guard space battalion and includes 12 ARSSTs.

The 117th Space Battalion currently has one ARSST deployed to USCENTCOM and is preparing to mobilize three more teams in 2019.

For 100th Missile Defense Brigade Soldiers, working side-by-side with a large force of Department of Army civilians and contractors while immersed in a high-tech environment has a corporate feel to it, said U.S. Army Staff Sgt. John Beshers.

Beshers served as a combat engineer in the active-component Army for five years, including multiple deployments, and also served on the Patriot system. He said when he was assigned to the 100th Missile Defense Brigade, he had never heard of the unit. Now, he works in the Missile Defense Element at Schriever Air Force Base.

“It is different not having Soldiers to lead, but the networking between active-component officers and noncommissioned officers is great,” said Beshers. “Crews facilitate a work-life balance very well.”

The schedule for a missile defense crew at Schriever, and the redundant crew of the 49th Missile Defense Battalion, is rigid, but predictable, U.S. Army Maj. John Trahan said.

“The work on crew is suited to individuals who prefer technical work, decentralized operations, and are detail oriented,” said Trahan, who is a missile defense crew deputy director in Colorado Springs. “Overall, crew life is frequently compared to being ‘deployed-at-home’ where you work 12-hour shifts, but get to go home at night.”

“Multicomponent integration has its challenges,” said Lawson. “However, I believe that we have certainly established what ‘right’ looks like when it comes to multi-compo. I think the importance of the GMD mission has really dictated that we cannot fail. We have to get this right. National Guardsmen defending the homeland goes a long way with this, as well.

“We are almost two decades into this mission and it is better today than yesterday,” said Lawson. “We all understand that we have to work together to successfully execute this mission and if we fail, we will all fail together. That is not acceptable.”