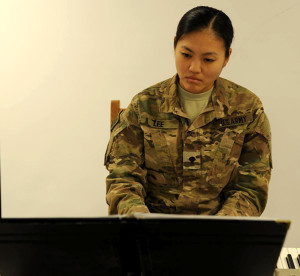 Army Spc. Anne Lee plays the piano during an event on Bagram Airfield in Afghanistan.

BAGRAM AIR FIELD — Among Army Spc. Anne Lee’s earliest memories, she said, is being a young girl staring at the pianist during Sunday church services and wondering what it took to make that kind of music.
“I think I was about 5 years old or so, and I was fascinated by the music she played,” she said. “Every chance I’d get, I’d sneak over after service to sit with her and tap on the keys. Soon afterwards, I started taking piano lessons.”
Today, she’s not only an automated logistics specialist serving here as part of the 1st Armored Division’s Resolute Support Sustainment Brigade, but she’s also an accomplished classical pianist who’s performed concerts around the world — including New York City’s Carnegie Hall.
Cultivating Talent
The daughter of Protestant missionaries, Lee was born Yi Pyung-An in Hwajung, South Korea, and immigrated to Los Angeles at about age 18. Soon, she was given the opportunity to play piano during her father’s church service, and it was then she met Chung Chang-mi.
Chung was already an accomplished classical pianist when Lee met her. She’d come to Los Angeles from New York City to host some piano recitals. Chung had already trained countless pianists, and by chance, happened to attend Lee’s church and heard the way she played, Lee said. Chung would later become her mentor and biggest inspiration for the talents she displays today on the keyboard, Lee added.
“She was the first one who said she thought I had perfect pitch on the keyboard,” Lee said. “At that time, I was playing piano during Sunday services at our church and after service one Sunday, she asked my parents if I could come to her studio and take lessons from her.”
Chung invited Lee to come to New York with her and continue training, Lee said. “It was such a great opportunity, but at that time, my family couldn’t afford for me to move away so I couldn’t go with her,” she added.

Quick Ascendance
Chung decided to remain in Los Angeles for several months to teach, and Lee continued taking lessons from her and learning as much as she could. Lee said she was like a sponge, clinging to Chung’s every move as her fingers floated across the keys. Lee said Chung’s teaching intensified her love for an instrument that she said has become a huge part of who she is. And before Chung eventually left Los Angeles to return to New York, she gave Lee a baby grand piano so that she could continue to perfect her talents.
Lee continued to practice her craft and at 19, enrolled in Pepperdine University. After becoming a member of the university choir, she was soon promoted to the position of lead classical pianist.
“When I first met the choir director, I remembered him asking me, ‘Where have you been, because I’ve never heard anyone so young playing like that before!'” she said. “That opened yet another door for me because before I knew it, I was the music director — and then he hired me to be the lead accompanist for the university’s master choir. He really believed in me and gave me so much confidence, even when I was second-guessing myself.”
Soon, Lee was touring with the university choir across the United States and Europe. She said she remembers some special moments during mission trips to Turkey and Bulgaria that changed her life.

A Greater Cause
“I met so many children during those trips that were super-talented, yet because of economics, never had the chance to explore their talents,” Lee said. “That’s when I decided that I wanted a more meaningful career than just playing music and at about age 30, I met some Korean War vets who really inspired me.”
Lee said it was during those times with the vets who’d sacrificed so much that she realized she wanted to honor them by becoming a part of something bigger. Had it not been for their sacrifices years ago, she said she’d never have had the opportunity to immigrate to the United States.
So, on Aug. 6, 2012, she joined the U.S. Army and is now serving on her second deployment to Afghanistan.
“Having a chance to play the piano for people and have them enjoy it is a part of my religious testimony,” said Lee, who currently serves as the lead pianist for Bagram’s Enduring Faith Chapel’s Protestant Service. “It’s just what God has blessed me with and where he’s leading me as part of his plan. It’s all a part of being something bigger than I am.”