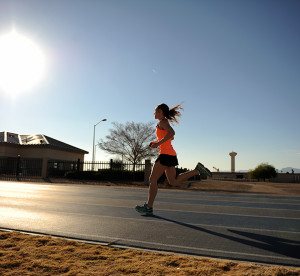 Senior Airman Melissa Franks, 56th Aerospace Medicine Squadron flight medicine medical technician, runs on the track at Luke Air Force Base, Ariz. Franks can run 1.5 miles in 9:15 and has placed first in all the 5-kilometer runs she’s attended at Luke in the female category.

LUKE AIR FORCE BASE, Ariz. — She runs the 1.5-mile run in 9:15 and she’s placed first on all the 5-kilometer runs she’s attended. Like a machine, she zones out and focuses on the task at hand–running.
“I’ve been running for 15 years,” said Senior Airman Melissa Franks, 56th Aerospace Medicine Squadron flight medicine medical technician.  “I started running as a means to get in shape for basketball. Believe it or not, I actually hated running when I first started, and I  was terrible at it.”
She joined the cross country team in her sophomore year of high school.
Franks’ outstanding performance in cross-country landed her a running scholarship Yavapai Community College in Prescott, Ariz., for two years, before she went on to run at Canisius College in Buffalo, New York.
“My first year of college I won All-American at our National Championship race, which is the biggest race of the season,” Franks said. “That moment was huge for me. It was then I realized my running potential”
For Franks, running has many rewards and benefits.
“Yes, running is hard, and like everyone else, half the time I hate it too,” Franks said. “But it’s a great way to boost cardiovascular fitness. Working in the medical field and having a bachelor’s in exercise and wellness, I know the importance of taking care of your health. I’ve seen firsthand health complications, both mentally and physically, that can occur from living an unhealthy lifestyle. With experience, I realized how to improve and overcome those ‘hard’ runs. The feeling of accomplishment that follows from improvement, or my ‘runner’s high,’ is what keeps me coming back for more.”
While the training involved to build speed varies, what doesn’t change is running regularly.
“When I finally grasped the concept of consistency, that’s when I began seeing results,” Franks said. “I’m a firm believer in endurance before speed. My training involves running an average 4.5 miles, four days per week. The first few months of running, I run a slow conversational pace. Following, a typical week consists of one conversational paced run, a tempo run which is medium speed, and a sprint workout.”
For one Airman, without Franks’ support and training, scoring 100 percent on the fitness assessment seemed far away.
“I used to run a little bit in the past, but because of Senior Airman Franks I started running a lot more,” said Senior Airman Franko Salazar, 56th Medical Operations Squadron emergency medical technician. “Senior Airman Franks taught me how to pace myself. She also is the one who got me into running. We ran together three to four times per week. She inspires me to push myself and do better. With her help I scored 100% on my last fitness assessment.”
For those who have a desire to get better at running but don’t know where to start, there is hope.
“Running is half physical and half mental, so it takes practice–lots of practice,” Franks said. “As any runner can attest, the first few months are often the hardest. Start small, and don’t be ashamed if you have to walk. Most importantly, commit to a routine, stay consistent with your workouts–this is key. Endurance before speed, but remember speed and strength workouts are necessary for improvement as well.”
For questions concerning how to improve run times, call 623-856-5902 to speak with Marlyn Shults at Health Promotions.