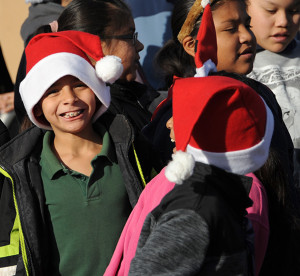 DAVIS-MONTHAN AIR FORCE BASE, Ariz. — U.S. Airmen carried on a tradition of giving this holiday season, donating and delivering presents to about 1,200 grade schools students at four schools in southern Arizona.
The Santas in Blue program began in 1965 when four Airmen, from the 571st Strategic Missile Squadron now deactivated, decided to collect toys as gifts for the children who lived near the missile silos south of Tucson.
“We got a lot of joy, laughs and smiles from giving out those gifts to the children,” said retired U.S. Air Force Chief Master Sgt. Richard Moorman, one of the original four Airmen who started Santas in Blue.
Fifty years ago, a helicopter carrying Santa Claus with a bag of donated toys flew to San Xavier Mission school to kick-off the first Santas in Blue event by D-M AFB. This year, Santa Claus arrived once again in a helicopter to the same school keeping the tradition alive.
“I think this is the highlight of the year for the families and students,” said Shirley Kalinowski, San Xavier Mission School principal. “Santas in Blue helps out the community and gives the schools something to look forward to every year.”
The schools had each child create a gift list with two or three items they would like from Santa Claus. D-M AFB Airmen then sponsored students and purchased one or more of their gift requests.
As they did back in 1965, and every year since, gifts were handed out to students by volunteer Airmen for the 50th straight year.
“I’m going to remember being able to bring joy to all ages,” said U.S. Air Force Master Sgt. Hunter-Nichols, a Santas in Blue coordinater and 12th Air Force (Air Forces Southern) executive support superintendent. “We were able to give gifts to a lot of different age groups. It’s nice to see those smiles from everyone.”