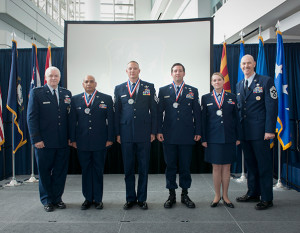 The four Air National Guard 2016 Outstanding Airmen of the Year shared their inspiring field experiences and enthusiasm with senior leadership at the Air National Guard Readiness Center at Joint Base Andrews, Md., during the Focus on the Force Week, Aug. 1-5.

Hosted by Chief Master Sgt. Ronald C. Anderson, command chief master sergeant for the Air National Guard, Focus on the Force Week is a week-long series of events highlighting the importance of professional development for Airmen at all levels, and celebrating the accomplishments of the enlisted corps.

“These Airmen are the very best of us,” said Anderson. “I appreciate what they’ve done, and I know they’ll do some great things for us in the future. It is absolutely all of our honor to be with them this week.” 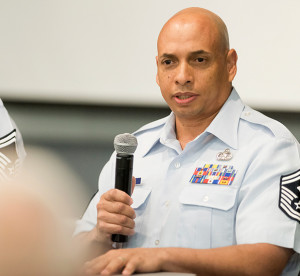 Senior Master Sgt. Jack N. Minaya, first sergeant with the 214th Reconnaissance Squadron, Arizona Air National Guard, and the ANG Outstanding First Sergeant of the Year, gives remarks during the Focus on the Force Week’s “Outstanding Airmen of the Year Panel.” Focus on the Force Week is a series of events highlighting the importance of professional development for Airmen at all levels, and the recognition of accomplishments throughout the enlisted corps.

The honorees brought the perspective of the more than 91,000 enlisted ANG Airmen to discuss issues with senior leadership throughout the week. They met with ANG Director Lt. Gen. L. Scott Rice and Anderson, as well as with the Enlisted Field Advisory Council, an advisory panel of command chiefs from across the country. The Airmen also had the opportunity to sit on a panel during the Chiefs’ Executive Course, an orientation course for newly-promoted chief master sergeants in the Guard, and field questions about their experiences.

The Airmen of the Year tell us their stories and the challenges they’re facing in their wings and states,” said Chief Master Sgt. James L. Brown, EFAC chairman. “Every issue the Airmen bring up is an important issue that doesn’t only affect them. It likely affects hundreds if not thousands of other Airmen. These young Airmen give us great confidence that the next generation of the ANG will be in fantastic hands.”

Anderson also challenged leaders to ensure that each Airman has the opportunity to succeed.

Farmer was also selected as one of the U.S. Air Force 12 Outstanding Airmen of the Year. He will be honored at the annual Air, Space and Cyber Conference scheduled for September in Washington, D.C.