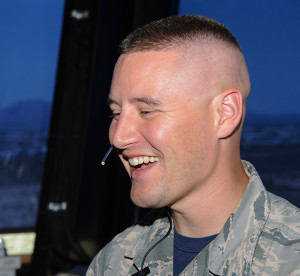 Air traffic controllers have one of the most demanding and stressful jobs in the Air Force. With no room for error, they must be calm, decisive and quick thinking in order to be effective.

“I really had no idea something like this would happen,”Lagapa-Talbott said. “It was a great surprise.”

Lagapa-Talbott was recognized as an exceptional performer but his career field heavily relies on unit cohesion.

“I feel like a lot of it is team effort,” Lagapa-Talbott said. “As far as air traffic control, you always have an assist somewhere. Somebody is always looking out for you, whether it’s the watch supervisor or the person working to your left or right. The trainers provide a lot of time and effort for me to develop my skills and to become the air traffic controller I am now.” 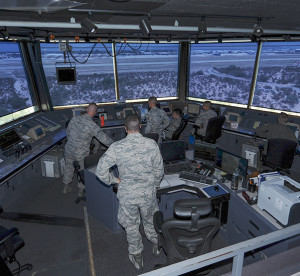 The advancing controller’s energy and constructive reception to criticism resonates with his supervisors.

“KT is a controller you can rely on to get in position and work to the best of his ability,” said Staff Sgt. Alex Donovan, 355th OSS ATC. “He looks up to the controllers with more experience in the career field and is always looking to improve his skills.”

Before stepping into The Blue, Lagapa-Talbott’s vision to become an ATC stemmed from the influence of some of his family members.

“My brother-in-law works as a civilian and he’s the one that enlightened me to the career field,” Lagapa-Talbott said. “My grandfather was in the military so I decided to follow his path in the Air Force and go in as an air traffic controller. I kind of got the best of both worlds.”

After the Air Force-level award winner became operational, his interest for ATC began to grow into a passion.

“My favorite thing on a day-to-day basis is the rush when it gets really busy,” Lagapa-Talbott said. “When you’ve got multiple aircraft in the pattern, you get that adrenaline rush when you’re trying to figure out which ways to work things. It’s like working a puzzle at high speed.” 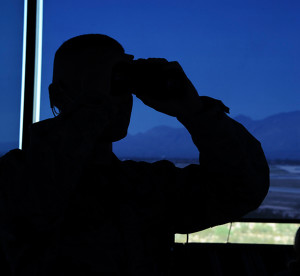 Of course, you don’t just walk off the street into an air traffic control tower without first completing an extensive amount of training. ATCs transition from two months of tech school training to an average of 12 to 18 months of on-the-job training at their first duty station, where even then, the training still doesn’t stop.

“This job isn’t for everybody,” Lagapa-Talbott said. “You have to think quickly on your toes, especially in the tower facility. A lot of it is just making it up as it goes, being very reactive and quick-thinking, and a lot of problem solving in a matter of seconds. You don’t have time to sit there and work out the problem for an hour or two, you’ve got to have a decision and act on it. And whatever results from that, you have to continuously make decisions based on your previous ones.”