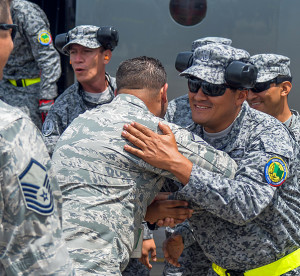 Colombian and U.S. Air Force Airmen greet each other after the Colombians arrived to Barksdale Air Force Base, La., Aug. 13, 2016. The Colombian Airmen, along with four A-29B Super Tucano aircraft, are at Barksdale to participate in Exercise Green Flag East Aug. 15-29, 2016.

The Colombian contingent arrived Aug. 13 and immediately started engaging with their U.S. Air Force counterparts in order to prepare for the two-week exercise.

“Participating in exercises like this are important to improve the interoperability with other air forces,” said Colombian Air Force Brig. Gen. Rodrigo Alejandro Valencia Guevara, the commander of the Colombian contingent. “It’s important to know different people and different cultures.” 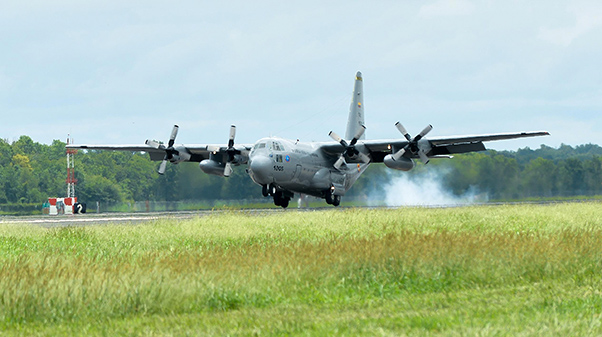 “I take great pride and satisfaction in training aircrews as well as ground crews for deployments,” said U.S. Air Force Maj. Greg Theriot, Green Flag East air operations officer. “Everyone who comes through here at some point will employ their weapon system. When you see them do that in a safe and legal way, that saves lives; it’s very rewarding.”

In addition to the mission aspect, multi-national engagements such as this Green Flag East allow Airmen of these partner nations to build upon a years-long relationship.

“In this global age that we’re in, we’re practically neighbors,” Theriot added. “Our countries share similar values, and it’s important to keep this partnership strong.” 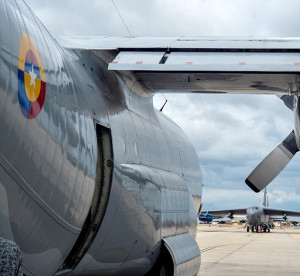 A Colombian Air Force C-130 Hercules sits on the ramp after offloading personnel and cargo at Barksdale Air Force Base, La., Aug. 13, 2016. The Colombians arrived to Barksdale to participate in Exercise Green Flag East.

Two weeks before Green Flag East kicked off, a Colombian general served as the Combined Forces Air Component Commander for U.S. Southern Command’s PANAMAX, which is a command-and-control exercise focusing on a nearly 20-nation coalition. This Green Flag East iteration is another example of the special relationship between the two countries.

“On behalf of my Air Force team here, and the Colombian Air Force commander, we appreciate being able to participate in this special exercise,” the general added.

In addition to the Colombian aircraft, U.S. Air Force A-10s from Moody Air Force Base, Ga.; F-16s from the Texas Air National Guard; KC-135s from McConnell AFB, Kansas; E-3s from Tinker AFB, Okla.; and E-8s from Robins AFB, Ga.; will participate in the exercise.