High winds and dust whipped the uniforms of two Airmen as they attempted to rescue a woman trapped in the cab of her semitractor-trailer.

One of them applied his might to the piece of metal that kept the woman confined to her vehicle and the other held the door of the vehicle while trying to guide her down the steps of its cab toward safety.

The next instant, just as the woman was reaching the threshold, something came crashing into the rear end of her vehicle at high speed. The two Airmen were thrown ten feet from the vehicle by the impact and as soon as they finished a quick buddy check, they raced back to continue helping the woman in distress.

“We were traveling out to Gila Bend, to our drop zone,” Hardin said. “We ended up coming up to a dust storm and losing visibility almost completely.”

The Airmen were experiencing a Haboob; an intense wall of dust and debris carried by a weather front. 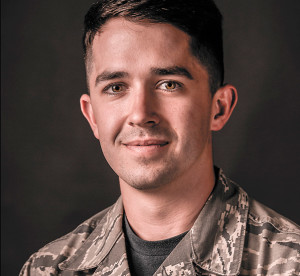 Fullmer pulled the vehicle over to the shoulder of the road and decided to wait out the storm.

When the Airmen regained visibility, they saw the end of a semitractor-trailer on the roadside ahead, along with some passenger vehicles on the shoulder.

A woman from one of the passenger vehicles approached the Airmen’s car and briefed them on the situation at hand. A semitractor-trailer rear-ended the back of another.

“Myself and Sgt. Fullmer got out of the vehicle, went up to the accident and started assessing the situation to see what we could do to help,” Hardin said.

When the first responding officer arrived, the Airmen updated him on the situation. The officer set up traffic control and asked the Airmen to triage those who were injured in the pileup.

While looking over the wreckage, the Airmen noticed a woman trapped inside the cab that was lodged in the back of the first trailer.
They evaluated her injuries and then began helping her out of the cab.

“That’s when a third semi-truck, at approximately 40 mph, impacted the whole mess,” Fullmer said. “It shifted both of the first semi-trucks enough that it impacted Airman Hardin and myself and threw us about ten feet.”

After looking each other over for injuries, Fullmer and Hardin got back to the cab and found the woman pinned between the door and the side of the truck. An EMT certified officer arrived on the scene, and began assisting the Airmen. They were able to un-wedge the woman from her vehicle’s door frame so they could continue to assist the rest of the injured motorists.

They found a man with lacerations on his leg, were able to remove his shirt, then used it to wrap the wound as they had learned in military courses such as self-aid and buddy care and survival, evasion resistance and escape.

“It just clicked, an instant evaluation of where his injury was and what his mental state was as far as shock,” Fullmer said. 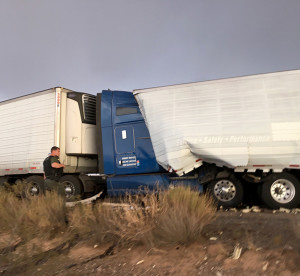 Fullmer continued to help the EMT officer while Hardin returned to help the woman, who was now free from the vehicle’s door frame but still stuck in the cab. More officers had arrived and they were able to pry the door open enough for Hardin to climb inside and help the woman out through an escape hatch.

By now, the heavy presence of EMT officers had control of the situation. Fullmer and Hardin took a few minutes to themselves to relax and grab a drink of water.

“I’m very happy it was Airman Hardin and myself (out there) because of our similar mentalities,” said Fullmer. “We were able to work very effectively together without really communicating to each other.”

With their unexpected task complete, they got back in their vehicle and continued west to their drop zone.