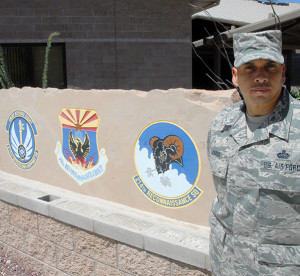 The Air National Guard’s Outstanding First Sergeant of the Year, Senior Master Sgt. Jack Minaya answered the call of other first sergeants at the Arizona National Guard’s 162nd Wing and became a representative of the United States Air Force’s most important assets, its people. His efforts to recognize outstanding Airmen, desire to see them succeed and top priority of taking care of people, help him personify the time honored title.

TUCSON, Ariz.–It is common to see a first sergeant spotlight the accomplishments of outstanding Airmen while remaining in the shadows, but this time the spotlight is on the Arizona National Guard’s Senior Master Sgt. Jack Minaya as the Air National Guard’s Outstanding First Sergeant of the Year.

Minaya was selected for this honor among all other Air National Guard members serving in the special duty career field. First sergeants are leaders serving in a position rich in custom and tradition with the goal of enhancing health, morale, readiness and quality of life within their units.

In 2014 with his military service spanning 22 years, he was planning a retirement not a career change.

“I didn’t realize it at the time, but my wing’s First Sergeant Council was seeking me to fill a position,” he said. “They urged me to put in my package and board for the job, so I did.”

He answered the call of the other first sergeants at the 162nd Wing and applied to become a representative of the U.S. Air Force’s most important assets, its people.

After being chosen for the position and attending the First Sergeant Academy at Maxwell Air Force Base, he hit the ground running in an unfamiliar environment. 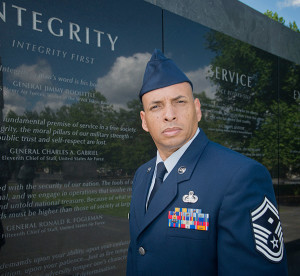 Minaya who spent most of his active duty, ANG and civilian careers in the communications and cyber fields, now entered the world of the Remotely Piloted Aircraft at the 162nd Wing’s 214th Reconnaissance Group.

“When I first started here, I had no idea what the 214th was all about,” said Minaya. “I knew it was a predator mission and that was the extent of my knowledge of what the people here do.”

The men and women of the 214th provide persistent intelligence, surveillance and reconnaissance capabilities to combatant commanders around the world 365 days a year.

Minaya said, as a first sergeant, a mission that never stops, provides a new set of challenges when working to meet and serve Airmen and their families.

“All the different shifts make it tough to get to know people and keep track of who is working when,” said Minaya.  “I had to learn what effects a 365 day operation had on Airmen and their families.  I also had to figure out how to take care of people that are on mission all year long without a break.”

Minaya quickly realized that overcoming these obstacles would require flexibility.

While he was a traditional guardsmen working his civilian information technology officer job full-time at the U.S. Customs and Border Protection, he made a point to drop in at the 214th before or after his shift to check-in.  Now serving full-time at the 214th he remains flexible to meet the needs of the Airmen working rotating around the clock shifts. 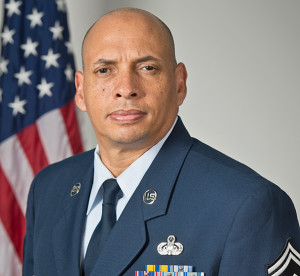 “My number one priority is taking care of people and in order to do that here, I adjust my schedule during the day, work weekends, get out of my office and meet with Airmen every day,” said Minaya.  “I want to get to know them personally, so I ask about their work and their family. I handout awards and promotions because I especially like to see our members grow and excel in their careers.”

His efforts to recognize outstanding Airmen, desire to see them succeed and top priority of taking care of people, help him personify the time honored title of first sergeant.