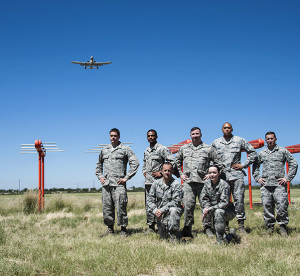 Airmen from the 355th Operations Support Squadron pose for a photograph in front of Runway 12’s newly activated Instrument Landing System as two A-10C Thunderbolt II aircraft fly above Davis-Monthan Air Force Base, Ariz., Sept. 15, 2016. The ILS provides approaching aircraft with horizontal and vertical guidance relative to the centerline and the threshold of the runway for an accurate landing approach.

The internationally standardized system assists pilots during the final approach for landing.

“It’s a navigational aid used by the pilots,” said Capt. Chance Landreth, 355th Operations Support Squadron Airfield Operations Flight commander. “It’s really necessary when there’s bad weather which we have during monsoon season. This is a big deal because we had the system for Runway 30, but not for Runway 12, which is our primary runway.”

The ILS provides approaching aircraft with horizontal and vertical guidance relative to the centerline and the threshold of the runway for an accurate landing approach.

The upgrade enables D-M to redirect approaching aircraft depending on weather without the worry of having to utilize a runway that employs a primitive approach system.

“We’re now going to be decommissioning a piece of equipment that has become almost obsolete in the Air Force,” said Master Sgt. Laurel Maples, 355th OSS NCO in charge of airfield systems. “This is more up-to-date technology and it will allow all of our aircraft to get as close to the runway as possible during inclement weather.”

The final steps of the ILS installation process were capped off with a commissioning flight which occurred late last month.

“They fly multiple approaches and make sure the equipment is calibrated properly and safe to use,” Maples said. “The technicians will apply specific adjustments to make sure that the system’s outgoing data is being received correctly by the approaching aircraft.”

After successful testing and calibration, the system is fully operational thanks to units across D-M AFB.

“This was a 10 year team effort from inception to actual employment,” Landreth said. “The 355th Civil Engineer Squadron laid all of the foundations down to put the equipment in place. The 355th Logistics Readiness Squadron helped out with storing the equipment while we planned the installation. This system is made up of a lot of other systems talking to each other, so we had to thank the 355th Communications Squadron for their hard work as well.”