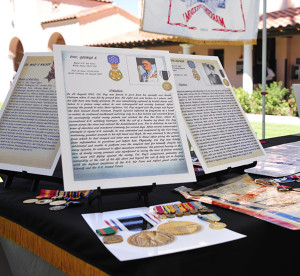 Prisoner of war memorabilia is displayed during a POW/MIA recognition ceremony at the Veterans Affairs main campus in Tucson, Ariz., Sept. 16, 2016. Tucson veterans who were captured during World War II, Vietnam and the Korean War provided memorabilia from their experiences as POWs to be displayed during the ceremony.

Every year D-M and the SAVAHCS alternate honoring prisoners of war and those missing in action.

“With each POW and MIA recognition day we reaffirm America’s gratitude to all service members,” Short said. “But specifically to those members that experienced the horrors of wartime captivity and those families with loved ones who remain missing in action. Those of us who serve in uniform today are inspired by the fierce resolve of generations of American POWs.”

At the front of the auditorium, a table set for one stays vacant while holding a white cloth, red rose and ribbon, a slice of lemon with salt and an inverted glass.

“The table symbolizes the fact that members of our profession of arms are missing from our midst,” said Helen Fifield, American Ex-Prisoners of War previous commander. “They are commonly called POWs or MIAs. We call them brothers. They are unable to be here with us, but we do not forget them.”
Each part of the ceremony is symbolic of the struggles POWs, MIAs and their families went through. 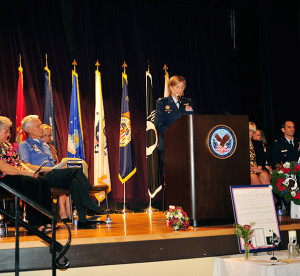 Col. Jennifer Short, 355th Fighter Wing vice commander, speaks during a POW/MIA recognition ceremony at the Veterans Affairs main campus in Tucson, Ariz., Sept. 16, 2016. The ceremony was held in honor of prisoners of war and those who are still missing in action.

Following the missing man table ceremony, the names of 63 Arizona residents were read who were MIA during World War II, the Cold War, the Korean War and in Vietnam. Immediately after, 52 names of those MIA who have family living in Arizona were also read.

Maj. Josh Appel, 306th Rescue Squadron flight surgeon, gave a speech about his career and the importance of remembering POWs and those MIA. During his service Appel encountered countless members who served selflessly and some who gave their lives.

“These sacrifices and selfless acts, although sad and tragic are easy to honor,” Appel said. “We award medals, name ships, parks and military bases after these people. But what about those sacrifices we don’t know about, that’s hard. How do we honor those people whose fate we still do not know? And that’s a challenge for us all today. There’s a saying ‘people are not truly gone until their names are no longer spoken,’ so please lets continue to speak these names and never ever forget.”

To conclude the ceremony, the audience was encouraged to go outside and watch the missing man flyover performed by four A-10C Thunderbolt IIs from the 354th Fighter Squadron. During the flyover a single A-10 broke away from the formation to symbolize the service members who are still missing in action.

“The ceremony brought tears to my eyes knowing there are individuals that are willing to do whatever it takes to defend our nation and our freedoms,” said Luke Johnson, SAVAHCS assistant public affairs officer. “I have the utmost respect for the veterans that were honored during the ceremony because they endured a lot during their imprisonment at the hands of the enemy.” 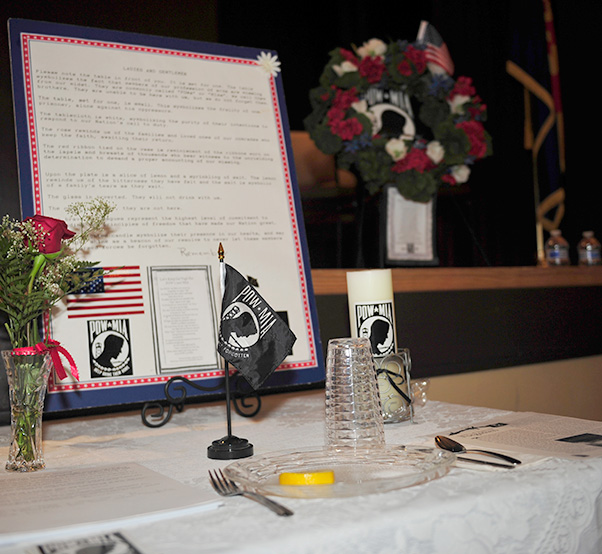 A table set for one stays vacant during a POW/MIA recognition ceremony at the main veteran’s affairs campus R.E. Lindsay Auditorium in Tucson, Ariz., Sept. 16, 2016. The table cloth symbolizes the purity of their intentions, the rose of the families and loved ones who await their return, the red ribbon shows the determination to demand proper accounting for those missing, the lemon is symbolic of the bitterness they faced and the salt represents the tears of their loved ones. Finally the inverted glass and empty chair and to show that they are still missing.